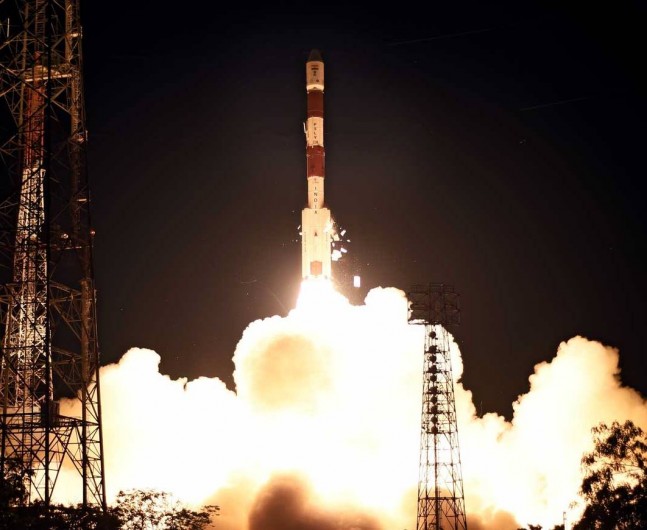 One of the Indian Space Research Organisation's Polar Satellite Launch Vehicle lifts off from the Satish Dhawan Launch Site with the PSLV-C28 mission on July 10, 2015. Photo Credit: ISRO

The countdown for the mission, designated PSLV-C28, started on Wednesday when the propellant filling operations commenced. The SDSC’s Mobile Service Tower with the rocket was placed into launch position on Thursday at 07:00 local time (9:30 p.m. Wednesday EDT; 01:30 Thursday GMT). Five British satellites being encapsulated in the payload fairing for the PSLV-C28 mission. Photo Credit: ISRO

The first stage of the PSLV separated about two minutes after the launch. Next, the second stage ignited, followed by a payload fairing separation at approximately 2 minutes and 34 seconds into the flight. The rocket’s second stage separated at T+4:22. Four minutes later, the separation of the third stage occurred, leaving only the fourth stage that started deploying the satellites around 18 minutes after the mission launch.

Three DMC3 satellites were released first, just seconds before 18 minutes on the mission clock. De-OrbitSail was deployed 40 seconds later, leaving only CNBT-1 left which was also put into orbit 40 seconds later after the previous one.

The deployed satellites then ran their initial in-orbit sequence and are programmed to eventually check-in with their respective ground stations to begin orbital operations to transition to an operational status within a period of weeks.

The launch ends the long-lasting preparations for this mission that were initiated in April with the turnaround of the PSLV launch pad at the SDSC followed by the start of the build-up of the four-stage rocket.

Friday’s lift-off is the ninth flight of the PSLV in ‘XL’ configuration. ‘XL’ is the updated version of the PSLV in its standard configuration boosted by more powerful stretched strap-on boosters. The vehicle, weighing 320 tons at lift-off, uses larger strap-on motors to achieve higher payload capability.

The launch vehicle delivered into orbit the third generation of the Disaster Monitoring Constellation (DMC3) consisting of three identical satellites, each with a height of about 9.8 ft. (3 m) and weighing 985 lbs. (447 kg). They were launched into a 647 km Sun-Synchronous Orbit (SSO) and, thanks to the high spatial resolution and a separation of 120 degrees between them, these satellites can image any target on the Earth’s surface every day. They will mainly be used for surveying the resources on Earth and its environment, managing urban infrastructure, and for disaster monitoring purposes. The constellation has a 7-year lifespan. The June 10, 2015, launch marked the heaviest commercial payload that the ISRO has made to date. Photo Credit: ISRO

SSTL built the DMC satellites using its SSTL-300S1 platform equipped with advanced avionics and optical systems that make it possible to produce several different types of images such as mapping terrain, strip imaging, and mosaic imaging for vast areas.

In addition to commercial activity, the DMC works actively within the International Charter ‘Space and Major Disasters’ to provide free satellite imagery for humanitarian use in the event of major international disasters such as tsunamis, hurricanes, fires, and flooding.

The first generation DMCs (four in total) were launched between 2002 and 2003 to create the first constellation designed to deliver daily repeat high-resolution imaging. The second generation DMCs (another four) were placed into orbit between 2005 and 2011, and the latter three are still operating. They are expected to continue operations until at least 2018.

The CBNT-1 microsatellite, weighing 200 lbs. (91 kg), is designed to test some technical Earth observation capabilities as well as new processing and rapid-build techniques. No further information on the spacecraft has been released. The CBNT name comes from an internal SSTL acronym that has not been publicly disclosed. Integration of one of the DMC3 satellites. Photo Credit: ISRO

The smallest of the five PSLV-C28 passengers is the De-orbitSail nanosatellite, weighing just 15 lbs. (7 kg). Built by Surrey Space Centre at the University of Surrey, the satellite is designed for the demonstration of a large, thin membrane sail and drag deorbiting. The technology demonstrator uses a 3-Unit CubeSat to deploy a large five-by-five-meter ultra-thin sail to increase the drag acting on the spacecraft, resulting in quicker orbital decay. A full mission success will be declared if orbital data shows the expected rapid decay of the satellite, leading up to its destructive re-entry.

The satellites were launched on Friday as part of the arrangement entered into between DMC International Imaging (DMCii ), a wholly-owned subsidiary of SSTL and Antrix Corporation Limited (Antrix ), and the commercial arm of ISRO, a Government of India Company under Department of Space.

Today’s lift-off is the 30th for the PSLV rocket and the second ISRO mission this year. So far, 27 PSLV’s have been successfully launched, all reaching their planned orbits. All launches took place from the SDSC. Previously, the PSLV delivered the IRNSS-1D navigational satellite into orbit on Mar. 28, 2015.

ISRO launched the highest number of foreign satellites in April 2008 when the PSLV-C9 mission blasted off eight satellites from various countries including Canada, Japan, the Netherlands, Denmark, and Germany. However, the total weight of these eight satellites was only 107 lbs. (48.5 kg).

India’s next launch is planned for August, with a GSLV rocket deploying the GSAT-6 military communications satellite.

India,in a few weeks’ time is set to test a model of a space shuttle,RLV-Reusable Launch Vehicle as it is called by ISRO.

Once operational,the vehicle will reduce the cost of orbiting a satellite by a factor of 10,from $500/kg to $50/kg.

As a person of Indian origin in Canada,it gives me enormous pleasure to see India making very successful strides in space technology.