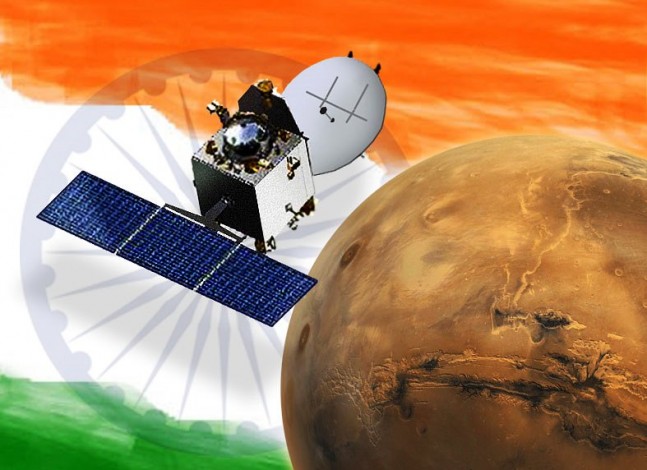 The probe and wider mission, while containing scientific elements, are mostly designed as a proof of concept (like navigation and deep space communication) and interplanetary debut for the Indian space agency. Of particular importance is that many of the mission’s components are homegrown.

The rocket upon which the payload was lofted into space was the Indian-made Polar Satellite Launch Vehicle (PSLV). The rocket has proven a reliable domestic alternative to a previously Russian dominated market, successfully completing twenty-six consecutive launches after a first (and only) failure in 1993. The PSLV has even gathered some traction in the international market, launching forty satellites on foreign contracts since its inception. ISRO offers the following specifications for this vehicle: “PSLV is capable of launching 3,527 lbs (1,600 kg) satellites in 385 mile (620 km) Sun-synchronous polar orbit and 1050 kg satellite in geo-synchronous transfer orbit. In the standard configuration, it measures 146 foot (44.4 m) tall, with a lift off weight of 295 tonnes. PSLV has four stages using solid and liquid propulsion systems alternately. The first stage is one of the largest solid propellant boosters in the world and carries 139 tonnes of propellant. A cluster of six strap-ons attached to the first stage motor, four of which are ignited on the ground and two are air-lit.”

The PSLV brought the Mars Orbiter Mission probe into an elliptic parking orbit on its launch in November 2013, where it spent about a month making a series of altitude jumps. This eventually helped spur the spacecraft into its heliocentric phase. During this element, the probe was slingshot around the sun to intercept Mars. Now put into elliptical orbit around the red planet, the Mars Orbiter Mission probe will be tasked, among other observational data collection jobs, with identifying the source of methane previously recorded in Mars’ atmosphere.

Instruments onboard the probe include those for studying the atmosphere, the particle environment, and the surface. The Lyman Alpha Photometer (which measures the planet’s loss of water) and the Methane Sensor for Mars are both atmospheric instruments. The Mars Exospheric Neutral Composition Analyser (MENCA), used for particle analysis, is a mass spectrometer. And the Mass Color Camera (MCC) and the Thermal Infrared Imaging Spectrometer (TIS) will both serve surface observation roles. The successful insertion of the probe into Mars orbit comes two years after then-Prime Minister Manmohan Singh announced the mission in the summer of 2012. The interplanetary satellite places the ISRO in the company of NASA, the European Space Agency, and the Russian Federal Space Agency as the only others to reach Mars. In the context of the hotly contested Indian-Chinese space race, the ISRO’s accomplishment, even if largely an illustration of technical capacity, is another significant ramification of this achievement. In fact, the Indian decision to pursue a Mars mission was made only months after a Chinese Mars probe failed to reach Earth orbit in 2011. The Mars Orbiter Mission is planned to last around six to ten months.

NASA administrator, Charlie Bolden made the following statement following the news of India’s successful orbital insertion, “We congratulate the Indian Space Research Organization for its successful arrival at Mars with the Mars Orbiter Mission. It was an impressive engineering feat, and we welcome India to the family of nations studying another facet of the Red Planet. We look forward to MOM adding to the knowledge the international community is gathering with other spacecraft at Mars.”

congrats everybody for this grand succes.

its very fentastice scince todays in india its great scess

I am Very proud to be an Indian. Hats off to our scientists.

I am Very proud to be an Indian. Hats off to our scientists. Every child should be inspired to become a scientist by this historic event.

I am proud of INDIAN scientists who achieved the great historic success in mars mission.I am proud to be an INDIAN…!

I am very proud of an INDIA great scientists hats off

we all proud to be Indian now .

wow i am very happy.

we are proud in our india. we hope isro will do many more things

congrats everybody for this grand succes. congratulations to INDIAN scientists and it is very great moment to INDIA. I am very happy.

REALLY I AM VERY PROUD TO BE AN INDIAN . I HOPE INDIAN SCIENTISTS WILL CREATE NEW RECORDS & MAKE OUR INDIA TO BE PROUD GOOD LUCK