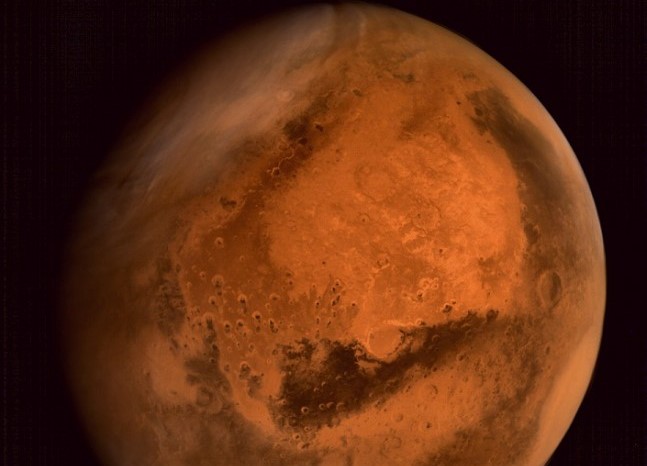 The Martian north polar region is to the upper left of the image, and if you look closely, you can see a dust storm brewing. Luckily, the rovers Opportunity and Curiosity are not in the vicinity of that storm. Also visible in the image is the south polar ice caps, and just to the right above center is one of Mars’ oldest terrains, Arabia Terra. This roughly 2,800-mile patch is heavily eroded and blanketed in craters.

Right below the Arabia Terra is a long dark region called the Terra Meridiani. Opportunity is roaming around this area, analyzing rocks. Scientists have found evidence that this region was once under water.

Having an image like this of Mars really puts into perspective the fact that we are looking at the entire face of another planet. This type of image cannot be produced by rovers on the surface. In the upper left of the image, the terminator line is present. This line, also known as the day-night line, divides the planet and is one that astronauts on board the space station are quite accustomed to seeing. MOM arrived at Mars late on Sept. 23, 2014, a mere three days after NASA’s Mars Atmosphere and Volatile EvolutioN (MAVEN) satellite arrived and inserted itself into orbit around the flash-frozen planet. MOM is currently in a highly elliptical orbit with an inclination of 150 degrees.

The $73 million mission was only expected to last at least six months, but it may be extended to a full year by the Indian space agency.

During its mission, MOM’s main objective is to analyze the Martian atmosphere and surface environments by utilizing its five built-in science instruments. Additionally, the orbiter will also be on the lookout for any potential signs of methane – one of the precursor’s for life.

around the budget of 2 India made movies this craft is doing really superb.