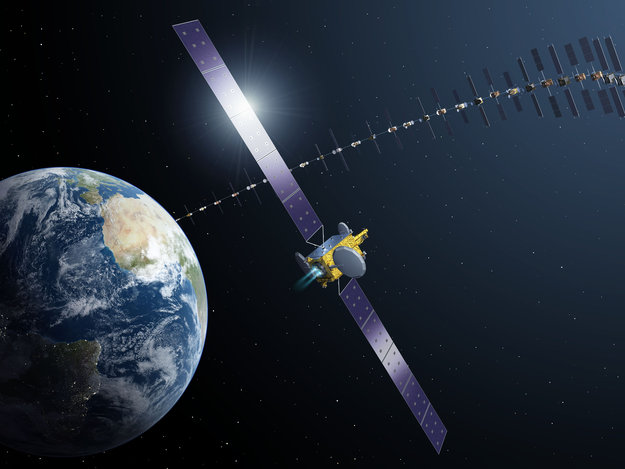 ESA has signed an agreement with SES of Luxembourg to produce a satellite with electric propulsion. Image Credit: ESA

The European Space Agency or “ESA” has begun work on developing satellites that maneuver using electric thrusters. The space agency signed an agreement with SES of Luxembourg to produce the next phase of what is known as the Electra project.

“Electra” is a partnership that has been forged between ESA and SES to help develop electric-only propulsion systems for geostationary telecommunication satellites. It is hoped that the first of these next-generation spacecraft will be launched by the end of 2018.

Electra is the first partnership under ESA’s ARTES-33 program. Similar in some ways to NASA’s current efforts with commercial cargo and commercial crew, ARTES-33 is focused on innovations from the private sector. However, these ideas must be proven via use of heritage hardware as well as on-orbit testing.

ARTES-33 operates through partnerships with companies as well as the client who test out the viability of designs and the market for those designs.

It is hoped that this program will help provide smaller geostationary satellites for potential customers.

“We are adapting our tools to best support the competitiveness of our satellite telecommunication industry,” said Magali Vaissiere, ESA’s Director of Telecommunication and Integrated Applications. “Electra is the first example of our Partner program, where we are consolidating the model of partnerships with the private sector to help the introduction and adoption of innovative efficient solutions proposed by our industry. It has been estimated electric-only propulsion reduces launch mass by as much as 40 percent. This design would be used to raise the satellite’s orbit as well as to conduct station-keeping maneuvers. According to a statement issued by ESA:

“This allows payloads to be twice as large or the use of smaller launch vehicles. Either way, it is economically attractive.”

SES has partnered with German satellite builder OHB Systems to develop Electra. OHB Systems hopes this will allow them to grow their portfolio of offerings to include telecom satellite platforms.

“Electra is a good example of the kind of cooperation we are seeking with ESA in the area of telecommunications. It maximizes the outcome for German industry in terms of potential commercial exploitation,” said Rolf Densing, Director of ESA Space Programs. “At the same time, Electra imposes a rigorous framework on all the parties involved, derived from the high commercial stakes. With Electra we continue our strategy to establish a prime for small telecommunication satellites in Germany.”

Electra is not just a development program; it is also the flight of the actual mission, as determined by the operator of the spacecraft. The statement issued by ESA states that the mission will be selected at the end of this Phase-B1 in 2014.

“Electra represents three partnerships in one: between SES and OHB, to develop the best solution for SES and the future needs of other satellite operators; between SES and ESA, to offer the best possible validation in orbit of a new technology; and between ESA and DLR to capitalize on previous investments,” said Jean-Jacques Dordain, ESA’s Director General, during the contract signing at SES in Luxembourg. “These three partnerships is the best way to optimize the use of public and private funds for enhancing the competitiveness of the European sector.”