Rosetta’s Philae: The sound of a touchdown 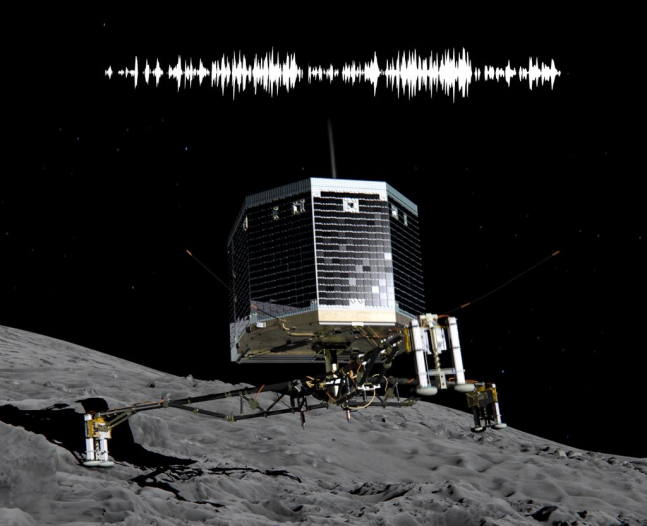 If a robot lands on a comet and no one is around, does it make a sound? Image Credit: ESA

We are not talking about football here, but rather the sound of everyone’s favorite little robotic probe landing on a comet. The European Space Agency’s (ESA ) plucky little lander, Philae, won the world’s heart last week as it made the first ever landing on the surface of Comet 67P / Churyumov-Gerasimenko (more commonly known as 67P). On Nov. 12, Philae set its feet on the surface of an icy world, making a small “thud“. With the help of its Cometary Acoustic Surface Sounding Experiment (CASSE), we are actually able to hear the lander touching down, and discover new details about the comet.

After Philae’s initial touchdown, the washing machine-sized robotic probe bounced twice, ultimately ending up in a shadowy region. The lander was equipped with several devices in order to help anchor itself to the comet, including harpoons and foot screws. Unfortunately, none of these methods worked, leaving Philae to rely solely on gravity to remain attached to the comet.

The CASSE instrument was switched on during Philae’s seven-hour descent, and recorded the first of Philae’s three landings. With the help of special sensors in Philae’s feet, the mechanical vibrations were captured and can be heard below.

Klaus Seidensticker from the DLR Institute of Planetary Research had this to say about the landing, “Our data record the first touchdown and show that Philae’s feet first penetrated a soft surface layer – possibly a dust layer – several centimeters thick until they hit a hard surface – probably a sintered ice-dust layer – a few milliseconds later.”

Seidensticker is the lead investigator on Philae’s Surface Electric Sounding and Acoustic Monitoring Experiment (SESAME), a suite of three science instruments including CASSE, DIM, and PP. While CASSE was busy recording data from Philae’s feet as it sat in its final resting place, the MUlti PUrpose Sensor (MUPUS), drilled into the surface of the comet. We now know that drill sample unfortunately did not contain any actual comet. However analysis of the MUPUS and CASSE data show researchers that there is no dust particles in the area, meaning the comet’s activity is low. The data also revealed that Philae is currently sitting in a region with subsurface water ice.

Seidensticker stated the team is continuing the search to Philae’s current location. “At the moment, we are also supporting the effort to reconstruct the flight path of the lander after first touchdown, collecting all available data across the various instruments. This is important for SESAME, especially CASSE, as we need to know the speed, impact angle, and rotation rate before the first touchdown, but also the final landing place” he stated.

Philae is now in hibernation as its final resting spot does not include a lot of sunlight to recharge the solar panels. However, researchers remain hopeful that as the comet moves closer to the Sun, Philae will be able to turn on again. One of Philae’s last duties was to complete a 35 degree turn, ensuring its largest solar panel was pointed  at the Sun. Philae’s partner, the Rosetta spacecraft, will continue to orbit the comet and collect data through next year.

Hear the comets ambient EM emissions which have been turned into a sleep sound: https://www.youtube.com/watch?v=HA_J_3xyt8g