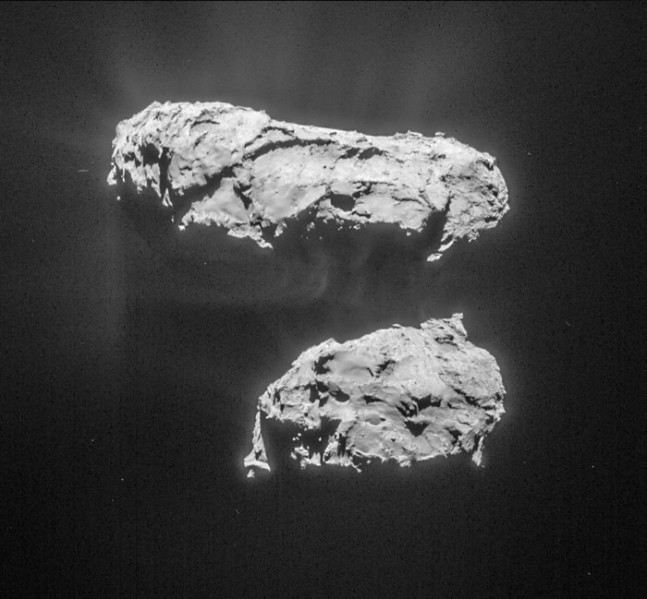 The European Space Agency’s (ESA) Rosetta spacecraft is a mission of firsts – first to rendezvous with a comet, first to land on a comet, and now first to detect molecular nitrogen on a comet. The latest data collected at Comet 67P/Churyumov-Gerasimenko is providing clues about the temperature environment in which it formed.

Rosetta arrived at Comet 67P last August, and has been steadily collecting as much data on the comet as it can, thanks to the panel of 11 science instruments on board.

The nitrogen was detected in a series of 138 measurements the spacecraft recorded with its Rosetta Orbiter Spectrometer for Ion and Neutral Analysis instrument (ROSINA) between Oct. 17-23, 2014, and at a distance of only 6 miles (10 km) above the comet’s surface.

“Identifying molecular nitrogen places important constraints on the conditions in which the comet formed, because it requires very low temperatures to become trapped in ice,” says Martin Rubin of the University of Bern, lead author of the paper presenting the results published today in the journal Science. Rosetta has made the first detection of molecular nitrogen at a comet. The results provide clues about the temperature environment in which Comet 67P formed. Image Credit: ESA

The discovery of molecular nitrogen is key as it’s thought to have been the most common type of nitrogen present when the Solar System was forming. In the colder outer regions, it was likely the main source of nitrogen that was incorporated into the gas planets.

Molecular nitrogen is found throughout the outer Solar System as it dominates the dense atmosphere of Saturn’s moon, Titan, and has been detected in the atmospheres and surface ices on Pluto and on Neptune’s moon, Triton. Comet 67P is predicted to have formed in the outer region of the Solar System and this new data helps to support that theory.

According to ESA, The trapping of molecular nitrogen in ice in the protosolar nebula is thought to take place at temperatures similar to those required to trap carbon monoxide. So in order to put constraints on comet formation models, the scientists compared the ratio of molecular nitrogen to carbon monoxide measured at the comet to that of the protosolar nebula, as calculated from the measured nitrogen to carbon ratio in Jupiter and the solar wind.

That ratio of nitrogen to carbon monoxide is approximately 25 times less for Comet 67P than the predicted protostar value. Scientists think the reason for this may be due to the ice forming at extremely low temperatures within the protosolar nebula.