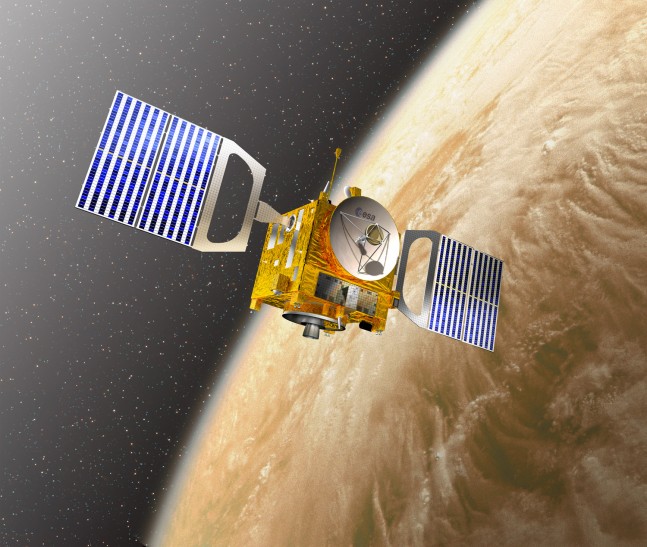 Artist Impression of Venus Express in orbit over the closest planet to Earth. Photo Credit: ESA

For one space probe, it was a hell of a ride to our “sister planet”, Venus. Eight long years of studying the inhospitable world was significantly more than ESA scientists expected from the mission. The Venus Express spacecraft launched on Nov. 9, 2005 and entered the orbit of its target planet on Apr. 11, 2006, was originally planned to last for only 500 days. Due to the mission’s success, three mission extensions were granted before the probe was subject to a slow death while entering Venusian hostile atmosphere this January.

“Venus Express fulfilled its original overall goals, gathered most expected data, and in fact could accomplish its objectives beyond what was originally thought by exceeding its nominal mission several times,” Patrick Martin, ESA Venus Express mission manager told astrowatch.net. “It did much more than what it was planned for thanks to both a very robust spacecraft and very professional operations teams.”

Venus, one of the solar system’s most inhospitable planets is a hellish place of high temperatures and crushing air pressure. The planet’s surface temperature of more than 842 degrees Fahrenheit (450 degrees Celsius), is hot enough to melt lead and its atmospheric pressure is some 92 times greater than Earth’s. These conditions caused earlier probes to only last little more than two hours. But even though the conditions on the surface of Venus are extremely inhospitable today, it may once have had a lot of water in the atmosphere, which is now mostly gone. The world might have even had oceans of water like Earth’s.

“Venus evolution towards a kind of inferno for life is still not fully understood. How a planet so similar to the Earth in many areas, with relatively similar distance to the Sun has become such an inhospitable planet?” said Håkan Svedhem, ESA Venus Express project scientist. “This is the kind of science that Venus Express has been doing and we have been happy to have learned about our neighbor planet and uncovered some of its mysteries.”

“This mission was a challenge for the main teams involved: the scientific, the planning and the operations teams, especially in what concerns the thermal constraints often brought close to its limits putting a continuous pressure over the teams and the spacecraft,” Svedhem added. Venus Express has discovered that Venus was geologically active more recently in its past – than was previously believed. Image Credit: ESA

Since its arrival at Venus in 2006, Venus Express had been on an elliptical 24‑hour orbit, traveling 41,010 miles (66,000 km) above the south pole at its furthest point and to within 124 miles (200 km) over the north pole on its closest approach, conducting a detailed study of the planet and its atmosphere.

“For over 8 years in Venus orbit, Venus Express carried out a detailed study of the planet and its atmosphere with a very comprehensive set of instruments. The spacecraft and payload provided major results on the atmosphere and ionosphere, with also important conclusions about its surface,” Martin said. “It found the planet may still be geologically active, with lava flows likely created no more than 2.5 million years ago and possibly even younger. Amounts of hydrogen and deuterium in the atmosphere suggested that Venus once had a lot of water in its atmosphere.”

Martin revealed that the most surprising discovery for him is the “super-rotating” atmosphere of Venus: “Other findings indicated that the planet continues to lose parts of its upper atmosphere to space, and that the ‘super-rotating’ atmosphere has seen wind speeds increasing from 186 to 248 miles per hour (300 to 400 km/h) over the last six Earth years.”

Immediately after arriving at Venus in 2006, the spacecraft recorded a significant increase in the average density of sulphur dioxide in the upper atmosphere, followed by a sharp decrease. One possibility is that the dramatic swing in atmospheric composition was caused by buoyant plumes of volcanic gases released by a large eruption and floating upward. This is one of the major discoveries made by Venus Express.

“This long mission around Venus has permitted not only a unique invaluable collection of scientific data but also long-term statistics about the planet’s behavior and evolution,” Svedhem said.

A Cherry on the Cake After eight years in orbit and with propellant for its propulsion system running low, Venus Express was tasked in mid-2014 with a daring aerobraking campaign, during which it dipped progressively lower into the atmosphere on its closest approaches to the planet.

“This mission was essentially run flawlessly throughout its lifetime, and the only thing serious that happened to it was the lack of propellant to complete the raising of the orbit in November 2014, which led to the end of mission operations,” Martin said. “With just a little more fuel, the mission could obviously have gone further in 2015, but having been able to perform the aerobraking last Summer was really the ‘cherry on the cake’ for this mission.”

Svedhem admits that at a certain point and after doing some aerodrag experiments, the mission team was confronted with the possibility to do aerobraking operations to lower the orbit apocenter and thus reduce the effect of the Sun which required frequent, highly consuming propellant maneuvers. It was finally decided to leave it as an experiment towards the end of the mission since the spacecraft was not fully designed to withstand the high temperatures caused by the friction with the atmosphere.

“The opportunity came finally in 2014 when the propellant estimation was predicting the end of its life. The aerobraking experiment provided not only a unique opportunity to explore the unknown atmosphere and altitude around 80 miles (130 km) but a European premiere to do aerobraking at a planet different from Earth,” Svedhem said.

Venus Express aerobraking operations were successfully executed from June 18 to July 11, 2014. After some internal discussions, the mission team and the ESA management had to make the choice between leaving the spacecraft go into the atmosphere or make a last maneuver attempt to raise the percenter with the propellant left and get a final bonus of science towards the end of 2014.

The spacecraft ran out of propellant and went to safe mode on Nov. 27. From that moment, it managed to get enough energy from the Sun to show that it was alive by sending a signal that has been detected by ESA and NASA ground stations. The last signal was detected on 18 January 2015. “We believe that the spacecraft is just about to enter into the atmosphere like a hero, holding its last breath down through its final atmosphere crossing,” Svedhem remarked. Venus in the Spotlight

The analysis of the data collected will continue being subject of study for the scientific community and will remain a reference for planetary science for many years to come.

ESA scientists underline that Venus Express has not only been a successful scientific mission but has permitted the operations teams to develop innovative processes looking at the future. “As an example it is worth mentioning the full operations automation for the last two years of the mission, the provision of almost real time web data analysis tools for anomaly investigation or its efficient planning concepts being partially re-used for the Rosetta mission,” Svedhem said.

There may most likely be Venus-related mission proposals for the ESA’s M4 selection this year, which is the next medium-size mission to be selected. “However, there is no guarantee that Venus will get the winning ticket!” Martin said.