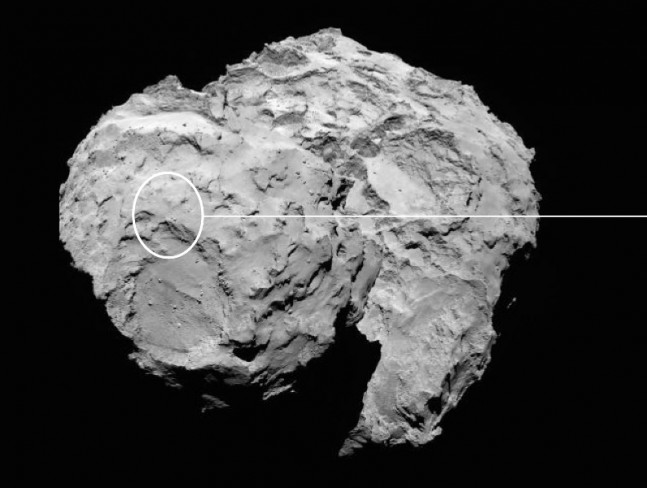 PARIS, France — On August 27, we reported that the European Space Agency (ESA) narrowed down Philae’s potential landing sites to five locations. This morning, ESA announced the primary landing site as well as one backup site during a press conference. On November 11, the lander is scheduled to make history by being the first spacecraft to touch down on a comet’s surface. The five potential landing sites for Rosetta’s Philae lander have been narrowed down. Image Credit: NASA

Although none of the candidate sites fit the ideal criteria 100 percent, site ‘J’ proved to be an intriguing region on the head of comet 67P/Churyumov–Gerasimenko. Full of science potential, and minimal risks to the lander, the voting for site ‘J’ was unanimous. The backup site, site ‘C’, is located on the body of the comet.

Jean-Pierre Bibring, a lead lander scientist and principal investigator of the CIVA instrument at the IAS in Orsay, France said,”Site J in particular offers us the chance to analyze pristine material, characterize the properties of the nucleus, and study the processes that drive its activity. None of the candidate landing sites met all of the operational criteria at the 100% level, but Site J is clearly the best solution.”

Bibring went on to say, “We will make the first ever in situ analysis of a comet at this site, giving us an unparalleled insight into the composition, structure and evolution of a comet.”

Comet 67P has proven to be an interesting world, spanning roughly 2.5 miles (4 kilometers) at its widest point, and choosing a landing site has not been an easy task.

“As we have seen from recent close-up images, the comet is a beautiful but dramatic world – it is scientifically exciting, but its shape makes it operationally challenging,” says Stephan Ulamec, Philae Lander Manager at the DLR German Aerospace Center.

The hunt for the ideal landing site kicked off on August 6, as soon as Rosetta reached the comet and scientists were able to it for up-close for the first time. Subsequent data collected allowed scientists to narrow down the choices and ultimately to create a unique map of the comet’s surface.

After Rosetta reached a distance of 18 miles (30 kilometers), more detailed data and images were produced. The data allowed the flight dynamics and operations teams to explore all five sites and plan how they would land on each. This past weekend, the Landing Site Selection Group assembled and everyone agreed site ‘J’ was the best choice. Many crucial aspects were taken into consideration during the selection process. Primarily, there needed to be a target with a safe trajectory to deploy Philae to the surface and the landing zone had to contain minimal visible hazards. After Philae touches down, other factors come into play, such as the balance of day and night hours, and the frequency of communications passes with Rosetta.

For each candidate site, less than one square mile was assessed and site J contained relatively few boulders, had sufficient illumination necessary for recharging Philae, and had the ideal terrain for reducing the chance that Philae would topple over touchdown. Descent is expected to take seven hours and is not expected to deplete Philae’s batteries too much. Sites B and C were both considered as backup sites, but C showed fewer boulders and more illumination. Sites A and I were dismissed during the second round of discussions as they failed to meet key criteria.

The team can now draft an operational timeline and plan out Rosetta’s precise approach trajectory. The team must work quickly as the landing has to take place before mid-November. The closer comet 67P gets to the Sun, the more active it becomes and the more dangerous that will be for Philae.

“There’s no time to lose, but now that we’re closer to the comet, continued science and mapping operations will help us improve the analysis of the primary and backup landing sites,” says ESA Rosetta flight director Andrea Accomazzo.

He went on to say, “Of course, we cannot predict the activity of the comet between now and landing, and on landing day itself. A sudden increase in activity could affect the position of Rosetta in its orbit at the moment of deployment and in turn the exact location where Philae will land, and that’s what makes this a risky operation.”

Philae’s descent to the comet’s surface will be fully autonomous, and the Lander Control Center at DLR will prepare commands and upload them via Rosetta mission control prior to separation. Images and other data pertaining to the comet’s environment will be collected during descent. Context image of Comet 67P/Churyumov–Gerasimenko with the original five candidate landing sites for Rosetta’s lander Philae, and with the backup, Site C, indicated. The regions are marked on OSIRIS narrow-angle camera images taken on 16 August from a distance of about 100 km. The comet nucleus is about 4 km across. Image Credit: ESA

Once touchdown occurs, Philae will use harpoons and ice screws to anchor itself to the surface. Next, it will take a 360° panoramic image of the landing site to determine in what orientation it landed before beginning its initial science phase. During this initial phase, Philae will use its panel of scientific instruments to observe and analyze surface and subsurface temperatures, as well as the plasma and magnetic environment. The comet’s interior will be mapped by sending radio waves through the surface. With the help of Philae’s on board laboratory, surface and subsurface samples will be collected and analyzed.

Fred Jansen, ESA Rosetta mission manager stated, “No one has ever attempted to land on a comet before, so it is a real challenge. The complicated ‘double’ structure of the comet has had a considerable impact on the overall risks related to landing, but they are risks worth taking to have the chance of making the first ever soft landing on a comet.”

On September 26, we should expect to see a confirmed landing date and a final Go/No Go for landing will occur after a comprehensive readiness review on October 14.