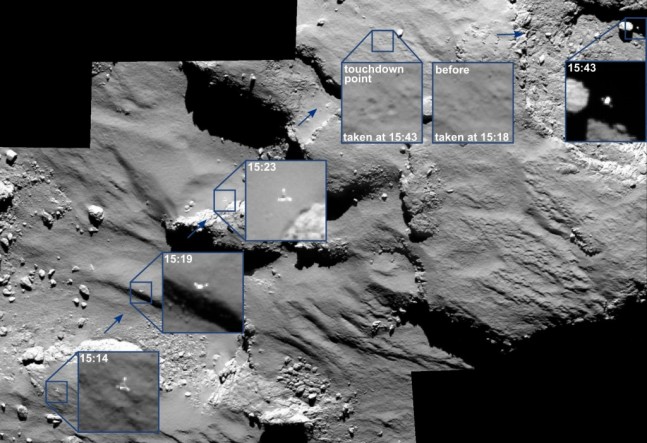 The European Space Agency (ESA ) led a mission that landed on a comet last week. After receiving the initial landing confirmation signal, further analysis showed Philae bounced twice across the surface of Comet 67p/Churyumov-Gerasimenko (comet 67P for short). Philae’s final resting place is not currently known, but after analyzing data from Rosetta’s OSIRIS camera, its first touchdown has been discovered. The team is hoping this discovery will help them uncover the little lander’s current location.

OSIRIS image showing where Philae first touched down on the surface of comet 67P. Left image is before touchdown, and right image if after Philae bounced. Note the three distinct foot prints. Image Credit: ESA

Philae, equipped with one primary and one backup battery, was fitted with six solar panels capable of recharging those batteries. Since Philae’s harpoons and foot screws, designed to anchor the lander to the comet’s surface, did not function as expected, Philae bounced twice. As a result, it missed the targeted Agilkia landing zone — selected for its high illumination — and ended up in the shadows.

In a last ditch effort to hopefully revive the plucky little lander at a later date, the team rotated Philae 35 degrees before it went into hibernation. This move ensured its largest solar panel would be exposed to the minimal light that area receives. No one expects Philae to wake up anytime soon, however, given enough time, it’s possible.

Despite being operational for under 60 hours, Philae worked diligently, making use of all 10 of its science instruments. The COmetary Sampling And Composition (COSAC) instrument is one of two gas analyzers aboard Philae, and is designed to “sniff” out organic molecules.

Material from the comet’s surface are collected, combusted and the resulting gas is analyzed by COSAC. Researchers hope to determine if comets did in fact bring organic material to Earth. After analyzing COSAC data, it was determined that Philae detected organic molecules on the comet. The DLR German Aerospace Center, responsible for the construction of the COSAC instrument stated, “Cosac was able to ‘sniff’ the atmosphere and detect the first organic molecules after landing. Analysis of the spectra and the identification of the molecules are continuing.”

In fact a few months ago, the Rosetta orbiter detected organic molecules on the comet. Both methane and methanol are organic molecules and are present on the comet. Neither are important in the hunt for Earth’s origins. As data is analyzed further and more information is released, we will wait to hear more specifics on the types of molecules detected. Philae’s MUlti PUrpose Sensor (MUPUS) tells us that Philae has landed in an icy region covered by dust. Part of MUPUS was located in the harpoons, so its data has been limited, but what it can tell us is from its thermal mapper, located on the lander’s body. The surface of the comet appears to be covered in a layer of dust approximately 3-8 inches (10-20 cm).

This dusty layer covers an extremely hard water ice subsurface — some areas could be as hard as sandstone. Once the MUPUS hammer was deployed, it recorded a significant temperature drop within the first 30 minutes. This indicates to researchers that the comet harbors ice. Tilamn Spohn, principal investigator for MUPUS stated, “If we compare the data with laboratory measurements, we think that the probe encountered a hard surface with strength comparable to that of solid ice.”

As the comet continues its journey towards the Sun, scientists will remain hopeful that Philae will be able to collect enough solar energy to power up again. In the meantime, the Rosetta spacecraft will continue to orbit the comet, and collect data.

I also love this ambient sleep sound made with the comet’s EM emissions: https://www.youtube.com/watch?v=HA_J_3xyt8g&list=UUF6R1ZDskjCeBMomUGCtxXw