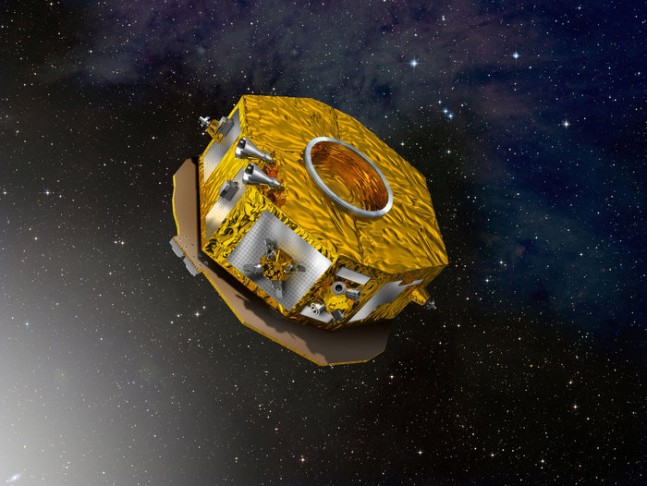 If LISA could smile it would probably have a cheerful one, much like Mona Lisa in the famous Leonardo da Vinci painting. The Laser Interferometer Space Antenna (LISA )Pathfinder mission is currently on track for a planned July 2015 launch. The spacecraft is being prepared for its mission to test in flight the concept of low-frequency gravitational wave detection. It will put two test masses in a near-perfect gravitational free-fall, and control and measure their motion with unprecedented accuracy. ESA scientists review their handiwork after one of the tests on the LISA spacecraft. Photo Credit: Astrium UK / ESA

The European Space Agency (ESA ) reports that the spacecraft’s Science Module was retrofitted with three new side-panels onto which the cold-gas micro-propulsion equipment had been integrated. Functional verification of the spacecraft is progressing as planned, with the completed version of the flight software and using the FM microthrusters driving electronics.

Acceptance testing of the two FM Inertial Sensor Heads (ISH ) has been completed. The testing campaign included bi-polar discharge of the test mass by means of ultraviolet light, contacting, photoelectric effect. In orbit, though, the discharge process will be without physical contact between the test mass and its surrounding electrodes. LISA will be launched atop a Vega rocket from the Spaceport located in Kourou, French Guiana. Photo Credit: ESA

Thus, the ground verification requires novel modelling techniques. The ISH FMs will now be integrated on the LISA Pathfinder Core Assembly (LCA). The LCA includes an optical interferometry ultra-stable bench on its support frame, the two ISH, diagnostics equipment and support equipment. The LCA integration has advanced to the point where the next step is the integration of the ISH.

The spacecraft will be launched by one of ESA’s Vega rockets from the Kourou Space Center, located in French Guiana. The lessons learnt from the first Vega launches are being closely monitored to confirm the compatibility with the mission and spacecraft.

LISA Pathfinder will use its own propulsion module to reach its final operational orbit, a 310,686 mile by 497,097 mile (500,000 km by 800,000 km) halo orbit around the first Sun-Earth Lagrange point, at 1.5 million km from Earth. After the last transfer burn is performed, and the health of the science spacecraft is ascertained, the propulsion module will be jettisoned. The spacecraft’s operational phase will last six months. The mission itself could be extended to one year.

LISA Pathfinder is a pioneering mission. Not only are these technologies new, they cannot be properly verified on the ground. This is because the Earth’s gravity and environment would overwhelm the test results. Only in space can the subtle effects of the low frequency gravitational waves be detected with exquisitely precise instruments.

“LISA Pathfinder is far too small in scale to be able to detect gravitational waves itself, but it will prove the feasibility of the cutting-edge technology needed to make LISA a reality,” said Bengt Johlander, Payload Engineer for the LISA Pathfinder mission.