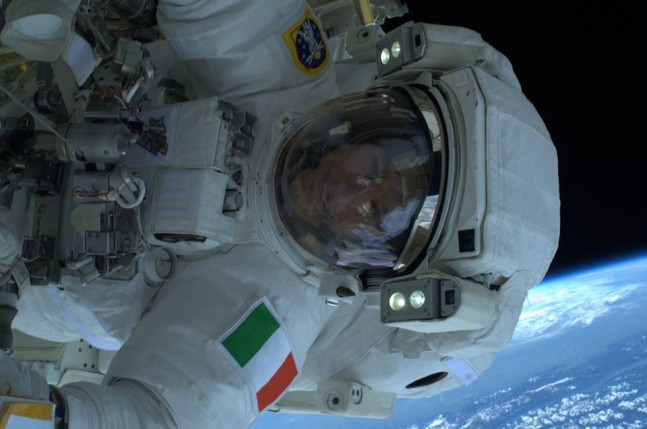 NASA has released the report on the extra-vehicular activity which nearly saw ESA astronaut Luca Parmintano drown in his spacesuit while conducting an EVA. Photo Credit: NASA

On February 26, the NASA board investigating the near-drowning of ESA astronaut Luca Parmitano on July 16, 2013 during an extravehicular activity (EVA) issued the public version of its mishap report. In a press conference, Board Chairman and International Space Station (ISS) Chief Engineer Christopher Hansen made the surprising revelation that the leak that prematurely ended the July 16 EVA had already made an appearance at the end of Parmitano’s prior EVA on July 9. Had the initial leak been properly investigated instead of being quickly attributed to a leaky drink bag, says the Investigation Board, the more serious leak on July 16 might never have occurred. The leaking drink bag view also delayed Parmitano’s return to ISS’s interior on July 16, decreasing his chances of survival. For the record, the drink bag had nothing to do with the water that filled Parmitano’s helmet that day. The cause was blocked drum holes in the water separator, although the source of the blockage remains the subject of ongoing investigation. Further surprises came to light when it turned out the true origin of the leak was obscured for some time by mistaken assumptions about fluid flow behavior in microgravity. It also appears that the ISS crew narrowly avoided an onboard fire when in post-EVA cleanup pure oxygen was accidentally vacuumed, bringing the highly flammable gas into contact with a potential ignition source.

Surprises in spaceflight operations are not good. Hansen’s Board expressed some significant concerns, highlighting schedule pressure, a sadly familiar accident contributing factor over NASA’s history, as being a major concern in this case and in general ISS operations. At today’s press conference, NASA Associate Administrator  for Human Exploration and Operation William Gerstenmaier indicated that all of the ISS support teams have been asked to review their purviews for risks that might have been overlooked in the quest to stay on schedule. Any planned EVAs have been suspended pending implementation of the top level recommendations from the Investigation Board, likely sometime late summer 2014, although it’s possible troubleshooting or contingency EVAs might take place before that time.

We are still reviewing the full contents of the report, as is much of the rest of the space world, and will post analysis as it becomes available. In the meantime, you can read the full report below with additional information from NASA here.

This article was written by Merryl Azriel for Space Safety Magazine – it can be viewed here: EVA Review