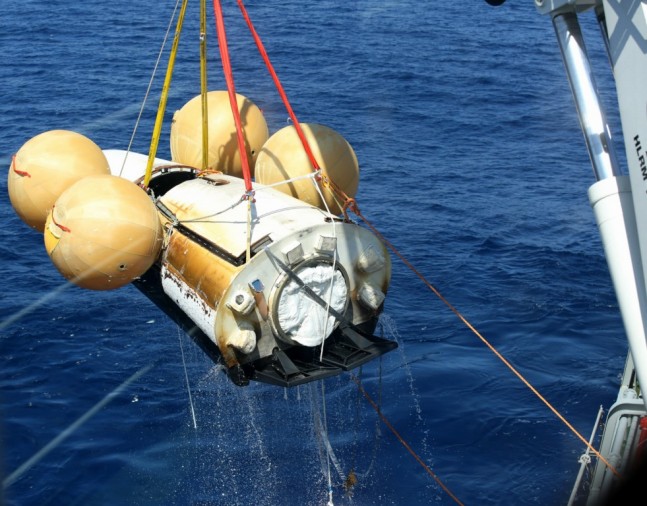 On Feb. 11, the European Space Agency’s (ESA) Intermediate eXperimental Vehicle (IXV), atmospheric reentry demonstrator, successfully completed its first test flight, ending with a splashdown in the Pacific Ocean. The spacecraft traveled to an altitude of approximately 250 miles and left one aerospace company in particular bursting with pride over the very successful test.

“The success of this mission is a source of great pride for us. Thanks to the data collected during the flight, we are paving the way for the development of new-generation reentry vehicles in Europe,” Sandrine Bielecki, Thales Alenia Space spokesperson told astrowatch.net.

Thales Alenia Space (TAS ), a French-Italian joint venture, was the prime contractor for the IXV mission, heading up a consortium of partners from European industry, research centers and academia. Italy’s participation in the project was strongly supported by the Italian Space Agency (ASI).

“Thales Alenia Space took the leadership of the project in Dec. of 2009. The IXV was delivered to ESA almost five years later in Sept. of 2014. Hundreds of engineers and technicians spread all across Europe worked to the project. Among those, about 120 TAS people were involved,” Bielecki revealed. “The industrial organization of IXV was quite complex. Thales Alenia Space managed a team of about 40 entities – industries, universities, research centers – of 10 countries: Italy, France, Switzerland, Spain, Belgium, Ireland, Portugal, Germany, the Netherlands, and USA. Italy is providing the largest share of funding.”

“With this mission, France and Europe confirm their excellence in space exploration, one of the major challenges facing us in the years ahead,” said Geneviève Fioraso, French Minister of Higher Education and Research.

The company is Europe’s largest satellite manufacturer and one of the main suppliers to the International Space Station (ISS). TAS built the Multi-Purpose Logistics Modules, which was used to transport cargo inside the Space Shuttle orbiters. They also built several modules for the ISS. Then, IXV began the reentry phase, during which critical data was acquired via the instruments on the vehicle. The IXV reached a speed during its atmospheric reentry of approximately 4.7 miles/sec (7.5 km/sec) at an altitude of 74 miles (120 km), typical of a reentry from low-Earth orbit (LEO), similar to those of the Space Shuttle.

“During Flight Phase, the IXV worked perfectly, as the ground segment did, implementing the whole flight program in line with the commanded maneuvers and trajectory prediction,” Bielecki said.

As it descended, the five-meter-long, two-ton craft maneuvered to decelerate from hypersonic to supersonic speed. The entry speed of 4.7 miles/sec (7.5 km/s) at an altitude of 74 miles (120 km) created the same conditions as those for a vehicle returning from LEO.

IXV glided through the atmosphere before parachutes deployed to slow the descent further for a safe splashdown in the Pacific Ocean.

Bielecki underlined the importance of the test flight and its uniqueness for Europe, “A huge effort was made and our company is now the European benchmark in this sector. It must be noted that a lifting body shape, like the one IXV features, was never flown by Europe,” she said. “Thales Alenia Space plans to further develop its expertise via the European program PRIDE, approved at the Ministerial Conference in December 2014, marking another significant step forward in the understanding the atmospheric re-entry phenomena and in developing critical technologies for reentry systems.“ The Intermediate eXperimental Vehicle (IXV) being removed from its protective container in a cleanroom at the ESA’s Technical Center. Photo Credit: ESA-Anneke Le Floc’h

Thales Alenia Space is working on an array of space exploration efforts. The company is also engaged in developing numerous probes that will study other planets in our solar system. The most significant is the next Martian spacecraft made in Europe – ExoMars. The mission, being built in partnership with Russia, is a major challenge for the French-Italian company.

“The ExoMars program is a great scientific challenge and Thales Alenia Space, with a synergistic role between the Turin and Cannes plants, is prime contractor of the Program, looking after the entire design of the two missions (2016 – 2018),” Bielecki noted. “At this time, in Thales Alenia Space Plant in Turin, technicians and engineers are integrating the EDM (Entry Descent Module) which, together with the TGO (Trace Gas Orbiter) orbiting module, currently undergoing integration at the Thales Alenia Space plant in Cannes, will make up the vehicle that will land on Mars during the 2016 mission.”

The company is participating in other ESA projects: Euclid, which will search for dark energy and dark matter exploration; Bepi Colombo, which will explore the planet Mercury; the Service Module of the Orion Crew Transportation System; and is also involved with the current operations on the International Space Station.