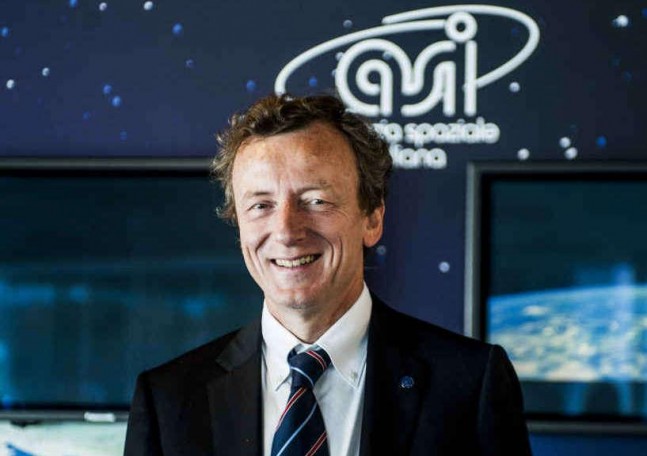 Italy, one of the key players of the European Space Agency (ESA ), is working to build up its role in human space flight endeavors, with an eye on further cooperation on the International Space Station. To date, the country has produced seven astronauts and is working to develop Europe’s next-generation launch vehicles and is actively taking part in ESA’s space exploration projects. In an interview with astrowatch.net, Italian Space Agency (ASI ) President Roberto Battiston talks about his presidency and Italy’s contribution to efforts to send crews beyond Earth’s gravitational influence.

Astrowatch.net / SpaceFlight Insider: Are you proud of Italian astronauts in space, especially the latest missions of Luca Parmitano and Samantha Cristoforetti? Roberto Battiston: “Of course, yes, we are very proud of our astronauts. Their missions provide great visibility to the Agency activities in space in addition to new science results exploiting the extraordinary resources on the ISS. Astronauts are role models for the young generation and Luca and Samantha have been particularly effective from this point of view. The fact that Samantha is the first Italian woman in space has raised tremendous interest in our society.”

Astrowatch.net / SpaceFlight Insider: How much presence does ASI have in space cooperation regarding International Space Station, or deep space missions like Cassini?

Battiston: “ASI is a key participant to the ISS, since our contribution is based both on direct agreements with NASA as well as on contributions provided as part of ESA participation to ISS. Nearly half of the habitable volume of the ISS has been built by the Italian industries in Turin. On Cassini, we have provided the 4-meter diameter radar – the crucial part of the telecommunication system – and the visible part of the imaging spectrometer VIMS [Visual and Infrared Mapping Spectrometer].  In addition, HASI [Huygens Atmospheric Structure Instrument], the payload which [had] landed on Titan, has provided very precious information about surface temperature and atmospheric pressure.

NASA’s Cassini has been orbiting Saturn since 2004

“These achievements demonstrate how much the Italian industries and scientific community are at the frontier in the field of space science and technologies.”

Astrowatch.net / SpaceFlight Insider: In what fields of space research do you think ASI should focus?

Battiston: “Space research encompasses a wide interval of topics, from the exploration of the edges of universe, where the law of physics can be tested in extreme conditions, to the accurate observation of the Earth as a complex, evolving system; from precision and reliable navigation to data communication at a continuously increasing rate, not forgetting the technological development – as [an] example, in the field of access to and reentry from space.

“Good science in space, as in other fields, is based on excellence, starting with the researchers and continuing with the research centers, universities and infrastructures as well as competitive industry. We cannot confine space research to predefined sectors and we must keep doors open to new ideas, having clear goals to be reached. What is instead of basic importance is to identify within the relevant, specific fields which are the key topics and projects for the forthcoming 10 years and ensure that they are supported creating the conditions that the best scientists, in particular the most promising youngest researchers, will work on it. This is quite challenging due to the duration of these projects.”

Astrowatch.net / SpaceFlight Insider: What are your plans as the ASI president?

Battiston: “To be a little bit more precise, areas where ASI will focus during my presidency will include the next generation of cosmic microwave background observers, the study of exoplanets, accurate tests of general relativity, high energy astrophysics, new generation of hyperspectral and SAR satellites for Earth observation, monitoring and mitigation of space debris, [and] evolution of access to space. Development of powerful data analysis capabilities and techniques will be a leitmotiv of this strategy, since most of future space missions will require it.”

Astrowatch.net / SpaceFlight Insider: Can you talk about what is the Italian contribution to ESA launchers like Ariane or Vega and to the IXV spaceplane? Battiston: “At the Luxembourg Ministerial Conference last December, Italy has made clear that [it] plans to play a major role in this field. The evolution of Vega into the more powerful Vega-C requires a more powerful motor – the P120 – which will be a commonality at the basis of the whole Ariane6/Vega-C family. This decision is key for the success of the CMIN-14 and will allow the ESA launchers to become really a family, improving the industrial competitiveness and reducing the costs. The competition with the emerging countries and, most important, with industrial models which are innovative,  like Space-X in US, is driving ESA and the European industry towards a more efficient, cost effective model where industries takes a larger role than in the past. Italy, together with France and Germany, is leading this process in ESA and within industry and the development Vega-C with a goal of a maiden launch already in 2018, is the center of this strategy.

“About the re-entry, the success of IXV keeps Italy on the frontier in this field: before a further big step, we would need a clear application goal, which can only be the result of a multinational strategy which we will help defining.” Roberto Battiston is the current President of the Italian Space Agency. Physicist of the National Institute of Nuclear Physics (INFN), Battiston was appointed ASI President by the Minister for Education, University and Research in May 2014.

Full Professor of Experimental Physics at the University of Trento, where he was born in 1956 and still lives, Battiston has had a long and distinguished academic and scientific career, full of international awards, which began immediately after graduating with honors in Physics from the Scuola Normale of Pisa in 1979.

He has worked for over 30 years in international collaborations in the field of experimental physics and fundamental interactions: strong interactions, electroweak interaction physics, search for antimatter and dark matter in cosmic rays. He is also the founder of a research group in Perugia working in the field of frontier detectors and technologies to be used in fundamental physics research – ground based and space based. In 1994 he founded SERMS (Laboratory for the Study of the Effects of the Radiation on Special Materials), devoted to the characterization of materials and devices to be used in space conditions.

He is also the Deputy spokesperson for the AMS experiment, the first fundamental physics experiment approved on the International Space Station, already successfully flown during the STS91 Shuttle flight in June 1998 and installed on the ISS in 2011.