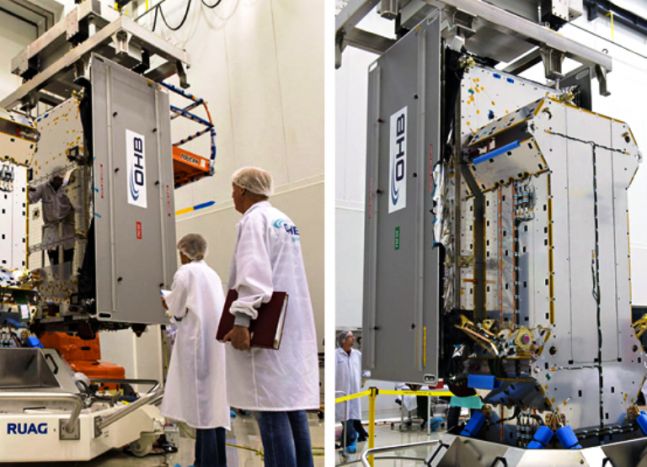 Separate fit check processes for the third and fourth Galileo Full Operational Capability (FOC) satellites are highlighted in the photos above. At left, the Flight Model #3 (FM3) spacecraft is moved for positioning on the payload dispenser; while Flight Model #4 (FM4) is shown after its own integration at right. Caption and Image Credit: Arianespace

The European Space Agency (ESA ) is preparing the third and fourth Galileo Full Operational Capability (FOC ) satellites for a planned March 27 launch atop a Soyuz-2 booster. The next two Galileo navigation spacecraft have recently undergone what is known as a “fit check” with the mission’s dual-payload dispenser in French Guiana. Once the full Galileo constellation is on orbit, some 30 satellites total, they will serve as the European equivalent of the U.S.’ GPS and Russia’s GLONASS systems.

This week, technicians conducted the fit check over the course of two days inside of the Spaceport’s S1A payload preparation building. Flight Model #3 (FM3) spacecraft was installed in the payload dispenser on Monday, Feb. 16. Flight Model #4 (FM4) went through the same procedure the following day, Tuesday, Feb. 17 Developed by RUAG Space, Sweden produced the dispenser on behalf of the Launch Service Provider, Arianespace. Utilizing a pyrotechnic separation system, the spacecraft will be deployed in opposite directions at the orbital insertion point.

The two spacecraft, safely integrated into the dispenser, will be mated with the Soyuz-2 launch vehicle at the Spaceport located in Kourou, French Guiana, in the coming days. FM3 and FM4 were constructed by OHB System, with Surrey Satellite Technology Ltd. providing their navigation payloads.

Designated Flight VS11, the flight will be the fourth conducted to test and develop the Galileo system. ESA encountered some difficulties during the Aug. 22, 2014 flight of the launch of the FM1 and FM2 satellites. The duo, dubbed Doresa and Milena, were placed in a lower-than-planned orbit.

The Galileo system will be considered operational during what has been described as the “Full Operational Capability” phase. While this is taking place, the ground infrastructure will also be established. Funded by the European Commission, the system’s design and procurement is managed by ESA.

The Galileo system was tested via the flights of the GIOVE-A and GIOVE-B satellites which were launched in 2005 and 2008, respectively. If the system becomes fully operational, it will mark a change from those that preceded it in that it will be the first civilian on-orbit navigational system that has been fielded. The FM3 and FM4 spacecraft are scheduled for launch on an Arianespace Soyuz booster on March 27. Photo Credit: NASA