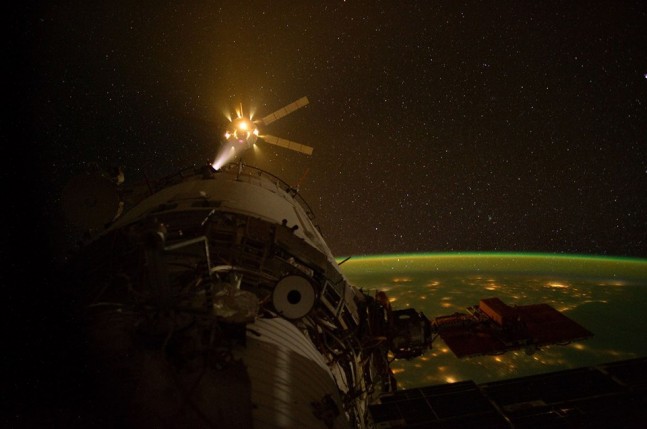 ATV-5 – the last of the European automated transfer vehicles is on the way back to Earth after an extended stay at the International Space Station (ISS). The departure occurred at 8:15 a.m. EST (12:15 GMT). The craft is designed to burn up when reentering the Earth’s atmosphere. Any remaining pieces will fall harmlessly into the Pacific Ocean. The ATV will be returning with several tons of trash and unused or broken equipment from the space station.

The ATV program was part of Europe’s contribution to the orbiting lab. The cargo craft were intended to be launched every 17 months with 8 tons of supplies. They are capable of remaining attached to the station for periods of up to six months. While attached, they mainly remain in a dormant mode, providing additional storage space to the crew. About every 10-15 days the ATV is powered up and used to boost the orbit of the ISS. When their mission is nearly complete, the ATV is filled with up to 6.5 tons of trash for the fiery reentry into Earth’s atmosphere.

Each of the ATVs was named after a European scientist or astronomer. ATV-1, launched in March 2008, was christened the Jules Verne. Subsequent ATVs were named Johannes Kepler, the Edoardo Amaldi, and Albert Einstein. This fifth and final ATV was named after Georges Lemaître, the 20th century Belgian astronomer and physicist. ESA’s ATV is known for the distinct x-wing arrangement of its solar panels. Photo Credit: ESA

Georges Lemaître, in addition to his science credentials was also a Jesuit priest. He is best known for being the first scientist to propose a theory regarding an expanding universe. He also made the first estimation of the Hubble constant and derived what is known as Hubble’s law.

On Apr. 2, 2012 the European Space Agency announced that the ATV program would be ending with the fifth launch. No further funding is available to continue producing the vehicles or provide for their launch and ESA has expressed more interest in deep space exploration efforts as opposed to low-Earth orbit operations.

ATV-5 is the heaviest spacecraft to ever launch atop an Ariane 5 rocket, and delivered 14,587 pounds (6617 kg) of supplies and experiments to the ISS.

Before docking, it flew under the Station to demonstrate new laser and infrared imaging technology that will help future spacecraft to rendezvous with uncontrolled objects. ESA astronaut Alexander Gerst and Russian cosmonaut Alexander Skvortsov oversaw the automated docking of ATV-5 last August and before unloading its cargo. Over the last six months, the crew have unpacked the cargo and, in turn, have loaded ATV-5 with used experiments and trash.

In October Georges Lemaître performed a task no other ATV vehicle had done before. ATV-5 was the first to push the Station out of the way of incoming space debris using a special maneuver. A feat the spacecraft repeated two weeks later.

Last month ATV-5 took the Station into a lower orbit, slowing their orbital speed after the outpost had turned around. This rare maneuver had not been performed since 2008, by the first ATV to dock to the station, and will allow other supply spacecraft to bring heavier cargo to the ISS.

ATV-5 was originally set to enter the atmosphere at the end of February in a new, shallow dive that would have allowed NASA and ESA teams to observe the spacecraft closely and gather data during its reentry. This information will prove valuable when the station itself is deorbited.

However, last week, one of the four power chains failed, leading it to switch automatically over to its ‘failsafe’ system. ATV is designed to continue its normal mission with one failure, and can still be controlled safely even with two.

ATV-5 was supposed to free fly for 13 days; however, due to an increased risk of a second failure before the Feb. 27 reentry, and the impossibility of shortening this phase because of heavy traffic at the station and other ATV operational constraints, ESA was forced to cancel the shallow reentry.

As a result, George Lemaître will follow the standard reentry profile around 30 hours after undocking, just like its predecessors. Leaving the Station: “And in the meantime @AstroTerry watched #ATV5 depart from the Russian docking compartment window.” Photo Credit: ESA/NASA

Two experiments are ready in ATV’s cargo hold: both will monitor the temperature and record other information as it reenters in a controlled dive, transmitting recorded data to researchers. ATV-5 will also have a camera to record reentry from the inside of the vehicle.

Even though this is the last ATV flight, the knowhow and technology will be put to use to power NASA’s Orion spacecraft with the European Service Module, paving the way for the next era in  space exploration.

Considering how much it costs to get stuff into orbit, you would think it would be better to keep it there. The ‘trash’ might be a useful raw material for future space manufacturing processes.
Space junk generally might be gathered into large, easily tracked lumps, instead of being deorbited. Perhaps fleets of ion-propelled cubesats could attach to pieces of debris and bring them under control.

What the ISS really needs are multiple resupply ships that can also return stuff back to the space agencies that built it.