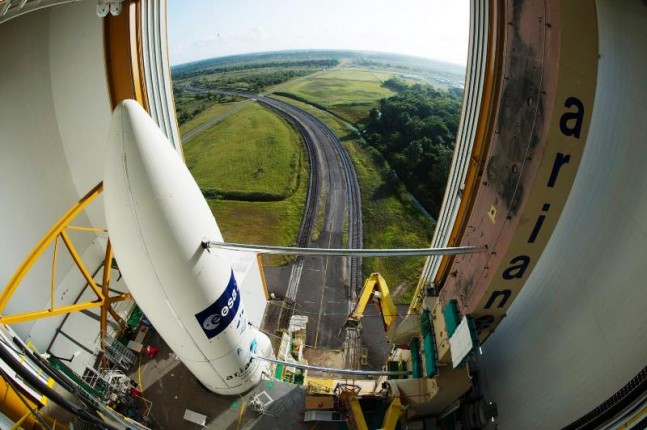 The mission, called Flight VA219, was originally scheduled to liftoff on July 24, but it was delayed several days to give engineers time to fix an issue with the launch vehicle. Carrying about 14,500 pounds of cargo, including water, food, fuel, air, spare parts, experiments, and clothing (there is no washing machine aboard the ISS) it is, according to ESA TV, the heaviest spacecraft ever launched by Europe. Georges Lemaitre atop the Ariane 5, prior to encapsulation. Photo Credit: ESA

The previous four ATVs, named Jules Verne, Johannes Kepler, Edoardo Amaldi, and Albert Einstein, have been launched approximately every 17 months over the course of the last six years to resupply the ISS. These vehicles are also designed to boost the ISS into a higher orbit at regular intervals. The station loses about 300 feet of altitude every day due to air drag, as there are still gas molecules at that level above Earth’s atmosphere, and the ATVs are used to compensate for that loss.

The latest and final ATV carries the name Georges Lemaître after the Belgian astronomer, a Catholic priest and professor of physics who proposed the theory of the expansion of the universe and what became known as the big bang theory.

The spacecraft will be carried to the ISS by an Ariane 5 ES rocket. The main cryogenic stage of the rocket is powered by a Vulcain 2 engine, which burns for just under 600 seconds and provides around 250,000 pounds of thrust in vacuum. Two solid boosters are ignited on the launch pad once the thrust output of the Vulcain is stable. The boosters provide more than 90 percent of the launcher’s total thrust at the beginning of the flight and burn for 130 seconds before they are jettisoned over the Atlantic Ocean. The ES version of the rocket is specifically tailored for ATV missions, and its main difference from the Ariane 5 ECA configuration is its storable propellant upper stage, which can do multiple burns to put payloads exactly where they need to go.

Georges Lemaître will dock at the aft port of the Russian Zvezda service module of the ISS, a procedure that is scheduled for 9:34 a.m. EDT (13:34 GMT) on Tuesday, August 12. It will remain attached to the ISS until late January 2015. When the ATV-5 reenters Earth’s atmosphere, a unique infrared camera will record its final fiery descent. The ATV Break-Up Camera was designed and developed in nine months by an ESA-led team, and a Reentry SatCom capsule will act like an airplane’s black box, storing the images and then transmitting them via an Iridium satellite link once the vehicle has broken up.

According to ESA’s website, the camera “will join Japan’s i-Ball optical camera and NASA’s Re-entry Break-up Recorder to give as full a picture as possible of the conditions inside the vehicle as it breaks up…NASA has flown similar experiments before with its recorder, while JAXA’s i-Ball gathered photos during the reentry of their supply ship in 2012.” For ESA, however, this has been a new challenge to meet. The ATV-5 will carry other experiments, one of which is LIRIS — Laser InfraRed Imaging Sensors — a set of autonomous rendezvous sensors meant to help future spacecraft dock with difficult targets, “such as orbiting debris or a Mars sample capsule,” according to ESA’s website. A demonstration version of the technology will tested for comparison with traditional methods of docking. The last four ATVs have docked with the ISS by using satellite navigation until they got close, at which point they used optical sensors to bounce light off reflectors on the station. LIRIS instead uses infrared cameras at about 18.5 miles out, and switches to lidar (the light equivalent of radar) at a little over 2 miles out. The sensors will scan the docking target while onboard computers process the data with new guidance navigation and control software.

The third notable experiment aboard Georges Lemaître will be an electromagnetic levitator, a furnace that can heat metals up to 2100°C and then quickly cool them while keeping them suspended in mid-air. Studying metals in this situation removes some of the scientific complexity that gravity usually adds, letting scientists get a better, purer understanding of the physics involved. ESA astronaut Alexander Gerst will load cartridges of metals into the levitator, and the machine will process them and record the data automatically.

Arianespace is a commercial European launch service that specializes in heavy-lift launchers. They recently used a Soyuz ST-B to successfully launch four satellites O3b Networks into orbit, also from the French Guiana spaceport. Their next scheduled launch for the ESA is the Galileo-FOC on August 22, when they’ll attempt to send the first two Galileo Full Operational Capability satellites (FM-01 and FM-02) of a total of 21 for Galileo, the European satellite navigation network. It will launch from Kourou as well, via a Soyuz-2 rocket. You are wrong saying “ as there are still oxygen molecules at that level above Earth’s atmosphere, and the ATVs …”. At the altitude of ISS the oxygen molecule abundance would be much smaller (if any) then compared with traces of light rare gasses (Helium, Neon), OH radicals and hydrogen molecules.

Changed it to “gas molecules” to generalize the nature of the air drag, thanks. The info was based on a separate space source.