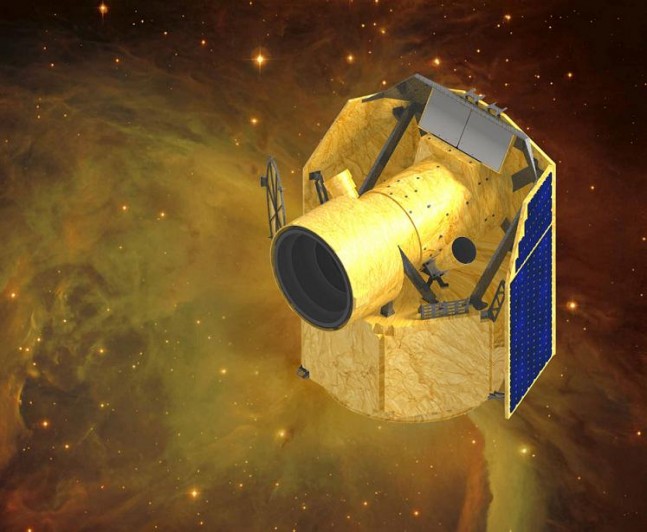 Just like the Pharaoh Cheops, who ruled the ancient Old Kingdom of Egypt, ESA’s CHaracterising ExOPlanet Satellite (CHEOPS) could be, someday, ruling in the field of exoplanet hunting. It will be the first mission dedicated to search for transits by means of ultrahigh precision photometry on bright stars already known to host planets.

“CHEOPS looks at stars that are already known to host planets and attempts to observe transits. I say attempts because its main targets are planets that have been discovered through Doppler techniques,” Don Pollacco of the University of Warwick, UK spokesperson for the CHEOPS mission, told astrowatch.net.

Large ground-based high-precision Doppler spectroscopic surveys carried out during the last 20 years have identified hundreds of stars hosting planets in the super-Earth to Neptune mass range and will continue to do so into the foreseeable future. The characteristics of these stars and the knowledge of the planet ephemerids make them ideal targets for precision photometric measurements from space. CHEOPS will be the only facility able to follow-up all these targets for precise radius measurements. Vacuum chamber where CHEOPS will be fully calibrated before it begins its mission. Photo Credit: ESA

“Doppler surveys have been going on for some time and have found a significant fraction of multiple and super-Earth mass planets, well before Kepler did this. Some proportions of these are expected to transit their host star – maybe 10 percent. As you know, when these transits are meant to occur you can look at these targets specifically at that time and avoid wasting too much time,” Pollacco said. “10 percent doesn’t sound much but these will be important targets in that they’ll be bright, already have Doppler curves and hence able to determine their densities. It’s likely that a few tens of planets may be discovered this way, there’s a handful from Kepler if that.”

Knowing where to look and at what time to observe, makes CHEOPS the most efficient instrument to search for shallow transits.

With an accurate knowledge of masses and radii for an unprecedented sample of planets, CHEOPS will set new constraints on the structure and hence on the formation and evolution of planets in this mass range.

“By knowing where to look and at what time, CHEOPS is the most efficient instrument to detect shallow transits. It will significantly increase the sample of exoplanets for which we know both mass and radius, providing new insights and constraints on formation models,” said Willy Benz from the University of Bern, Switzerland, the Principal Investigator for CHEOPS.

ESA is the mission architect for CHEOPS, responsible for spacecraft development and launch, and for the interface with the science community during science operations in orbit. CHEOPS is the first of the small-size (S class) missions of ESA, and was selected from 26 other proposed missions. These missions are designed to take full advantage of known technologies. They should be low cost and rapidly developed missions, in order to offer greater flexibility in response to new ideas from the scientific community.

“The need for a pointed space telescope to do high precision transit observations has been known for a while and there were various concepts already explored. In the UK, we had something nicknamed ‘BEE’, which was meant to follow up SuperWASP discoveries. CHEOPS was already under development when the first S mission opportunity arose and so it was in good shape to be submitted to this,” Pollacco revealed. “The S missions were meant to be opportunities for smaller ESA members to demonstrate their space industries and take the lead, so CHEOPS was extremely well placed.”

Pollacco admitted that CHEOPS is different to NASA’s exoplanet hunting missions like Kepler spacecraft or Transiting Exoplanet Survey Satellite (TESS). These are survey missions that look at large areas of the sky and discover transiting planets, while CHEOPS looks at stars that are already known to have orbiting planets.

“For TESS, it really remains to be seen what can be achieved, but, in any case, CHEOPS, with its superior accuracy, will produce more accurate transits, and hence densities of Doppler confirmed TESS planets,” he said. “A second aim for CHEOPS is to follow up transits discovered from other surveys, like the Next-Generation Transit Survey (NGTS), again because of its superior accuracy.” The satellite will fly at an altitude of between 650 and 800 km (400 and 500 mi), in a dusk-dawn heliosynchronous orbit, and will have a design lifetime of 3.5 years. “For CHEOPS, scheduling will be important given its low orbit, meaning that it can’t stare long in many directions,” Pollacco added.

CHEOPS should be able to cover at least 50 percent of the whole sky for a minimum total duration of 50 days of observation per year and per target. The observation may be interrupted up to 50 percent (goal would be 20 percent) of the satellite orbital duration (Earth eclipse, Sun, etc.).

CHEOPS mission will be implemented in partnership with Switzerland, through the Swiss Space Office (SSO), a division of the Swiss State Secretariat for Education, Research and Innovation (SERI). The University of Bern leads the consortium of 11 ESA Member States contributing to the mission and represented in the CHEOPS Science Team.

The science instrument is led by the University of Bern, with important contributions from Italy, Germany, Austria, and Belgium. Other contributions to the science instrument in the form of hardware, or in the science operations and exploitation, are provided by the United Kingdom, France, Hungary, Portugal, and Sweden. The Mission Operations Centre is under the responsibility of Spain, while the Science Operations Centre is located at the University of Geneva, Switzerland. “For historical reasons, UK industry is not playing a major role in CHEOPS. In the original baseline, we expected the UK to run the mission operations, but for a number of reasons that never happened,” Pollacco said. “However, we retain some software contributions and so some elements of the UK exoplanet community have stayed in touch with the mission. It’s worth noting that Didier Queloz [Swiss astronomer] moved to Cambridge from Geneva over the last couple of years but retains a significant post at Geneva specifically for CHEOPS work. In other countries, e.g. Germany, Italy, there is a far larger involvement, both technically and industrially, although the Swiss remain by far the largest contributor, as it should be.”

CHEOPS will most likely be launched into space by a Soyuz or Vega launcher from Kourou spaceport in French Guiana in December 2017.