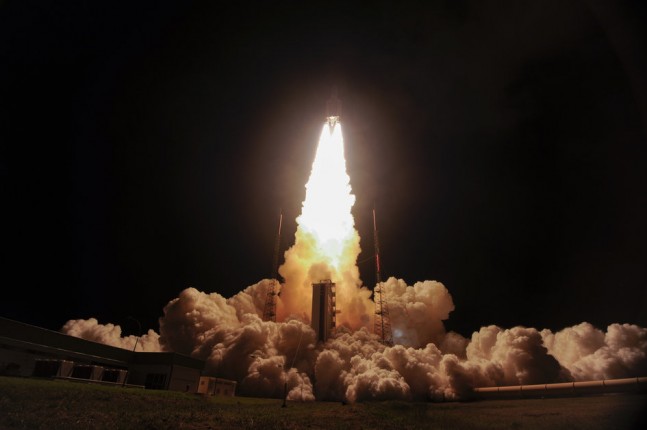 Like the four previous ATV missions, which started with the launch of ATV-1 back on March 9, 2008, the spacecraft will deliver several tons of supplies like water, air, food, fuel, clothing and spare parts, as well as experiments. With about 14,500 pounds of cargo it is, according to ESA TV, the heaviest spacecraft ever launched by Europe. Among the experiments aboard this final ATV mission is special hardware designed to provide never-before-seen views of a spacecraft burning up as it returns to Earth. If all goes according to plan, ATV-5 will return in late January 2015. Engineers, led by ESA, have developed the ATV Break-Up Camera (BUC), designed to capture infrared images from within the spacecraft as it’s destroyed when its mission ends. ESA has stated that the team working on the design and testing of this device had to work “at breakneck pace” within the last nine months to finish this unique infrared camera on-time for launch.

In conjunction with the BUC camera will be Japan’s i-Ball optical camera and NASA’s Re-Entry Break-up Recorder (REBR). All three will work together to give a comprehensive view of the violent destruction awaiting ATV-5 as it reenters Earth’s atmosphere.

Another addition to this ferry-observation goal is ESA’s Reentry SatCom capsule, designed to store images like an aircraft’s black box, and transmit the data back to Earth after the vessel’s break-up, with the use of an Iridium satellite link.

“These different instruments will complement each other,” said project leader, Neil Murray, in a statement released by ESA.

The greatest challenge for this project was to design a capsule that can transmit collected data back to Earth regardless of its position during reentry, and also survive the destructive heat that the hardware will encounter: around 2,732 degrees Fahrenheit (1,500 degrees Celsius). There is also a known blackout issue that occurs with spacecraft upon reentry, caused by charged gas particles and friction creating a cone of plasma that surrounds an object when it contacts the atmosphere at high velocity.

“The Reentry SatCom has an antenna, so that once ATV breaks up it begins transmitting the data to any Iridium communication satellites in line of sight,” said Murray, in the ESA statement.

“The break-up will occur at about 80–70 km altitude, leaving the SatCom falling at 6–7 km/s. The fall will generate high-temperature plasma around it, but signals from its omnidirectional antenna should be able to make it through any gap in the plasma to the rear.

“Additionally, signalling will continue after the atmospheric drag has decelerated the SatCom to levels where a plasma is no longer formed — somewhere below 40 km — at a point where Iridium satellites should become visible to it regardless.”

The BUC camera and other instruments will be installed on a rack at the rear of ATV-5 around five days before it is undocked from the ISS. Until then, crew members aboard ISS will unload around six tons of propellant, supplies and experiments, before loading the spacecraft with waste to be burnt up along with the vehicle when it is purposely deorbited.

All man-made objects in Earth’s orbit, unless acted upon by elevating thrusters, will eventually meet the same ferry end as ATV-5, even the multi-billion dollar ISS. Part of this final mission for ATV is to better understand what happens to large spacecraft that enter Earth’s atmosphere.

“The data should also hold broader value,” said Murray. “The project is proceeding under our ‘Design for Demise’ effort to design space hardware in such a way that it is less likely to survive reentry and potentially endanger the public.” The July 29 launch of this mission went nominally, marking the 60th successful Ariane 5 rocket launch in a row. ESA Mission Director Jean-Christophe Ronnet declared, “So far, so good,” as final checks were made, and at T-0, the Vulcain 2 engine of the Ariane 5 rocket’s main cryogenic stage ignited. Seven seconds later the solid rocket boosters did the same, and the rocket lifted off the pad.

The launch vehicle passed Mach 1 at approximately 48 seconds mission elapsed time, passing the speed of sound at an altitude of about 22,600 feet. Just a little more than one minute later, the rocket’s two SRBs separated and were sent tumbling toward the Atlantic Ocean far below. After about another minute, the Ariane 5 was sufficiently far enough beyond Earth’s thick lower atmosphere so as to allow the payload fairing to be jettisoned as well.

Main engine shutdown occurred at T+8 minutes and 48 seconds, after which the stages separated and the upper stage’s Aestus engine ignited.

At 17 minutes and 12 seconds into flight, the upper stage shut down temporarily, as planned. It coasted in its “parking orbit” for 42 minutes as it climbed to apogee, performing a series of attitude maneuvers in order to distribute sunlight (and its heat) evenly across its surface. It wasn’t until just over 59 minutes into flight that the second and final burn began, during which the spacecraft’s orbit was circularized at an altitude of about 161 miles. With ATV-5 injected into its proper orbit, the upper stage engine shut down again, and the ATV separated from the upper stage to commence its own journey to the ISS. Georges Lemaître is now autonomous, using batteries and four large solar panels for energy along with a GPS and star sensor for guidance, in cooperation with the CNES control center in Toulouse.

After the announcement of ATV-5 orbital insertion, Stéphane Israël, Chairman and CEO of Arianespace, said: “We are extremely proud of this successful ATV mission, a strong symbol of Europe’s role in this major international program, thanks to two flagship products from our space industry, Ariane 5 and the ATV. I would like to thank our customer, the European Space Agency, for continuing to express its trust in Arianespace, within the scope of our original mandate, namely to guarantee independent access to Space for Europe. I would also like to congratulate Airbus Defence and Space, the prime contractor for these two programs, as well as all other companies involved, for their remarkable work that has driven the success of these complex missions. This year will be decisive for the future of the European space transport industry, so this evening’s success, the 60th in a row for Ariane, is a very timely reminder of our industry’s excellence, and our proven ability for innovation and performance.”