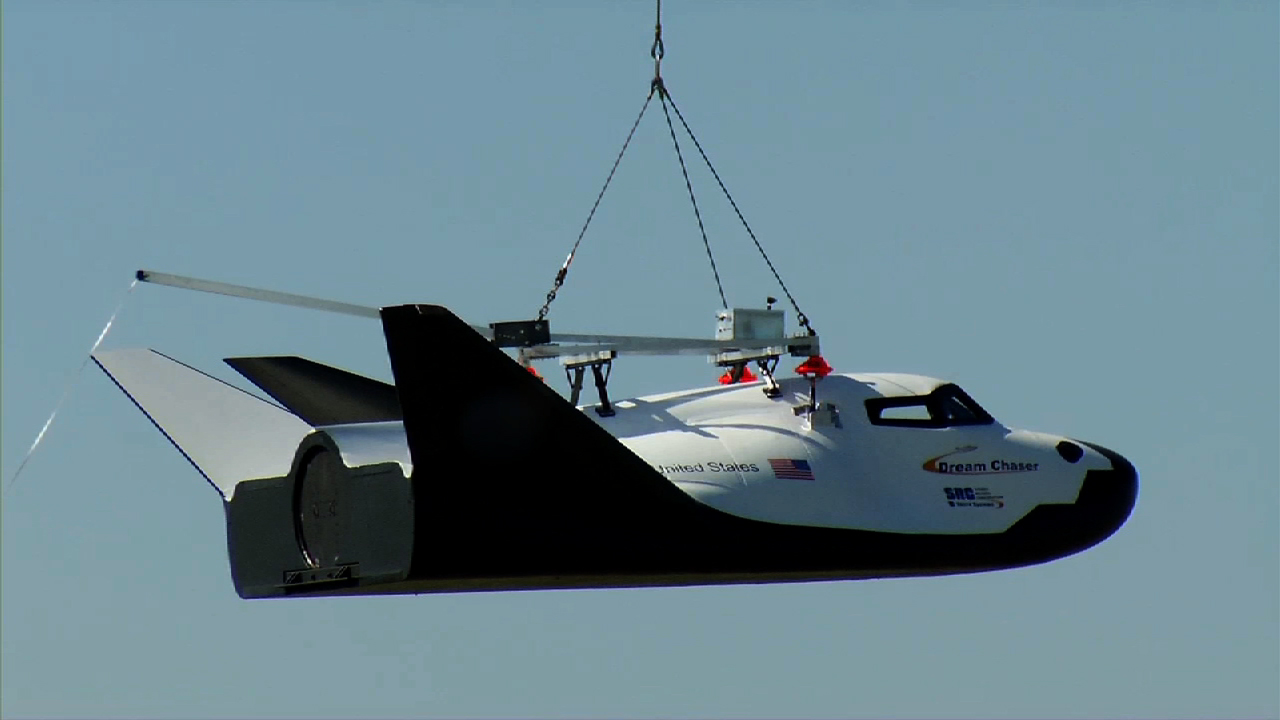 Sierra Nevada Corporation's Dream Chaser space plane conducted a free flight test at 9:45 a.m. PDT which concluded with the test article of the craft flipping over on the runway at Dryden Flight Research Center in California. Photo Credit: SNC / NASA

An engineering test article or “ETA” of Sierra Nevada Corporation’s (SNC) Dream Chaser spaceplane, after, according to NASASpaceflight.com, conducting a “perfect” free flight which began at 9:45 a.m. PDT, encountered a mechanical failure during landing. The test article flipped over on landing. It is unclear what impact this will have on the remaining tests that SNC needs to conduct under NASA’s Commercial Crew integrated Capability or “CCiCap” – a NASA effort to cede transportation of astronauts to the International Space Station (ISS).

The 9-meter-long craft, resembling a miniature space shuttle with upturned wings, was dropped from an Erickson Air-Crane heavy-lift helicopter where it glided to an automated approach at NASA’s Dryden Flight Research Center at Edwards Air Force Base in California.

Today’s events follow two captive flights, in the second of which the ETA was carried under an Air-Crane for about two hours over Dryden at altitudes of up to 3,800 meters to put the vehicle’s flight computer, guidance, navigation and control systems, and aerosurfaces through their paces. Additionally, the landing gear was lowered and nose skid deployed. The Dream Chaser ETA has also undergone tow tests, involving it being pulled behind a pickup truck along the concrete landing strip at various speeds.

Today’s failure is being defined as “mechanical” in nature. According to NASASpaceflight.com, the craft touched down, but the left landing gear failed to deploy, at this point the Dream Chaser ETA placed weight on the landing gear and the ETA flipped over on the runway. At this point, it is unclear how much damage the ETA has suffered or even if it can be repaired. Until today’s events, Dream Chaser had successfully completed all the tests that were laid out in front of it. Photo Credit: SNC

It should be noted that future versions of the Dream Chaser will not use the landing gear design that failed today.

Sierra Nevada’s mini orbiter follows in the wheel tracks of a long line of NASA lifting bodies and, most famously, Enterprise, the first flight-capable version of the space shuttle, which performed a series of approach-and-landing tests at the same site in the 1970s. Ironically, today is the 36th anniversary of Enterprise’s last free flight – conducted by Fred Haise & Gordon Fullerton. It was the fifth free flight in that series and they also landed at the Dryden Flight Research Center (Edwards AFB)

Dream Chaser is the only one of three vehicles competing for selection in NASA’s Commercial Crew Program (CCP) – the others being Boeing’s CST-100 and SpaceX’s Dragon capsules – that returns to land on a runway.

A successful series of drop tests, including safe landings, is crucial to SNC”s hopes of progressing to the next stage of its CCiCap ambitions, the operation of the Dream Chaser Flight Test Vehicle (FTV), which is presently being built. Dependent on the successful conclusion of these tests, Dream Chaser is planned to roar to orbit atop United Launch Alliance’s Atlas V rocket. It is unclear how today’s failure will impact future tests of Dream Chaser or its status in the CCiCap hierarchy. Photo Credit: SNC / NASA

Wish them luck, getting the issues sorted out.