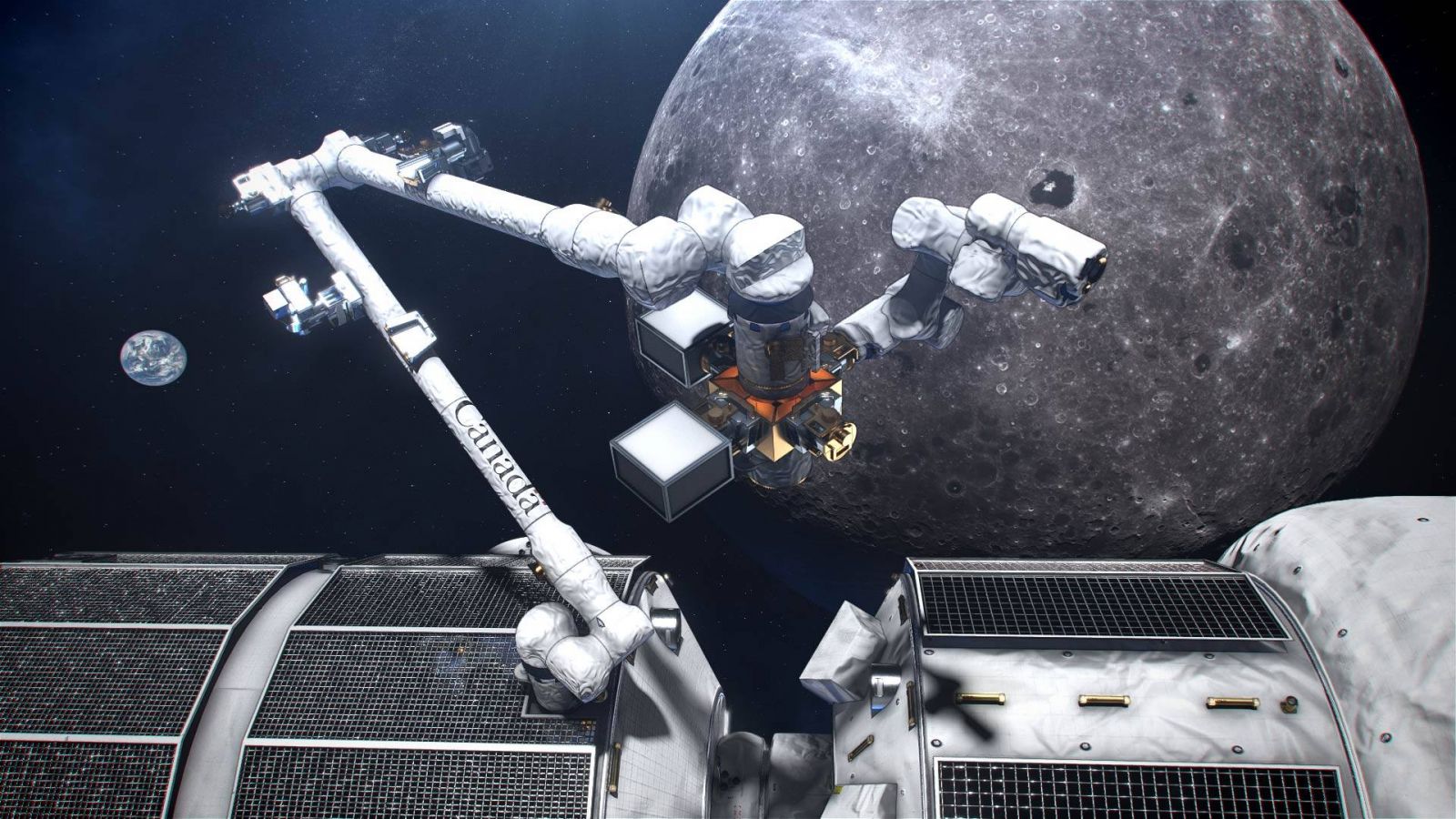 An artist’s rendering of “Canadarm3” at the proposed Lunar Gateway. The Canadian Space Agency has committed to joining NASA on this lunar outpost project. Image Credit:

Having been involved with the United States in its space endeavors for decades with the Space Shuttle and International Space Station programs, Canada has committed to continuing that partnership and join the NASA-led Lunar Gateway project.

Part of NASA’s efforts to return humans to the Moon include building an outpost circling in a near-rectilinear halo orbit around the Moon. This “space station” would be much smaller than the International Space Station and support crews for up to several months at a time. Eventually, it would be used as a base camp to send astronauts to the lunar surface. 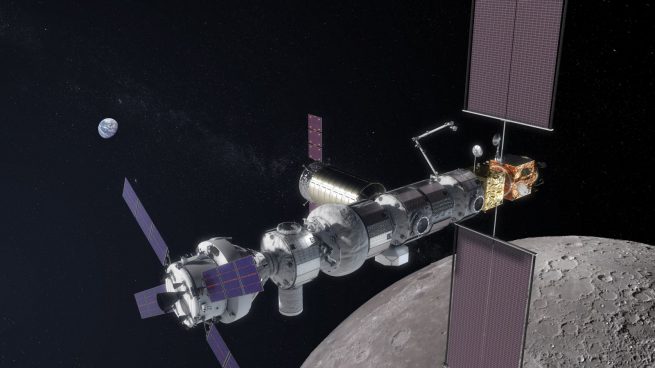 An illustration of NASA’s Lunar Gateway with the Orion spacecraft and a commercial logistics module docked with the deep space outpost. Canada has committed to building a next-generation robotic arm to be part of the architecture. Image Credit: NASA

“We are excited that Canada will be a vital ally in this lunar journey as they become the first international partner for the Gateway lunar outpost with their 24-year commitment to deep space exploration and collaboration,” said NASA Administrator Jim Bridenstine in an agency statement.

For its part, the Canadian Space Agency and the Canadian government has committed over $2 billion over 24 years to develop and operate a next-generation robotic arm called Canadarm3 to service the Gateway.

“Canada’s historic investment will create good jobs for Canadians, keep our astronaut program running and our aerospace industry strong and growing, while opening up a new realm of possibilities for Canadian research and innovation,” said Canadian Prime Minister Justin Trudeau during a press conference announcing Canada’s commitment. “With the Lunar Gateway, Canada will play a major role in one of the most ambitious projects ever undertaken. Together, with our partners from around the world, we’ll continue to push the boundaries of human ambition, and inspire generations of kids—and adults—to always aim higher and aspire to something greater.”

Possibly the most visible part of Canada’s space partnership with the United States is its robotics contributions. The original Canadarm design flew on all of NASA’s Space Shuttles. In nearly every iconic photo from that era, the arm with the Canadian flag is present, including in the deployment of iconic spacecraft such as the Hubble Space Telescope. 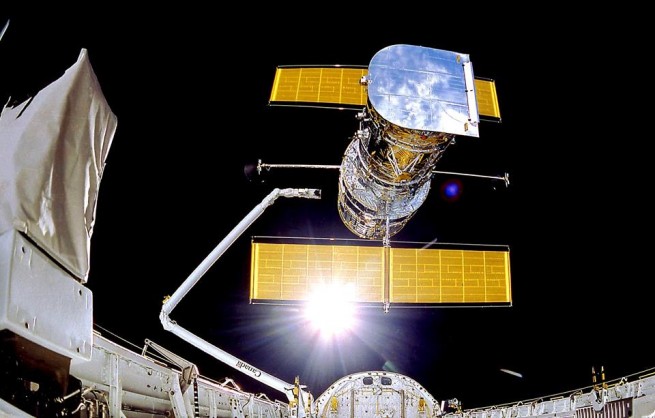 Additionally, Canadarm was used in the initial phase of construction for the International Space Station. The task of moving massive modules around in space, however, would be moved to a newer, more capable manipulator system called Canadarm2.

Canadarm2 was launched aboard Space Shuttle Endeavour’s STS-100 mission in 2001. It would later be joined by the Special Purpose Dexterous Manipulator, called Dextre, as a sort of “robotic hand” to go with Canadarm2. 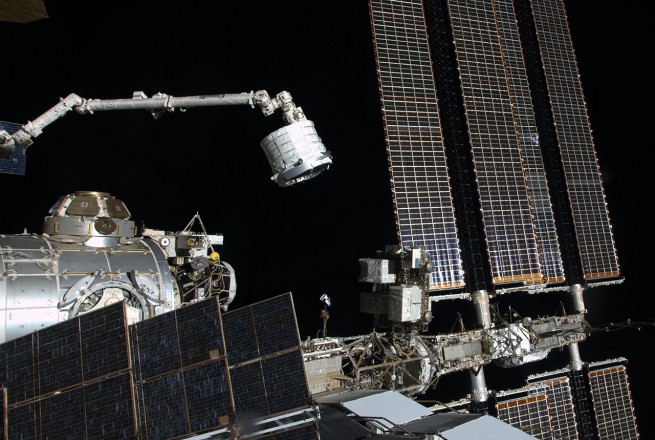 Canadarm2 was used to attached the commercial BEAM module to the International Space Station in 2016. Photo Credit: Tim Kopra / NASA

Over the years, Canadarm2 and Dextre have serviced the International Space Station by assisting astronauts during spacewalks, moved modules, captured visiting vehicles and berthed them, deployed CubeSats, performed experiments and more.

The proposed Canadarm3 would take these capabilities to the next level by integrating autonomy and artificial intelligence into the design.

Unlike the International Space Station, the Lunar Gateway is not planned to be permanently crewed. It will host astronauts for up to several months at a time as they conduct their mission, be it orbital (as is planned initially) or as a staging point for surface sorties using reusable commercial landing systems.

As such, Canadarm3 would need to be able to execute tasks with minimal human input in an environment much tougher than low-Earth orbit.

“Canada’s technologic achievement as part of Gateway lunar outpost will be a part of creating the vital backbone for commercial and other international partnerships to get to the Moon and eventually to Mars,” Bridenstine said. “We are thrilled to work with Canada on the next generation of its robotics to help carry out incredible missions at the Gateway lunar outpost and to collaborate in our future on the lunar surface and deep space.” 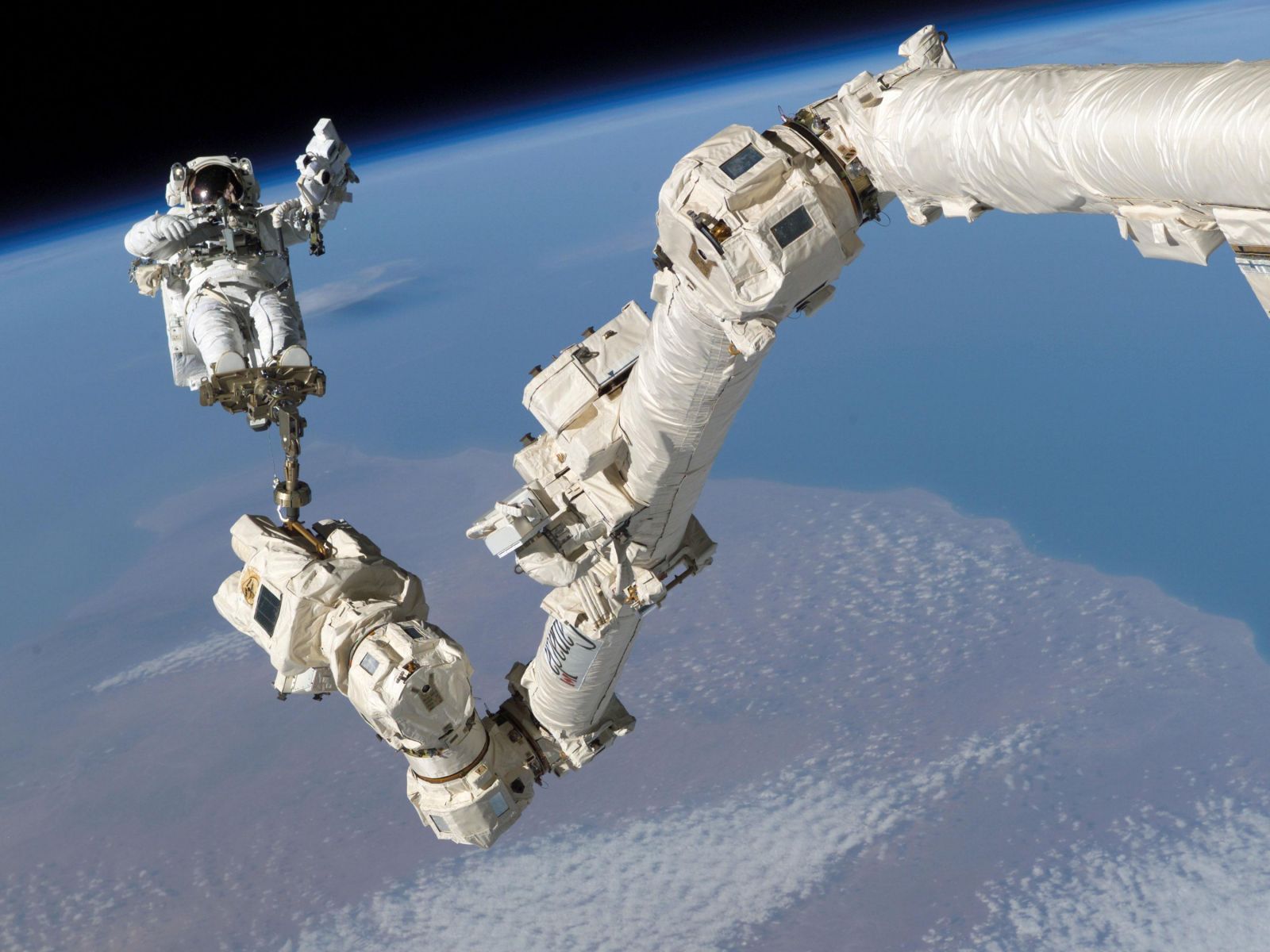 NASA astronaut Steve Robinson rides Canadarm2 to a work area in a spacewalk during the STS-114 mission to the International Space Station in 2005. Photo Credit: NASA

Partnering with NASA as it moves beyond low-Earth orbit would enable Canada to continue its space endeavors. According to a press release issued by the Canadian Space Agency, the country’s space sector employs 10,000 highly-skilled workers and generated $2.3 billion for its economy in 2017, exporting over $2.1 billion in sales.

Canada has also committed to continuing its participation with the United States on the International Space Station program and is expected to remain a vital partner for the foreseeable future. 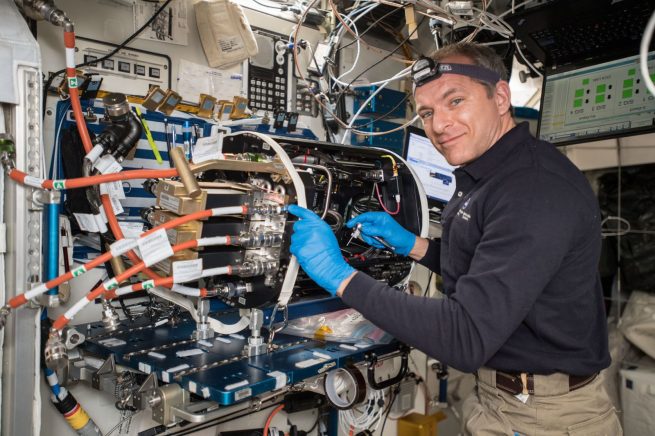 The first modules for the ISS were launched in 1998 and astronauts have been living aboard the low-Earth orbit outpost since 2000. During that time, three Canadian astronauts have lived aboard it in long-duration missions. The most recent, David Saint-Jacques, has been at the station since December 2018 and is expected to return to Earth in June 2019.

Between the ISS and Space Shuttle programs, eight Canadians have flown in space 17 times. Three of those missions were long-duration flights aboard ISS (including Saint-Jacques ongoing Expedition 58/59 mission).

Currently, the U.S. government is slated to end its funding commitment to the ISS in 2024, however, there are efforts by the U.S. Congress to extend that commitment to 2028 or even 2030 in order to give commercial industry more time to build a sustained presence in low-Earth orbit either by taking over parts of the now-20-year-old outpost or launching smaller, more purpose-driven orbital platforms.

“Going forward to the Moon, we’re making progress on a Gateway lunar outpost where astronauts can live and work in orbit and from which we can go to the lunar surface, again and again,” Bridenstine said. “We’ve begun the process for industry partners to deliver the first science instruments and tech demonstrations to the Moon’s surface, and we’re going to keep up that drumbeat until we’ve built human landers to get us back to the Moon by 2028.”

On 28 February , 2019 , Canada had announced that it was joining the NASA -led project known as the Lunar Gateway. Now , the news reports in April , 2019 indicate that the U.S. has called on the Agency (NASA) to put American on the Moon again by 2024 – about four years earlier than planned under the Lunar Gateway project , raising question about the future of a lunar space station. A spokesman for the Canadian Space Agency (CSA) is reported to have noted that Canada’s Lunar Gateway money confirmed in 2019 federal budget , is not yet committed as NASA proceeds with a replanning of their lunar campaign. In this context , it is apt to let readers know this Vedic astrology writer’s prediction through article – “ Vedic astrology predictive alerts for Canada in coming year 2019” – brought to public domain widely in last October -November 2018. In the prediction , it was indicated that during April and around and September -October of 2019 , space programs and projects of Canada could cause concern due to constraints of finance or technical know –how which could not be visualized well in time earlier. It seems the prediction of this writer has been meaningful in substance.