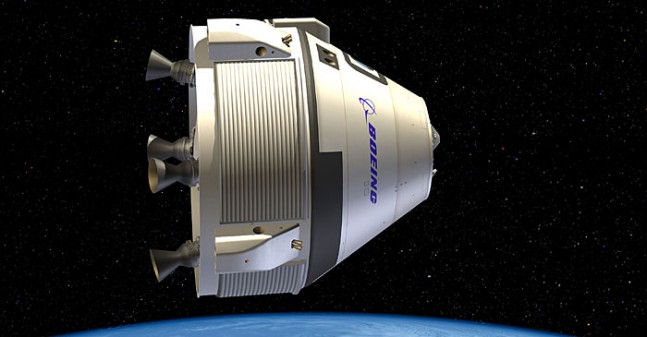 Boeing's CST-100 has recently completed a hardware design review which places it one step further down the road to launching astronauts to the International Space Station. Image Credit: Boeing

The Boeing Company recently announced the completion of more developmental requirements for their Crew Space Transportation 100(CST-100)-100 spacecraft that includes a software safety test and hardware design review. Passing this phase of testing is considered a milestone for a company that is competing to return flights of astronauts from U.S soil in the coming years.

Boeing’s current phase of testing is the Critical Design Review (CDR), which included system analysis of their Launch Vehicle Adapter (LVA) that will connect the CST-100 spacecraft to the rocket that will take it into orbit. This CDR testing was performed to establish the flight stability of the LVA in a wind tunnel and verified that Boeing’s design is applicable for production.

CST-100’s initial launch vehicle is a United Launch Alliance Atlas V rocket, which played a role in the second phase in its recent testing. Atlas V rocket’s emergency detection system also passed an evaluation by showing its ability to communicate with the capsule in the event of an emergency.

“Safety is a key element of the CST-100, from the drawing board to design implementation and beyond,” said John Mulholland, vice president and program manager, Boeing Commercial Programs in a statement released by Boeing. “These tests help to validate that the launch vehicle adapter and emergency detection system are fully functioning and able to ensure a safe launch for our future passengers.” Boeing’s CST-100 recently concluded a hardware design review and software safety test. This is part of NASA’s effort to have its astronauts travel to the International Space Station via commercial providers. Photo Credit: ULA

More testing is still to come for CST-100 that will include a software review in the spring and a greater comprehensive integrated CDR this summer. The completion of CST-100 CDR phase is vital to ensure time and budget requirements are being met, and to begin the full-scale manufacturing, assembly, and final integration of a flight-ready spacecraft.

Boeing states that they are on target to meet all of their requirements for their agreement with NASA’s Commercial Crew Integrated Capability (CCiCap) program that runs through till August of this year. Continued success with NASA’s Commercial Crew Development (CCDev) program will bring Boeing closer to their goal of supplying manned missions to the International Space Station.

CCiCap is the third round of NASA’s CCDev program that requires companies that participate to show completed end-to-end designs that include spacecraft, launch service, launch system, and ground and mission operation and recovery. This is part of NASA’s post-shuttle era mission to work with private companies to develop safe, reliable, and cost efficient transportation systems to supply cargo and crew to low-Earth orbit.

There are three companies currently working towards this goal along with NASA in the CCiCap phase. Sierra Nevada Corporation with the Dream Chaser spacecraft, Space Exploration Technologies (SpaceX) with the Dragon spacecraft, and The Boeing Company with the CST-100 spacecraft.

Boeing Defense, Space & Security, is the unit of The Boeing Company that is overseeing the Commercial Crew Program spacecraft development. This $33 billion business is one of the largest working in defense, space and security, and has a long track record of aeronautical development for military use.