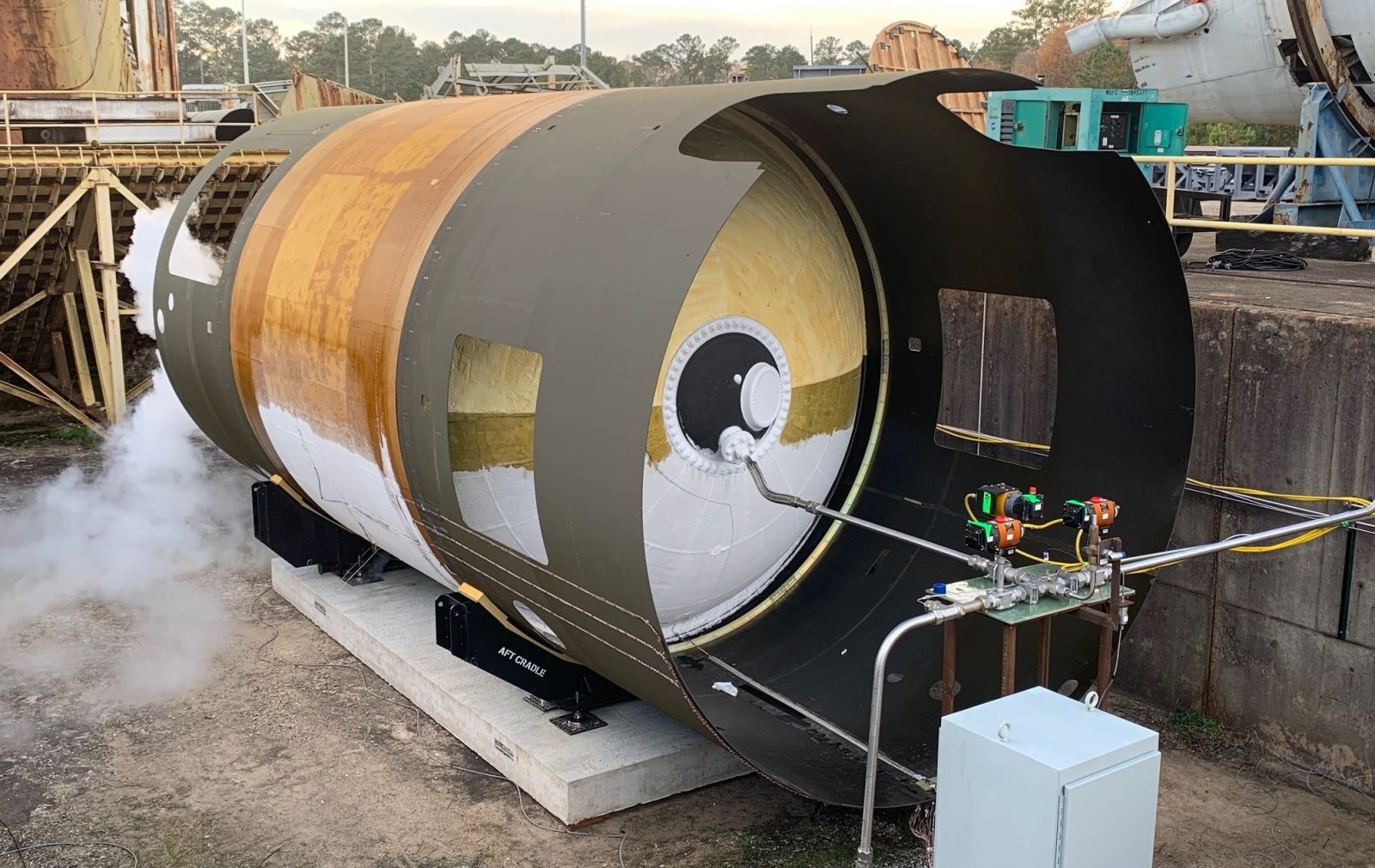 At the end of 2021, Boeing completed a series of tests on a “large, fully-composite, linerless” cryogenic tank at NASA’s Marshall Space Flight Center in Huntsville Alabama, the company said in a February 2022 news release.

While the reusable tank shell was initially made as flight hardware for the now-canceled Experimental Spaceplane Program, the company said it is using it to advance new technologies for use in future aerospace vehicles, including NASA’s Space Launch System.

The composite tank is 14 feet (4.2 meters) in diameter and is similar in size to tanks intended for the Exploration Upper Stage of the Block 1B variant of the SLS rocket, which could fly as early as 2026 during the Artemis 4 mission.

It’s unclear how early a composite cryogenic tank might be used in the design of the Exploration Upper Stage. The upper stage already completed a critical design review with NASA at the end of 2020. The more-traditional design is expected to allow the SLS Block 1B to be able to send 38 metric tons into a translunar injection trajectory.

The SLS Block 1, with an Interim Cryogenic Propulsion Stage, is designed to deliver up to 27 metric tons on a lunar trajectory. Its first flight, Artemis 1, is slated for later this year and will see an uncrewed Orion spacecraft placed into a distant retrograde orbit around the Moon.

Even before a composite tank upgrade, the Block 1B SLS is expected to be able to send a crewed Orion spacecraft and a secondary payload — such as components for NASA’s Lunar Gateway — to a near-rectilinear halo orbit around the Moon.

An Exploration Upper Stage with the weight-saving composite technology may contribute an increase of 30% of payload mass compared with traditional metal structures, Boeing said.

“Composites are the next major technological advancement for large aerospace cryogenic storage structures,” said Boeing Composite Cryotank Manufacturing Lead Carlos Guzman in a company news release on Feb. 2, 2022. “And while they can be challenging to work with, they offer significant advantages over traditional metallic structures. Boeing has the right mix of experience, expertise and resources to continue to advance this technology and bring it to market in a variety of applications across aerospace and aeronautics.”

Testing of the tank, which was funded by the Defense Advanced Research Project Agency, or DARPA, as well as Boeing, proved the tank could withstand pressures 3.75 times the design requirements without major structural failure, the company said.

“NASA’s support through this testing has been invaluable,” said Boeing Test Program Manager Steve Wanthal. “We were able to use their technical expertise and investments made in the testing infrastructure at the Marshall Space Flight Center to continue to advance this technology, which will ultimately benefit the entire industry.”