After a 2018 postponement, Blue Origin is targeting a new date to send the company’s third New Shepard rocket on its fourth flight — one with a wide range of experiments supported by NASA.

Blue Origin said it had fixed a ground structure problem and the rocket and weather are ready to support a flight above the company’s West Texas launch site. Following an additional delay due to high winds and a technical issue announced Jan. 20, NS-10 was expected to leave the pad at about 9 a.m. CST (10 a.m. EST / 15:00 GMT) Jan. 22, 2019.

However, more heavy winds are forecasted for the Tuesday attempt. As such, Blue Origin tweeted it would now be targeting Wednesday, Jan. 23. 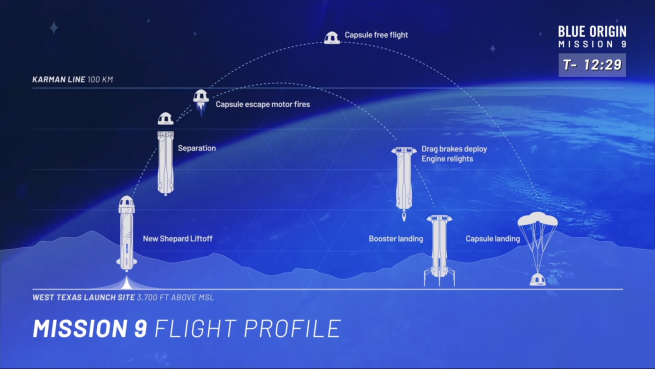 A Graphic of a flight profile for a typical New Shepard mission. This one was for the ninth flight of the vehicle system in July 2018. Image Credit: Blue Origin

If things go as planned the launch will mark the 10th for New Shepard. This particular flight is being flown under NASA’s Flight Opportunities program and, despite the U.S. government being partially shutdown, is moving forward.

While NS-10 is sponsored under a NASA initiative, the payloads it will carry do not entirely come from the U.S. space agency itself. In fact, just one of them originated from a NASA center.

These experiments will study means to develop more environmentally sound rocket fuels (Purdue), how dust behaves after surface contact on voyages to the Moon, Mars and other far-flung destinations (UCF) as well as means to use technology designed for the International Space Station so that it can be repurposed for suborbital flights, enabling biological research from this easier-to-reach destination. 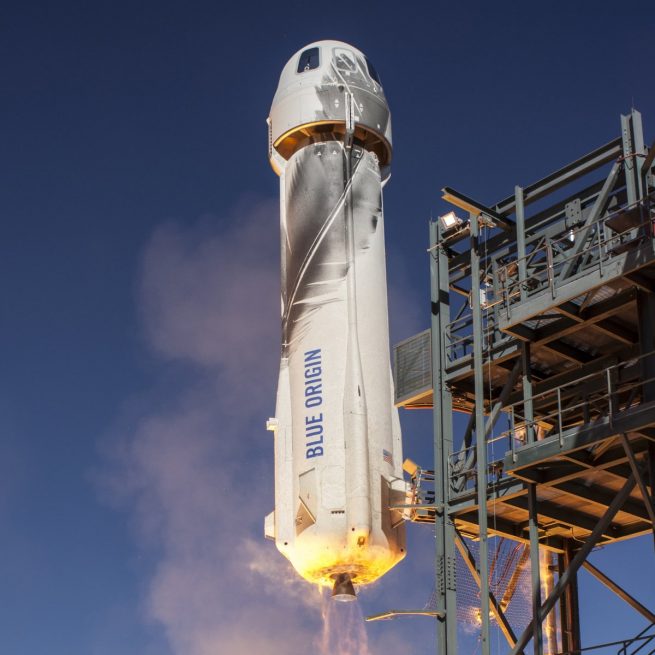 Meanwhile Controlled Dynamics Inc. is eyeing a means to create a buffer between a launch vehicle and the payload. Given the massive amount of vibrations caused by the unbridled fury of rocket thundering off the pad and the need to accurately monitor fuel levels in a microgravity environment, these experiments could provide critical services for NASA.

The U.S. space agency and other dedicated science organizations are also using the NS-10 mission to conduct research of their own. NASA’s Goddard Space Flight Center is looking to test a new way to keep electronics systems chilled inside the cramped conditions within a spacecraft.

The flight of NS-10 will not be the first rodeo for one of Blue Origin’s customers. The Johns Hopkins University Applied Physics Lab has had one of their payloads fly on Dec. 12, 2017, with APL’s JANUS platform.

For this go around APL is hoping to gain a better grasp naturally occurring electromagnetic fields in and around New Shepard.

While it might not be an orbital mission, sending payloads up 60 miles (97 kilometers) into space on a suborbital trajectory allows experiments to get a taste of microgravity and shortly thereafter be back in the hands of researchers for analysis.