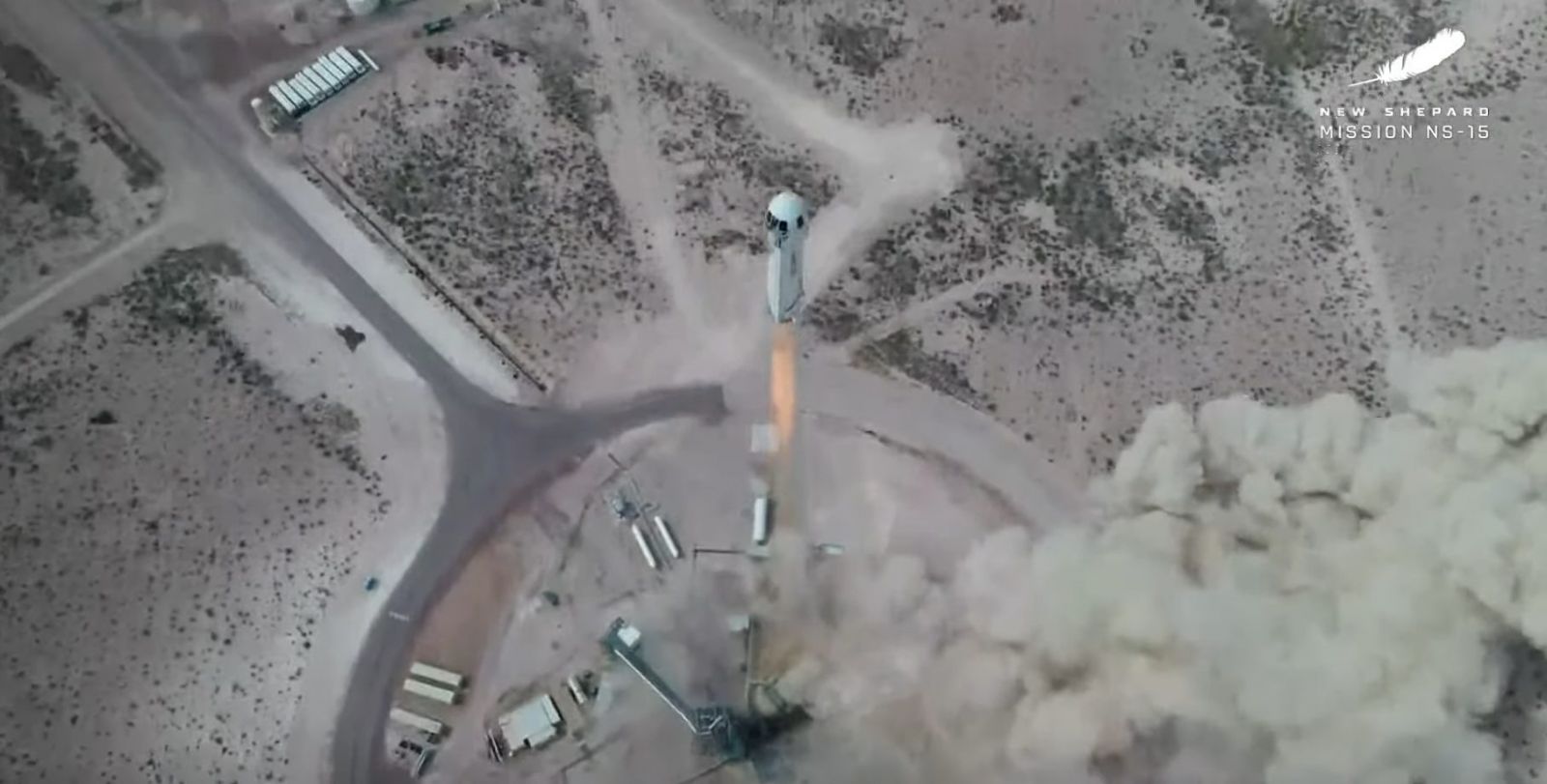 New Shepard Mission NS-15 launches onto a suborbital trajectory with its crew capsule “RSS First Step” riding atop. Aboard was just a test dummy named “Mannequin Skywalker” as well as more than 25,000 postcards from the Club for the Future nonprofit organization. Credit: Blue Origin

The test took place at about 11:51 a.m. CDT (16:51 UTC) at the company’s “Launch Site One” test facility in West Texas. It was the 15th launch in the New Shepard program, hence the NS-15 mission name. It serves as a verification step for the vehicle and operations prior to flying astronauts, according to the company.

The NS-15 mission utilized the same upgraded booster and capsule that last flew on the NS-14 mission on Jan. 14. The capsule is named RSS (Reusable Space Ship) “First Step” and is outfitted with cabin comfort features not found on previous iterations such as temperature and acoustic control, display monitors, and capsule communications equipment. 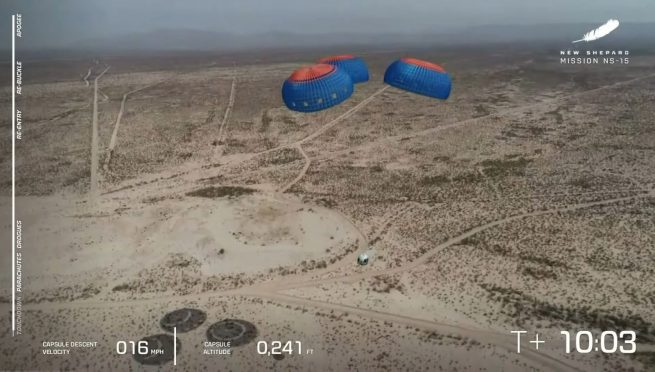 Blue Origin’s RSS First Step capsule floats down to the ground under three main parachutes. Just a few feet above the surface, soft landing jets cushion the vehicle in its final moments before it hits the ground. Credit: Blue Origin

In order to test these new systems as well as rehearse future astronaut operations, this mission featured the first human occupation of the vehicle during the countdown, though they would not stay on board for the flight.

Two Blue Origin employees stood in for astronauts on an operational mission during a planned hold before the flight in order to rehearse the exact procedures that operational customer flights would require such as strapping in, communications checks, and securing of the hatches.

They then exited the capsule leaving behind the company’s signature sensor-laden test dummy “Mannequin Skywalker” to actually take the flight and gather data as it has done on many previous missions. The name is a clever riff on the character “Anakin Skywalker” from the “Star Wars” franchise.

The NS-15 launch went off without a hitch with the vehicle ascending to a peak altitude of roughly 348,753 feet (106.3 kilometers) and achieving a speed of 2,247 mph (3,616 kph) according to the Blue Origin webcast. The company expects to have more exact numbers later.

Both booster and capsule also aced their landings roughly 10 minutes later at their respective touchdown zones. The stand-in astronauts then returned to the capsule to rehearse post-flight procedures such as opening the hatch and egress from capsule at the landing site.

To cap off the day’s activities Blue Origin’s webcasters also announced that Mannequin Skywalker and a New Shepard seat would be donated to the U.S. Space and Rocket Center in Huntsville, Alabama, as an exhibit to tell the story of their contributions to human spaceflight.