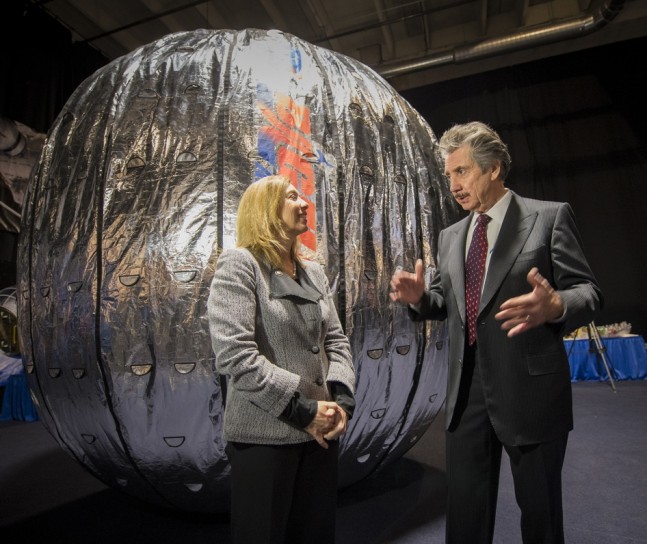 On Thursday, March 12, reporters will have a chance to examine and photograph Bigelow Aerospace’s Expandable Activity Module (BEAM) before it is shipped to NASA’s Kennedy Space Center in preparation for launch. BEAM will be launched to the International Space Station (ISS) later in 2015 aboard CRS-8, the eighth contracted SpaceX resupply mission to the orbiting. The BEAM will be installed on the aft port of the Tranquility node. Mike Gold, Bigelow’s director of D.C. operations and business growth, and Bill Gerstenmaier NASA’s chief of human exploration and operations, championed commercial activity on the ISS, will answer questions from the media.

Bigelow Aerospace is a startup company based in Las Vegas, Nev., which specializes in expandable space modules—essentially balloons. Robert Bigelow formed the company in 1998 and licensed the technology from NASA’s TransHab project which was canceled in 2000. The House bill that canceled TransHab included an option to lease the technology to a private company.

Bigelow purchased the rights to the patents and since then has developed the Genesis I and Genesis II prototypes which were launched in 2006 and 2007, respectively, “proving that this expandable architecture can successfully withstand the vibration and loads of the launch environments,” according to a 2014 promotional video.

As noted, BEAM will be launched as a secondary payload in the cab of a SpaceX Dragon capsule lofted into orbit by a Falcon 9 v1.1 rocket. The robotic Canadarm2 will then attach it to the aft port of the Tranquility module. Once attached to the space station, it will be expanded by a pressurization system that will inflate it to its full size of approximately 13 feet. The BEAM will remain on the ISS for two years. During that time, astronauts will periodically enter the module and test its performance. They will also measure radiation levels in the module for comparison with radiation levels in the Space Station’s other, more traditional aluminum modules. The BEAM’s skin is made of several layers including a layer of Vectran, a bulletproof fabric stronger than Kevlar which, according to tests, will not be penetrated by micrometeoroids that would penetrate the ISS’s aluminum modules. The radiation shielding is comparable to that in the rest of the ISS, but without the secondary effects produced by particles disintegrating as they pass through the aluminum. The BEAM walls also absorb sound better.

At the end of two years, the BEAM segment will be jettisoned from the station, afterward it will burn up in Earth’s atmosphere.

At a panel in Oct. 2014, Gold discussed the BEAM and Bigelow’s plans to commercialize space.

“Low Earth Orbit (LEO) will become a commercial domain,” Gold said. “Maybe it’s difficult to see at this point, but we go back to telecom—there was a time when every communications satellite was owned by the government.”

Gold added that private space activities are complicated by the International Traffic in Arms Regulations (ITAR), calling it the greatest barrier to getting something off Earth.

“We cannot fight the New Space vs. Old Space battle,” Gold continued, “with so few companies. The pie is too small. We need to come together as space enthusiasts.” “The International Space Station is a uniquely suited test bed to demonstrate innovative exploration technologies like the BEAM,” Gerstenmaier said. “As we venture deeper into space on the path to Mars, habitats that allow for long-duration stays in space will be a critical capability. Using the station’s resources, we’ll learn how humans can work effectively with this technology in space, as we continue to advance our understanding in all aspects for long-duration spaceflight aboard the orbiting laboratory.”

In the future, Bigelow plans to launch the B330, which was derived from the TransHab. At 330 cubic meters (hence the name), and a length of 22 feet (6.7meters), the B330 is larger than any of the ISS modules. Its docking ports will be compatible not only with other B330s, but with a variety of other types of spacecraft.

Bigelow plans to launch a space station that will consist of two B330s, which will provide two-thirds the habitable volume of the ISS. Bigelow’s long-term plans include both space tourism and missions to the Moon and Mars.

Work, work, work.
Looks like just a lotta work for Gwynne Shotwell and her team for years and years to come.
Who thinks up these crazy ideas?
Space Hotels?
They will probably have Supercharger Stations right out front.
Do ya think a HyperLoop works in Space?
Got any ideas about who will install the solar energy system?
The Space Hotels will stay warm & cozy with heaters run on Home Storage battery Packs.
This integration stuff is really getting vertical

Why all the Space X hate? Laid off from ULA?

Bigelow Space is going to be huge in the near future. I for one can’t wait for it to happen.

I am a fan of SpaceX / Tesla / SolarCity

So Longenecker, are you also a fan of Musk’s scandalous usage of prison convict laborers in his SolarCity venture up in Oregon?
See
http://www.oregonlive.com/politics/index.ssf/2015/02/oregon_signature_solar_project.html with this quote where a SolarCity subcontractor admits to using convicts.
“Under a subcontractor, Norcross, Georgia-based Suniva, the panel work went behind the walls at the Federal Correctional Institute in Sheridan. Inmates paid 93 cents an hour assembled the panels. That was in contrast to SolarWorld factory pay — $11 an hour to start.

Craven acknowledged that using inmate labor “may not have been in the spirit” of the tax credit program. He said state officials knew prisoners were involved.

State officials said they were unaware of the inmate component until questioned recently by The Oregonian/OregonLive.

or another take on convict labor
http://thefederalist.com/2015/03/04/not-content-with-enormous-taxpayer-subsidies-elon-musk-turned-to-prison-labor-for-cost-savings/

Great to see Bigelow continuing to move forward. Wish this was progressing quicker, but they seem to have support of major players/investors. Can’t wait for CRS-8 to launch now.

John Longenecker asks if the Hyperloop would work in space. I do wonder if the idea came to Elon Musk while considering transport suitable for use on Mars. The Hyperloop would probably work there out in the open without a low pressure tube, providing there is enough air to float the skids.

That would be way cool zipping from Hotel to Hotel in Space and real quick on Mars
Elon Musk will create a another space transport system
in the shower one morning
and “one more thing” is sooo back!

I do not understand why the module will trashed after 2 years. Has anyone seen a statement why?
The cost to create habitat per cubic meter is so huge. The waste of throwing it away seems so… (I cannot ever think of an appropriate term)

Agreed. Seems like a waste of assets. If nothing else, it could be a quiet getaway for the crew in their limited time off.

They might be concerned that the room’s walls don’t provide the safety margins after that amount of time. It’s just an experiment. I suspect that the more valuable thing is where the unit is docked. There’s a limited number of those ports and NASA might be wanting to use the ports for something else, like maybe a propulsion module to use after the Russian’s take their toys and go home.

Does seem like a waste to burn the unit up afterwards though. Maybe Bigelow could take the unit and hook it to some other future structure?

Brian. The walls of BEAM as well as the Genisis modules that have been on orbit for more than 2 years have better protection levels, both radiation and impact, than the current aluminium cans that comprise the ISS? In addition, Bigelow is adding water bag protection pockets to the next modules i.e. BA330, to provide even more radiation protection for beo use.
Cheers