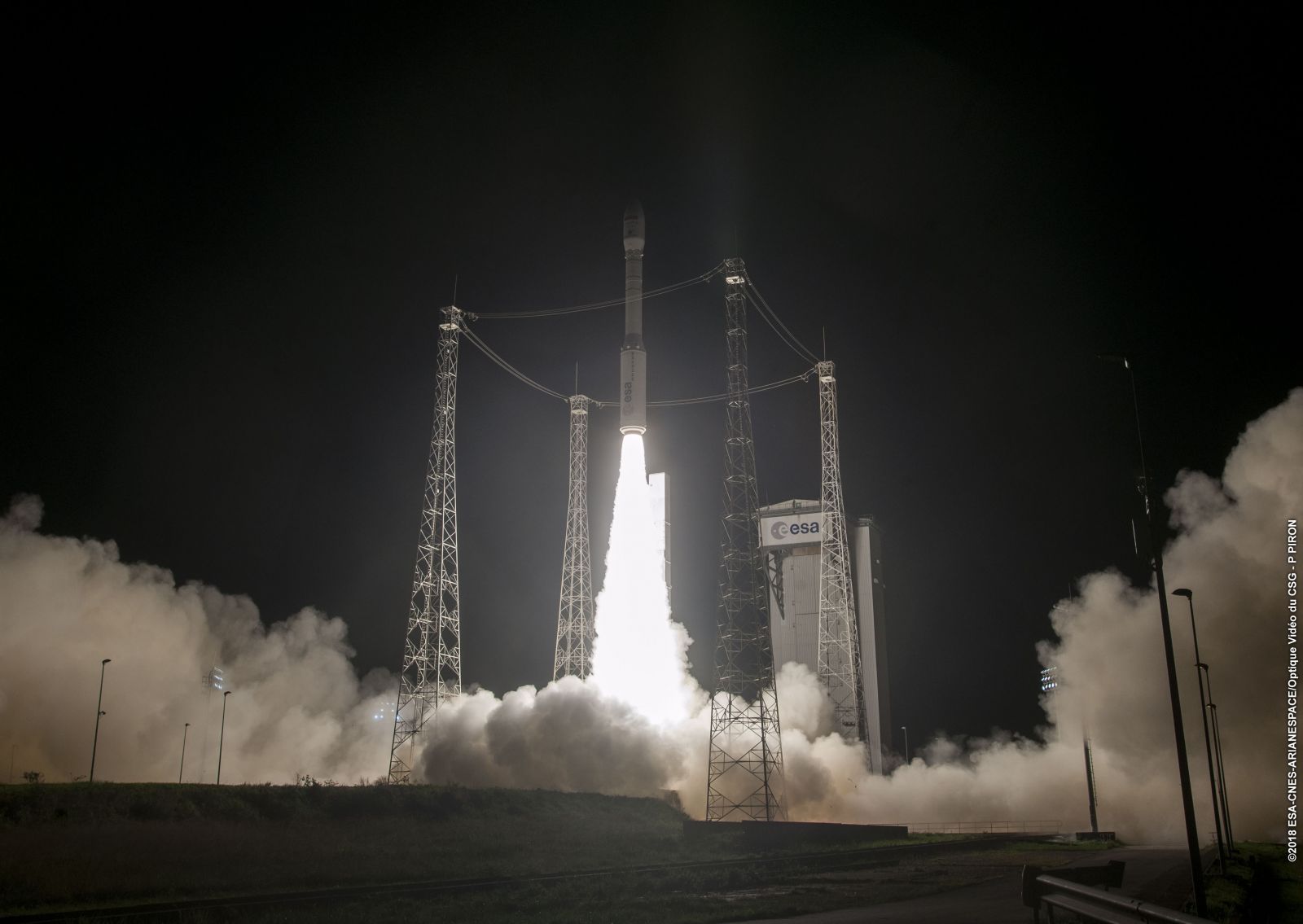 Pre-launch preparations for the VV13 mission were initiated in early October when Mohammed VI-B was shipped to French Guiana. Afterward, the satellite passed its initial checks and was ready for fueling operations, which was scheduled for Oct. 24-25.

Meanwhile, engineers started the assembly of the Vega rocket on Oct. 10, finishing nine days later. The fully-integrated launch vehicle was then ready for a synthesis control test that was conducted Oct. 30. 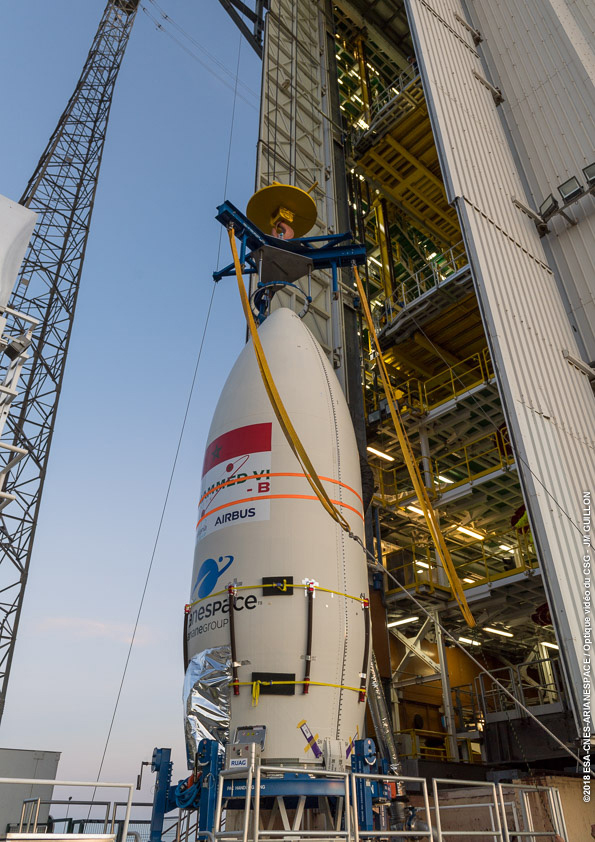 The upper composite with the Mohammed VI–B satellite is hoisted to the upper levels of Vega’s mobile gantry. Photo Credit: Arianespace

The satellite was attached to the payload adapter on Oct. 29 and encapsulated in a payload fairing on Nov. 6, forming the upper composite of the rocket. The uppermost part of Vega was installed on the integrated lower stages of the launcher on Nov. 9, which commenced the final phase of the pre-launch campaign.

Fueling of the rocket started on Nov. 12, which was followed by arming of the launch vehicle and its fairing. After finishing these operations, the mission passed its launch readiness review (RAL) on Nov. 19. The completed RAL cleared the way final launch countdown, which began 9 hours, 10 minutes before liftoff.

Igniting its P80 engine, Vega soared skyward, being powered by the first stage for 1 minute, 54 seconds. Immediately after the separation of the first stage, control of the flight was taken over by the Zefiro 23 second stage rocket motor, which burned its engine for 1 minute, 43 seconds until it was detached 3 minutes, 38 seconds into the flight.

Twelve seconds later, Vega’s Zefiro 9 third stage was ignited and continued to rocket’s ascent. Zefiro 9 powered the mission for some 2 minutes, 39 seconds, and during this phase of the flight the protective payload fairing was jettisoned at T-plus 3 minutes, 55 seconds.

The third stage separated from the launch vehicle at T-plus 6 minutes, 29 seconds. Next, the longest part of the mission started, during which the rocket’s AVUM upper stage performed two engine burns, first started at T-plus 8 minutes, while the second began at approximately 52 minutes into the flight. These burns were needed to deploy the satellite into a Sun-synchronous orbit (SSO), 55 minutes, 21 seconds after launch.

Developed by Thales Alenia Space as prime contractor and Airbus Defence and Space as co-prime, Mohammed VI-B is an Earth observation satellite based on the AstroSat-1000 platform. The spacecraft weighs around 1.1 metric tons and features three deployable solar arrays.

Morocco plans to use Mohammed VI-B for mapping and land surveying activities, regional development, as well as agricultural monitoring. Moreover, the satellite is expected to help this country in such areas as the prevention and management of natural disasters, monitoring changes in the environment and desertification, as well as border and coastal surveillance.

In space, Mohammed VI-B joins Mohammed VI-A, which was placed in orbit on Nov. 7, 2017. Complementing each other, the satellites should enable a faster coverage of zones of interests. 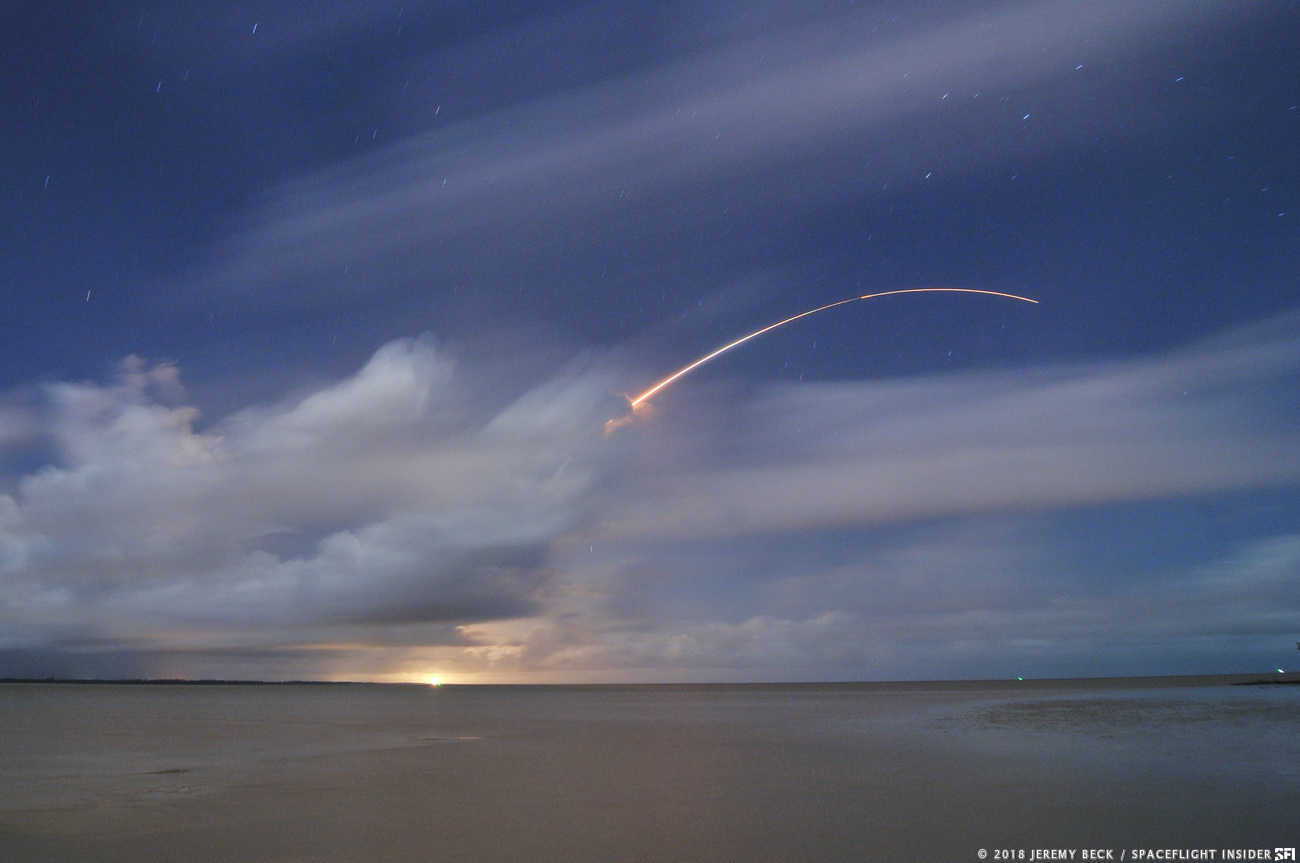 The Vega rocket that was used for Tuesday’s flight is a single-body launcher with three solid-propellant stages and a liquid-propellant upper module for attitude and orbit control, and satellite release.

This series of launch vehicles is commonly used for many scientific and Earth observation missions. Vega’s maiden flight took place in February 2012 and VV13 is the 13th orbital mission of this booster as the number suggests.