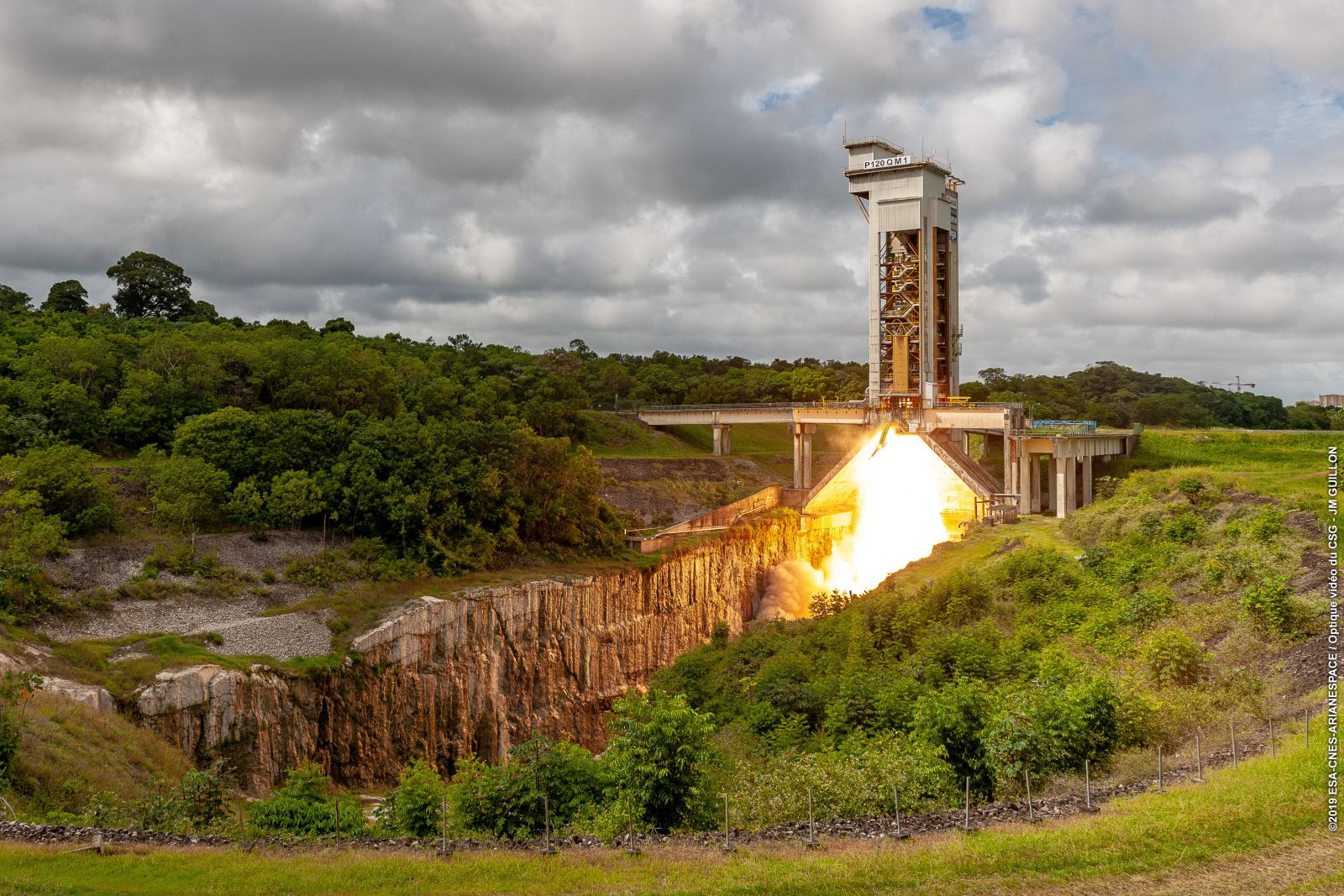 A test article of the P120C rocket motor was tested in French Guiana on Monday, Jan. 28, 2019. Photo Credit: ESA/CNES

The vast jungles of French Guiana echoed with the sounds of a different type of thunder other than the natural kind on Monday Jan. 28. An artificial roar was generated by a solid rocket motor that is planned for use on the Vega-C rocket Arianespace is developing to launch upcoming missions.

Monday’s test used a qualification model of the P120C solid-fuel motor and lasted for about two minutes and 15 seconds. The motor measures an estimated 43 feet (13.5 meters) in length and 11 feet (3.4 meters) in diameter.

Packed with 147 tons ( 142 tonnes) of solid propellant, the test article was lit and produced a torrent of flame as it worked to validate the design under the cloudy skies above the jungle.

The P120C would be used during the first part of Vega-C’s flight, providing the thrust needed to send the mission’s payload to the desired orbit. The motor is being developed as a replacement for the P80 as Vega-C’s first stage motor.

The next test of the qualification motor is currently slated to take place later this year (2019). If it successfully completes testing, the P120C could also find themselves affixed to the Ariane 6 launcher in the form of strap-on boosters to provide the additional thrust required for whatever missions they are selected for. Either two or four of these boosters would be used on the Ariane 6.

The test article of the motor helped demonstrate its capability to deliver some 4650 kN to that task. By all accounts no problems were noted during the test fire. As one might expect with sending multi-million dollar payloads into space, more reviews of the Jan. 29 data will be carried out prior to Vega-C’s first flight.

The motor’s case is one, single, component with the method of its production designed to lower the cost of flying payloads on the Vega-C. With SpaceX’s technological innovations have resulted in lower costs in terms of sending payloads to orbit (it costs, on average, about $10,000 per pound with SpaceX’s average being $2,500). SpaceX’s affordability has attracted more and more customers, This has made lowering the cost of launching satellites on Vega-C become more and more critical for Arianespace to remain competitive.

As is the case with many aerospace development and production programs, this recent test involved other organizations such as the European Space Agency, the French Space Agency (CNES) as well as Avio.

A stretch version of the P120C solid rocket motor might eventually be useful for improving the performance of the Ariane 6 and Vega launchers.

An increase in diameter of the solid-fuel motor could also be useful.

Consider the possible performance enabled by SRMs similar to the 5,000,000+ lbs of thrust from the Aerojet 260 inch diameter solid rocket motor.

A way to significantly enhance the mission performance of the Vega-C launcher for Lunar and other high delta-v space missions could be an upper stage space tug that uses a super high Isp (and thus super highly propellant efficient) solar electric propulsion system.