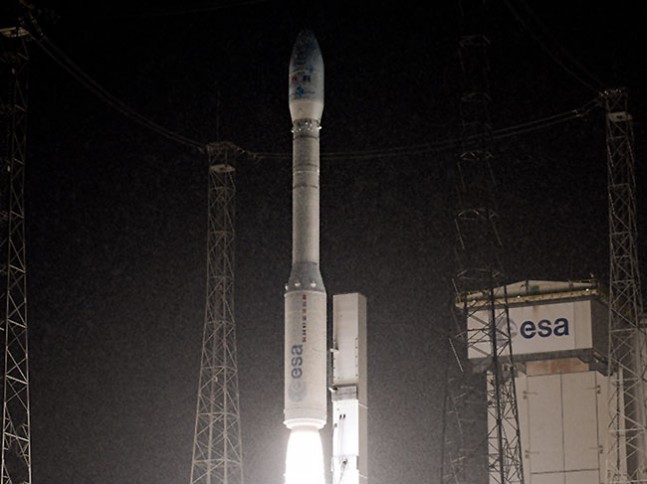 The jungles surrounding the Spaceport at Kourou, French Guiana trembled as one of Arianespace’s Vega boosters roared to fiery life and sent the Republic of Kazakhstan’s DZZ-HR spacecraft to orbit at 9:35:15 p.m. EDT (01:35:15 a.m GMT). Tonight’s launch attempt marked the second time that the launch team had worked to get the Vega off of the pad. Efforts to send the spacecraft aloft were halted last night due to issues with the launch vehicle’s umbilical systems.

Vega is a single-body launch vehicle without any strap-on boosters. It has four stages, the first three are fueled by solid propellant. The breakdown of the stages is as such: P80 first stage, Zefiro 23 second stage, Zefiro 9 third stage. While the first three stages use a solid fuel – the third “AVUM” stage – is a different animal.

The fourth stage, known as the Attitude Vernier Upper Module (AVUM), uses a RD-689 rocket engine, produced by the Yuzhnoye Design Bureau (which is located in the Ukraine), and is fueled by burning pressure-fed unsymmetrical dimethylhydrazine (UDMH) and nitrogen tetroxide. The first three stages were only active for a total of six minutes and 14 seconds. Staging occurred and the segments, their work behind them, were left to fall back to Earth, more specifically the Atlantic Ocean. At this point the AVUM fourth stage had taken over – it was put to work for an additional five minutes and 39 seconds.

Vega’s P80 first stage is described as an advanced solid propellant motor. It us constructed using a filament-wound casing structure. It is about 11 meters tall and burns for about 100 seconds.

By all appearances from the reports and telemetry coming into the Jupiter Control Center in Kourou – tonight’s flight was a success.

Vega, is the smallest and weakest of the boosters that Arianespace fields. It supplements the medium-lift capabilities of the Soyuz and heavy-lift Ariane launch vehicles. It was developed by the European Space Agency (ESA) as well as Italy’s ASI space agency and the industrial prime contractor ELV SpA.

The first flight of Vega was a qualification mission which was launched in February of 2012. The booster carried the LARES laser reflectivity satellite, the ALMASat-1 technology microsatellite demonstrator and seven CubeSats. A little more than a year later, in May 2013, a second Vega was launched with the Proba-V, VNREDSat-1 and ESTCube-1 satellites.

DZZ-HR is a high-resolution Earth observation spacecraft which will aid in the use of resources as well as disaster relief and other purposes. It will conduct its efforts from a Sun-synchronous orbit.

DZZ-HR is a 900 kg class satellite which was produced by Airbus Defense and Space for the government of the Republic of Kazakhstan. Once on-orbit, the spacecraft will provide high-quality panchromatic and multispectral imagery which will be, as mentioned, for an array of purposes which also include the management of natural resources, monitoring of the environmental monitoring.