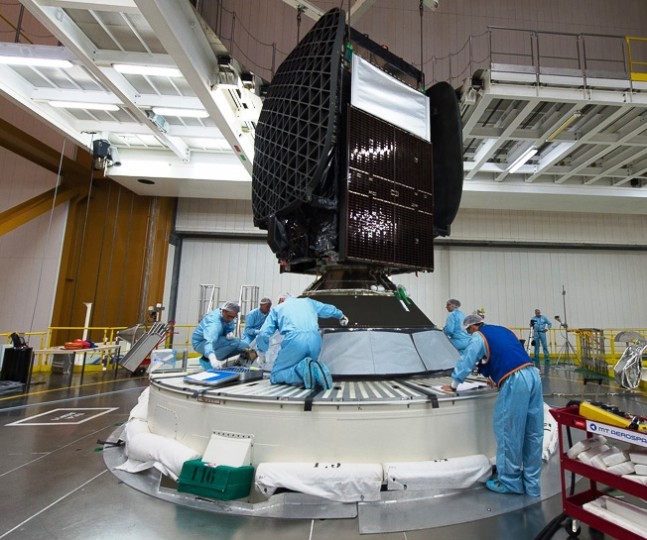 Europe-based Arianespace is preparing to launch an Ariane 5 booster with the DirecTV-15 and
Sky Mexico-1 satellites on Wednesday, May 27. Photo Credit: Arianespace

The Ariane 5 launch vehicle completed the launch readiness review (RAL) on Friday, May 22, and it now awaits the rollout on Tuesday. RAL confirmed the “go” status of the rocket, as well as the spaceport’s infrastructure and the downrange tracking station network. The two spacecraft, encapsulated in their payload fairing, are moved into position above the Ariane 5 booster in preparation for this week’s launch. Photo Credit: Arianespace

Seven seconds after the ignition of the main stage cryogenic engine at T-0, the two solid-propellant boosters will be ignited, enabling liftoff. The launcher will first climb vertically for 6 seconds, and then it will rotate toward the East.

The fairing protecting the DirecTV-15 and Sky Mexico-1 satellites will be jettisoned at T+191 seconds, about 48 seconds after the launcher’s boosters are jettisoned at approximately at T+143 seconds.

Once this first part of the flight is completed, the onboard computers will optimize the trajectory in real time, minimizing propellant consumption to bring the launcher first to the intermediate orbit targeted at the end of the main stage propulsion phase, and then the final orbit at the end of the flight of the cryogenic upper stage.

The main stage is expected to fall back in the Gulf of Guinea, off the coast of Africa in the Atlantic Ocean.

DirecTV-15, United States’ most powerful television broadcasting satellite, is based on the Eurostar E3000 platform, and has a mass of 6,200 kg. It’s the 100th geostationary telecommunications satellite built by Airbus. The first DirectTV satellite was launched on Dec. 17, 1993.

“DirecTV-15 is not just the 100th telecommunications satellite we have built for geostationary orbit – it is also the most powerful television broadcasting satellite ever built in Europe, the most powerful used in the USA and our 8th satellite to use electric propulsion for station-keeping,” said François Auque, Head of Airbus’ Space Systems. “This launch once more highlights the expertise and competitiveness of Airbus Defence and Space as the prime contractor for both the DirecTV-15 satellite and the Ariane 5 launcher.” Sky Mexico-1 is packed into its container for transport to the Dulles International Airport. Image Credit: Orbital ATK

Airbus currently manages the entire industrial supply chain, from the manufacture of equipment and stages to the complete integration of the Ariane 5 launcher in French Guiana, in line with the customer’s specifications.

Sky Mexico-1 uses a GEOStar-2.4E platform, and has a mass of 3,000 kg. It’s the 26th satellite built by Orbital ATK to be launched by Arianespace.

The company produced the satellite in just 20 months, four months ahead of the original baseline schedule.

Our ability to deliver this satellite well ahead of schedule demonstrates the effective, experienced performance of our Orbital ATK team. We take great pride in the short cycle manufacturing process that results in high quality and reliable satellites for our customers,” said Chris Richmond, Vice President and General Manager of Orbital ATK’s commercial satellite division.

The lifespan of both satellites is approximately 15 years.

Wednesday’s liftoff will be the 223rd Arianespace launch and the 79th launch of an Ariane 5.