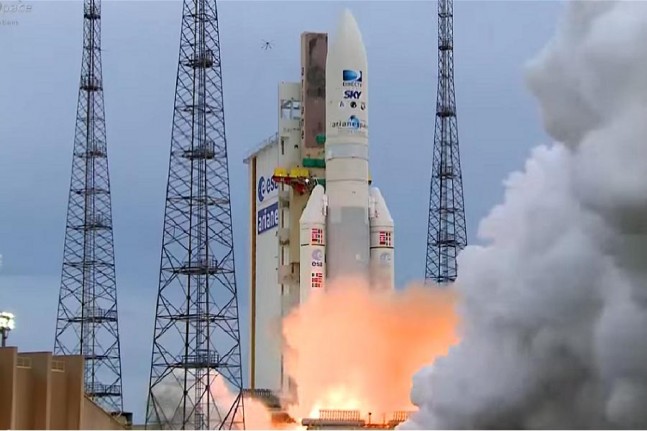 An Ariane 5 rocket successfully launched two communications satellites on Wednesday, May 27, 2015, at 6:16 p.m. local time (5:16 p.m. EST) from Ariane Launch Complex No. 3 (ELA 3) at the Spaceport located in Kourou, French Guiana. This marked the 223rd Arianespace mission to date and was designated Ariane Flight VA223. The booster delivered both the DirecTV-15 and Sky Mexico-1 satellites into orbit. Ariane 5 is shown in the Spaceport’s ELA-3 launch zone prior to its liftoff on Flight VA223 with the DirecTV-15 and SKY México-1 satellites. Photo Credit: ESA/CNES/Arianespace

The Ariane 5 ECA (Cryogenic Evolution type A) – the most powerful version in the Ariane 5 family of rockets – was employed for this flight, a vehicle that is an improved version of the generic Ariane 5 launcher.

The fairing protecting the satellites was jettisoned at T+191 seconds, about 48 seconds after the launch vehicle’s boosters were jettisoned at approximately at T+143 seconds.

DirecTV-15, a U.S. television broadcasting satellite, is based on the Eurostar E3000 platform, and has a mass of 13,669 lbs (6,200 kg). It’s the 100th geostationary telecommunications satellite built by Airbus. The first DirectTV satellite was launched on Dec. 17, 1993.

Airbus currently manages the entire industrial supply chain, from the manufacture of equipment and stages to the complete integration of the Ariane 5 launcher in French Guiana, in line with the customer’s specifications.

“The early indications from our initial checkout and testing process show that the satellite is performing well,” said Chris Richmond, Vice President and General Manager of Orbital ATK’s commercial satellite division. “SKYM-1 marks the first satellite we built for DIRECTV and represents what we hope is the start of a valued relationship for years to come. This mission demonstrates our continued ability to deliver high-quality, reliable satellites to our customers on time and demonstrates that Orbital ATK truly is a partner you can count on.” The spacecraft, encapsulated in their payload fairing are moved into position above the Ariane 5 booster in preparation for this week’s launch. Photo Credit: Arianespace

Sky Mexico-1 uses a GEOStar-2.4E platform, and has a mass of 3,000 kg. It’s the 26th satellite built by Orbital ATK that was launched by Arianespace.

Lift performance for the mission was approximately 9,960 kg., which included 9,200 kg. for the DirecTV-15 and SKY México-1 payloads, along with associated hardware for the launcher’s SYLDA dual-passenger dispenser system and satellite integration hardware.

The lifespan of both satellites is approximately 15 years.

The main stage is expected to fall back in the Gulf of Guinea, off the coast of Africa in the Atlantic Ocean.

“We’re proud to deliver tonight for two operators in the Americas. We appreciate your trust DirecTV and Sky Mexico!” Israël said. “Congrats to Airbus Safran Launchers, Airbus Defence and Space, and Orbital ATK! You all had a decisive role in our success.”

Flight VA223 was the fourth mission in 2015 using an Arianespace launcher, following one previous mission each with Ariane 5 (Flight VA222 with THOR 7 and SICRAL 2, carried out on Apr. 26), Soyuz (VS11 with two Galileo Full Operational Capability satellites, conducted on Mar. 27), and Vega (Flight VV04 with Europe’s IXV spaceplane, carried out on Feb. 11).

“VA223 is Arianespace’s fourth success this year… and we’re hard at work to ensure there are more to come!” Israël said.

Today’s mission, the 79th launch of an Ariane 5, continues Arianespace’s busy launch schedule in 2015, during which the company is targeting 11 mission in total – based on the availability of payloads – using its full family of the heavy-lift Ariane 5, medium-lift Soyuz and lightweight Vega launchers.