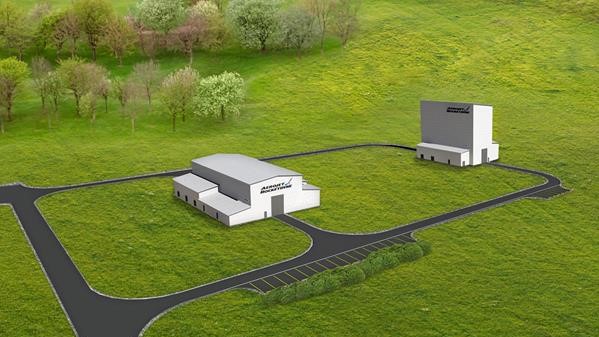 A rendering of the engineering, manufacturing and development facility in Camden, Arkansas, which is expected to open in the spring of 2020. Image Credit: Aerojet Rocketdyne

On April 25, Aerojet Rocketdyne broke ground on a 17,000-square-foot engineering, manufacturing and development facility for its solid rocket motors.

Aerojet Rocketdyne is no stranger to Arkansas, having had a presence in the state since 1979. The new facility is set to boost the south Arkansas economy by expanding its 800-person workforce to 900 employees in the state over the next three years, thanks in part to the new facility.

“The aerospace and defense industry continues to be one of the top economic drivers in Arkansas, and that wouldn’t happen without the incredible workforce and their employers, ” said Arkansas Gov. Asa Hutchinson in a statement. “We’re thrilled to see Aerojet Rocketdyne continue to grow in Camden, and we appreciate the investments they make in South Arkansas and in our nation’s security.”

Best known for producing the RS-25 engines, which were used on the Space Shuttles and will get continued use as engines powering NASA’s Space Launch System into orbit, Aerojet Rocketdyne was formed in 2013 when Aerojet and Pratt & Whitney Rocketdyne merged.

That is a top quality rendering.

Beautiful render. Those trees are huge

Hey folks, why didn’t you continue operations in FL. near key Largo?
Many years ago there was a solid fuel Aerojet General complete testing facility here, now closed off. It was so cool at night setting off a rocket engine tests where the sky would glow redish orange and could be heard like 30+ miles away ; ya thast was in the early 60’s though for a minute you couldn’t tell if it was testing or a offencive/defencive missle launch at Cuba. Those were the days.