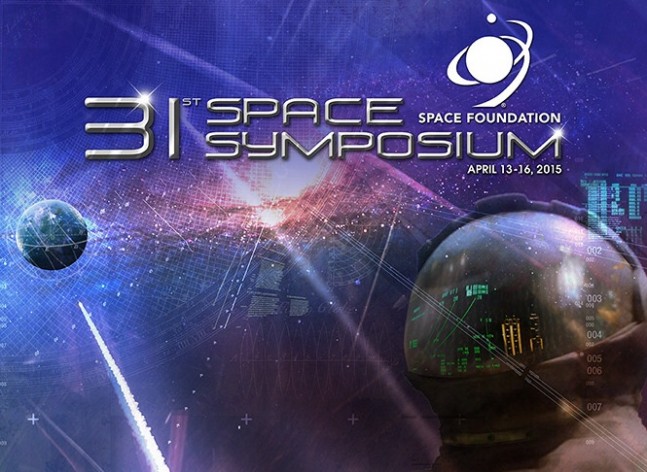 COLORADO SPRINGS, CO — Day three of the 31st Annual Space Symposium wrapped up yesterday, April 15, and SpaceFlight Insider was on hand to take in more of the action. The exhibit halls were again packed and there were many panels, media briefings, and other activities throughout the day.

Here are a couple of the more interesting highlights: James discussed the “Europa Clipper” concept, which is being targeted for launch in 2022. James explained that the current plan is to place the probe in a highly elliptical orbit around the gas giant Jupiter; it’s planned to have the spacecraft conduct 45 low-altitude flybys of Europa over a period of 2.5 years. James noted that a launch vehicle has not yet been chosen and that a flight on any vehicle other than the Space Launch System (SLS) will require a gravity assist and result in a 7.5 year transit. However, SLS was deemed a “game-changer” by representatives within the space agency who noted that the new booster will allow a 2.7 year transit, with no gravity assist. James is hoping that SLS can be used for this mission.

May spoke about SLS and stated that “technically, the rocket is coming together very well.” May explained that the primary purpose for SLS is to enable human travel beyond low Earth orbit (LEO), but that it’s also capable of flying other deep space missions, such as Europa Clipper. SLS will allow for much shorter deep space transit times. “We can get to the heliopause in ten years, instead of the thirty it took for Voyager,” explained May.

Miller discussed the Dawn probe, its visit to Vesta, and its transition to and arrival at Ceres. Dawn is the largest planetary spacecraft NASA has launched – 65 feet, tip to tip – and it’s driven by ion thrusters with solar-electric power. Miller explained that “Ceres is 25 percent liquid”, but the question remains as to whether it’s water or ice. Dawn will be entering its first “science orbit” by April 23.

Stern spoke on the New Horizons probe and its approach to Pluto. The probe began its journey on a United Launch Alliance Atlas V 551 rocket in January of 2006, and has completed 97 percent of the trip to the tiny frozen world. Stern stated that the mission has “… 111 months behind us and three months to go.” New Horizons is scheduled to make its closest approach to Pluto in July of this year (2015).

“Nobody knows what Pluto looks like,” Stern explained, “[but, on arrival], the best images will be 70 meters per pixel [and] it will take 16 months to get all the data back to Earth.”

Culbertson confirmed that the Orbital/ATK merger was completed on Feb. 9-10 of this year and that Orbital ATK is now a $4.5 billion company. Culbertson also briefly discussed the current state of government contracting and how the new, fixed-price contracting, rather than using cost-plus contracts, incentivizes commercial space companies to efficiency.

Nield revealed that there were three domestic commercial launches in 2012, 18 in 2013, and 19 in 2014. There are also currently nine FAA-licensed spaceports with many others currently in the application process. Nield also explained that the congressionally mandated moratorium on FAA regulation of commercial space is scheduled to expire in October. There are many entities pushing for an extension of the moratorium; however, the FAA is opposed to this.

Sirangelo stated that this is Sierra Nevada’s 26th year in space, and they’ve now visited seven planets, the Moon, and the Sun. He went on to briefly discuss the new uncrewed, cargo version of the Dream Chaser mini-shuttle. When asked the reason the new version of the craft incorporates deployable wings, Sirangelo stated that there are two purposes: “the folding wings allow it to fit inside a fairing, making it rocket agnostic, and they allow it to fit inside a cargo plane” for easy return after flight and landing.

Stallmer added that the mission of the Commercial Spaceflight Federation is to “promote the development of commercial human spaceflight, pursue ever higher levels of safety, and share best practices and expertise throughout the industry.” Stallmer also revealed that there are currently 52 member companies, along with seven spaceport members, and several academic institutions.

Whitesides said that Virgin Galactic was “coming along well” after last year’s SpaceShipTwo crash. He explained that construction of the next vehicle is progressing, that they hope to begin testing “before the end of the year”, and that they still have around 700 customers signed up to fly. Whitesides went on to briefly discuss LauncherOne, the company’s new air-launch system, which should be capable of delivering up to 500-pound payloads to LEO, and which is scheduled to make its first test flight by the end of 2016.

Continue to tune in to SpaceFlight Insider all week for continuing updates from the Space Symposium.

FYI – The head of FAA/AST is George Nield, not Frank Nield.