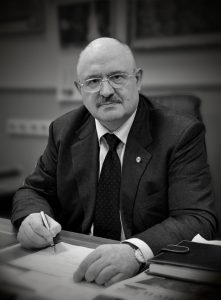 The Russian space community is mourning the tragic loss of their General Designer, with Roscosmos confirming today that Yevgeny Anatolyevich Mikrin died in hospital on May 5, 2020, at the age of 64. (editor’s note: it was initially reported that he was age 65, but General Designer Mikrin died during his 65th year.)

Born in Lebedyan, Russia on October 15, 1955, Mikrin was the General Director of S.P. Korolev Rocket and Space Corporation Energia (known previously as, NPO Energia rocket and space corporation) and is being celebrated as an outstanding scientist, designer and organizer who had made a significant contribution to the development of control systems for transported manned, cargo spacecraft, multi-module space systems, and automatic spacecraft.

While the specific cause of death was not available for confirmation at time of publishing, it was widely reported that Mikrin tested positive for the novel coronavirus (COVID-19) in the days following his recent return from Baikonur, Kazakhstan. He and Director General Rogozin had been in the region in early April, seeing off the Expedition 62/63 crew (Commander Anatoli Ivanishin, Flight Engineer Ivan Vagner and Flight Engineer Christopher Cassidy) aboard their Soyuz MS-16 spacecraft, which launched on April 9, 2020.

The statement was very clear that the loss is of great significance to many, stating that “The death of Yevgeny Anatolyevich is a great loss for the rocket and space industry of Russia and Russian science.”

Dmitry Rogozin, Director General of Roscosmos State Corporation, shared thoughts on the loss of his comrade: “With pain in my heart, I took the news of the death of Yevgeny Anatolyevich Mikrin. We have lost the general designer, comrade, friend. For several weeks, the best doctors fought for his life, all possible means and methods were used, but, unfortunately, the disease was stronger. In these difficult moments, I express my sincere condolences to the family of Yevgeny Anatolyevich. This is an irreparable loss for all of us – his friends, comrades and colleagues, with whom he worked shoulder to shoulder. He will forever remain in our memory. ” 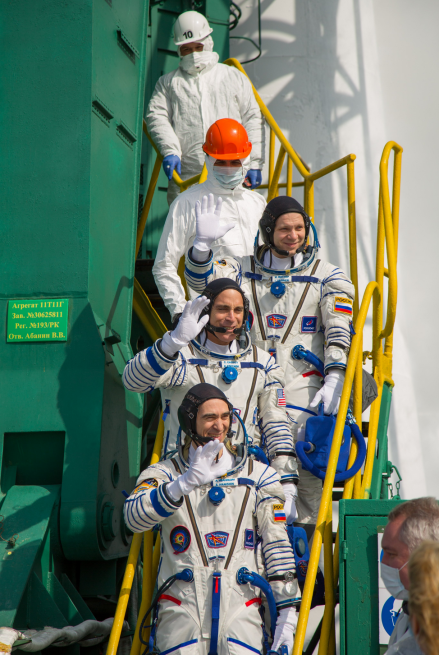 MS-16 Crew, preparing to board their spacecraft on April 9, 2020, amid precautions being taken by program workers during the global coronavirus (COVID-19) pandemic. Credit: Roscosmos

There have been no indications or symptoms of coronavirus-like illness reported by NASA as it pertains the international crew of three currently flying aboard the ISS, and preparations are well underway to launch another two people from Florida, as part of the SpaceX Demo-2 mission. Launch of the Crew Dragon with NASA astronauts Douglas Hurley and Robert Behnken is currently scheduled for May 27, 2020.

Mikrin’s official biography on the Energia website celebrates his many accomplishments, following along as he rose through the ranks to become General Designer.

A small cross section of what is listed includes the following:

Developed during the period of 1983 through 1988, under the direction and with immediate participation of E.A. Mikrin, was software for controlling the combined propulsion system of the reusable Buran orbiter of the multipurpose space transportation system Energia-Buran. From 1993 to 2000 he was one of the key participants in the activities under the International Space Station (ISS) program, made critical decisions on the development of methodology for the onboard control system and its software for the Russian Segment of the ISS, the effectiveness of which has been proven by many years of successful operation of the ISS.

He organized efficient work of the partners to develop control systems and instruments for the European Automated Transfer Vehicle ATV (2008–2014), information and control systems for training facilities at training centers for cosmonauts and astronauts at Star City (Russia), Houston (USA), Cologne (Germany) and Toulouse (France).

For achievements in his work and scientific activities, Y.A. Mikrin was awarded the medal of the Order for Merit to the Fatherland, Class II (2001), and the honorary title Honored Scientist of the Russian Federation (2010). He is a winner of the stipend from the President of Russia for significant contribution to the development of the defense industry complex of the Russian Federation (2004-2005), B.N. Petrov Prize from the Russian Academy of Sciences (2007), the Russian Federation Government Prize for science and technology (2009), K.E. Tsiolkovsky Prize from the Russian Academy of Sciences (2014), RF Government Prize for education (2014), he is an honorary citizen of the towns of Lebedyan, Lipetsk region, and Korolev, Moscow region, and he was also awarded a Thank You Badge from the governor of the Moscow region.