Owen K. Garriott passed away on Monday, April 15 at the age of 88. Photo Credit: NASA / JSC

Skylab and Space Shuttle veteran Owen K. Garriott died Monday at age 88 in his home in Huntsville Alabama. The news was released by Garriott’s family to the Association of Space Explorers.

Condolences poured in from colleagues including astronaut Buzz Aldrin who tweeted, “Astronaut Owen Garriott was a good friend and an incredible astronaut. I have a great sadness as I learn of his passing today. Godspeed Owen.” 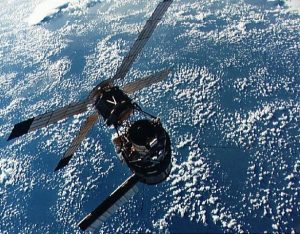 Garriott served as the Science Pilot on the 1973 Skylab 3 mission. Photo Credit: NASA

“Saddened to learn the passing of former Astronaut Owen Garriott who pioneered long-duration spaceflight aboard #Skylab. My thoughts are with @RichardGarriott and family.” posted Scott Kelly.

Garriott was born on Nov. 22, 1930, in Enid, Oklahoma. He graduated from Enid High School and later earned his bachelor of science degree in electrical engineering from the University of Oklahoma in 1953. After serving in the U.S Navy, he attended Stanford University where he received his masters of science degree in 1957, followed by his doctorate in 1960. From there he taught electronics and physics at the school until he was selected as a NASA scientist-astronaut in 1965.
Garriott spent a total of 1,427 hours aboard the Skylab 3 mission from July 28, to Sept 25 of 1973 along with his two crew mates, Alan Bean and Jack Lousma.
During Skylab 3 he conducted three separate spacewalks spending nearly 14 hours outside of the station. On his first spacewalk, he and Lousma installed the twin pole sunshade to replace the damaged micrometeorite shield.
As the Science Pilot of Skylab 3, he also conducted major experiments in science and medicine during the mission including studies regarding human physiological adaptation and re-adaptation to space flight.
In November of 1983, Garriott launched into space again aboard STS-9 (on Columbia). STS-9 was the first shuttle flight to include the Spacelab 1 module.
Garriott resigned from NASA in 1986. With his time with the agency complete, he went on to work for a variety of aerospace companies.
In 2015, while at Leonardo’s Children’s Museum (a facility he co-founded with his former wife Helen Walker) Garriott was asked if space was still important. He replied, “If you ask kids here (at Leonardo’s) see what they say, you will see there is as much enthusiasm as there ever was.”

I remember the summer of 1979 when Skylab deorbited. It seems like a long time ago. I’m sure Mr. Garriot would be pleased to see how things are shaping up for the future of manned space flight. RIP good sir.