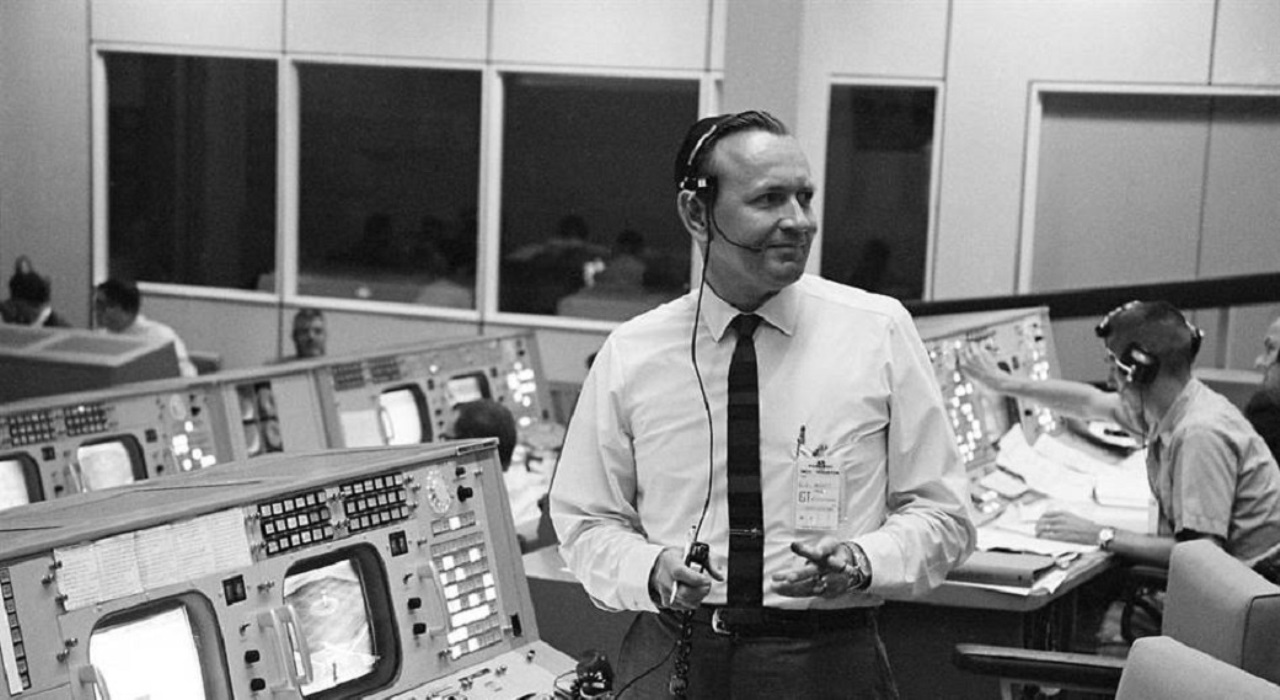 Chris Kraft lights a cigar at Johnson Space Center’s Mission Control room – a concept he helped pioneer. Kraft passed away on Monday, July 22, 2019 at the age of 95. Photo Credit: NASA

JOHNSON SPACE CENTER, Texas — Although his name isn’t as well-known as Alan Shepard, John Glenn or Neil Armstrong, without the efforts of Christopher C. Kraft, NASA would likely never have left orbit let alone sent men to the Moon. Kraft passed away on Monday, July 22 at the age of 95.

Kraft was born on Feb. 28, 1924 on the shores of the Chesapeake Bay in Phoebus, Virginia. He is best known for his sound judgement, common sense and strong leadership in the early years of the manned spaceflight program in the United States. After graduating from high school he continued his studies at Virginia Tech and it was here as the president of the corps of cadets that he credited for his leadership training. Among the lessons learned there was that, “It’s not fatal to change your mind”, stating it was a lesson that would come back to me many times in my career and that it was part of his core values.

At 20 years old, with a degree in aeronautic engineering he began work at the National Advisory Committee for Aeronautics (NACA) at Langley Memorial Aeronautical Laboratory just a few miles from his childhood home. Under the leadership of Robert Gilruth and Hewitt Phillips he made significant contributions to flight research. Among the projects he worked on were the P-51H and the Vought F8U Crusader. 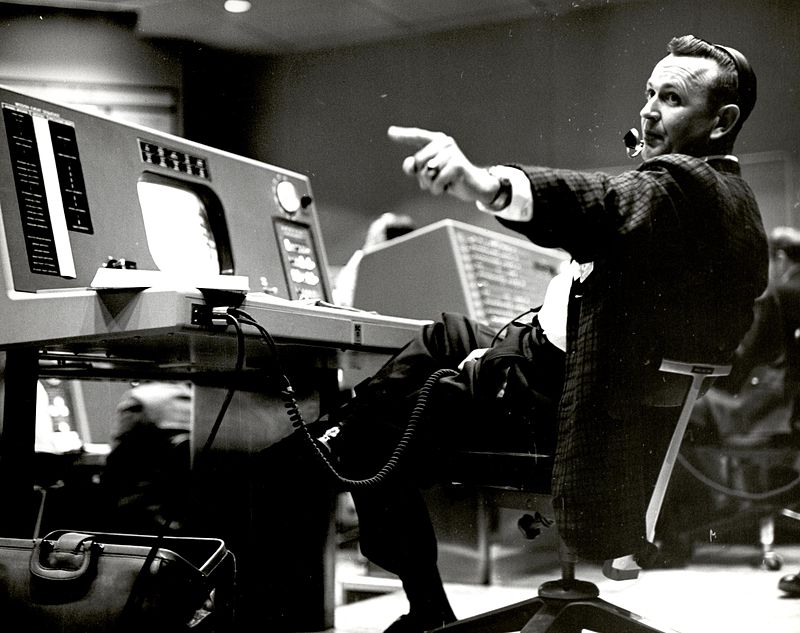 Kraft was known for his blunt, no-nonsense form of leadership. Photo Credit: NASA

On Nov. 5, 1958 Kraft was selected as one the original 35 members of the NASA Space Task Group, where he would see the focus of his work shift from research and engineering to administration and leadership as NASA’s first Flight Director. As one of the pioneers of manned space flight he developed and oversaw all mission procedures and operational issues as well as created the concept of Mission Control.

Among the concepts that were critical to the success of the manned spaceflight program were a worldwide communications system, computer systems, radar tracking, recovery procedures and mission rules. His leadership role as flight director was suggested by his control room name – “Flight”.

Between 1961 and 1966 he was the flight director for all Mercury and many Gemini missions, and was charged with the task of creating the Manned Spacecraft Center in Houston now known as the Johnson Space Center and the Mission Control Center bears his name. Among the historic flights during this period were the first sub-orbital and orbital flights with Project Mercury as well as the first space walk and first rendezvous with Project Gemini. Following the Gemini 6 and 7 missions he began to turn his attention to Apollo.

In 1970, he became the MSC Deputy Director, and was responsible for Apollo mission planning and training. In 1972 he became the Director of the Johnson Space Center and served in the capacity until 1982. His leadership was critical for the remaining Apollo missions, Skylab, Apollo-Soyuz and the first Space Shuttle flights.

He has been busy during retirement. In 2002 he published the New York Times best seller “Flight: My Life in Mission Control”. He has served on the Board of Visitors at Virginia Tech, served as Director at Large of the Houston Chamber of Commerce, and worked as a consultant for such companies as IBM and Rockwell International.

Dr. Kraft was married to the former Betty Anne Turnbull of Hampton, Virginia, whom he met in High School. They have two children: a son, Gordon, who lives in San Francisco, California, and a daughter, KristiAnne of Houston, Texas. Dr. and Mrs. Kraft reside in Clear Lake in Houston, Texas. 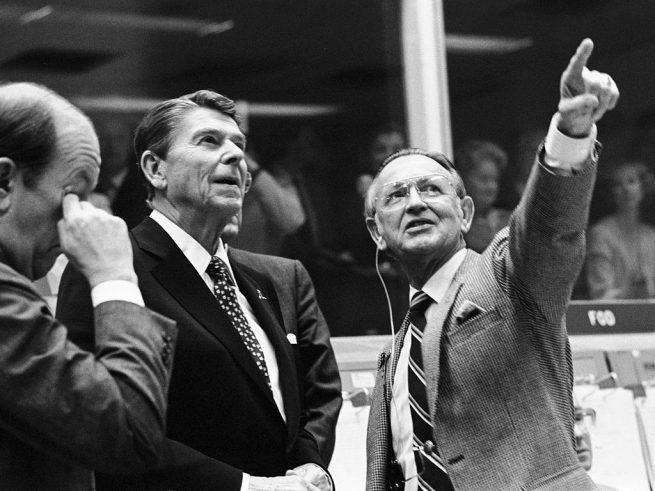 As soon as word of his passing was released, numerous officials and luminaries within the space industry expressed their thoughts on his contributions to the goal of space exploration:

“It took hundreds of thousands of people to put astronauts on the moon, but there are a small handful without whom NASA as we know it doesn’t happen,” David Hitt, who wrote about Kraft in the two books of space history he co-authored, Homesteading Space and Bold They Rise told SpaceFlight Insider. “Without question, Chris Kraft was one of the essentials. The idea of Mission Control is an indelible part of the agency, and Kraft is the genesis of Mission Control as we know it. And even beyond that, he shaped Johnson Space Center and NASA in ways that history will never fully be able to record,”

“Chris was flight director at some of the most iconic moments of space history, as humans first orbited the Earth and stepped outside of an orbiting spacecraft. For his work, he was awarded the NASA Outstanding Leadership Medal by President John F. Kennedy. Chris later led the Johnson Space Center, known then as the Manned Spacecraft Center, as our human exploration work reached for new heights following the Apollo Program. We stand on his shoulders as we reach deeper into the solar system, and he will always be with us on those journeys.”

One of the organization’s at the forefront of the U.S.’ efforts to restore the nation’s ability to send people beyond low-Earth orbit, the Coalition for Deep Space Exploration also noted Kraft’s enduring legacy:

“It is with great fondness and deep appreciation that we recognize the life and mourn the passing of Christopher Columbus Kraft, Jr.,” said Dr. Mary Lynne Dittmar, president and CEO of the Coalition. “He led a team of young pioneers to places that no one had gone before and, in the process, inspired and united the people of the world. He defined mission control and the way we go about exploring space, today, and laying the foundation for many missions to come. He was a great leader, a great American and an Explorer for the ages. We can only try to follow in his giant footsteps as we focus, once again, on reaching out beyond our world.”

“Chris Kraft was the recognized father of human spaceflight mission control,” said Shelton. “As a space shuttle flight controller in the early 1980s, I knew we were working under the disciplines developed by him. His legacy is one of excellence and mission success while facing overwhelming odds.”

Much of this remembrance of Kraft’s many accomplishments come from his autobiography: Flight: My Life in Mission Control

One of the best articles on Mr Kraft’s passing that I have read (thanks Steve)…I particularly love that quote about leadership…”It’s not fatal to change your mind”…too many people stick stubbornly to their ideas when the evidence contradicts them…I am pretty sure that philosophy was key to the success of HSF in the early days.

Thank you Anders. I really appreciate you reading the article and commenting. I also agree with you 100 percent about leadership.