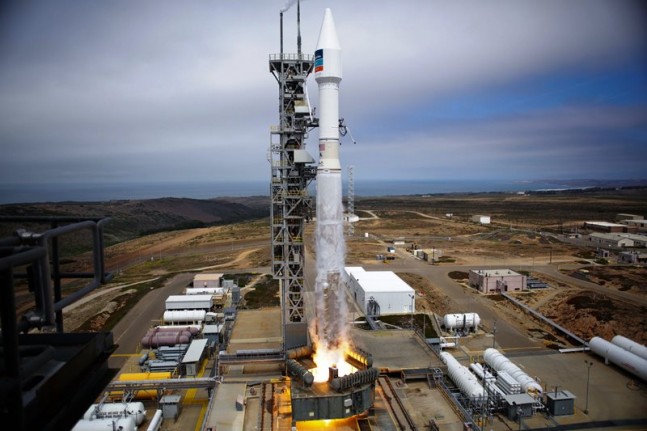 “Congratulations to our commercial mission partners Lockheed Martin Commercial Launch Services and Digital Globe for today’s spectacular launch of the Atlas V carrying the WorldView-3 satellite,” said Jim Sponnick, ULA vice president, Atlas and Delta Programs. “The team’s dedication to mission success, one launch at a time, brought us to today’s successful launch, delivering WorldView-3 to provide the next generation in earth imaging capabilities for DigitalGlobe.” It was a cloudy day over Vandenberg AFB, and the day before, just a 40 percent chance of favorable weather conditions had been predicted. The concern was the presence of clouds below 2,000 feet. Fifteen minutes prior launch, the weather was declared “green for launch” with a zero percent chance of a weather violation.

Toward the end of a planned 20-minute hold, the readiness poll was conducted, during which 29 engineers and managers were polled for the system status check. The readiness poll includes everything from hydraulics, electrical systems and propellant to the pad water deluge system, and for each item, “Go!” was declared. The launch team gave the “go for launch” and after another minute and a half, the countdown continued from T-4 minutes.

At T-3 seconds, the Russian-made RD-180 engine by NPO Energomash roared to life, and seconds later the rocket lifted off the pad. Successful pitch, yaw and roll maneuvers were performed soon after, commanded by the Centaur avionics, to put the rocket on the correct path.

The vehicle made it through maximum dynamic pressure, or Max-q, the point of the flight where the most stress is applied to the airframe and therefore the riskiest part of the flight after liftoff.

A little after 4 minutes into the flight, the RD-180 engine shut down and stage separation occurred. The Centaur upper stage took over at this point, propelled by an Aerojet Rocketdyne RL10A engine. The payload fairing was jettisoned at around T+5 minutes, and the Centaur continued to carry the satellite towards its orbit. Besides the Centaur’s engine, Aerojet Rocketdyne also provided a dozen attitude control thrusters and six helium pressurization tanks, making this the fifth launch they have supported in the last six weeks.

“The tempo of successful launches into orbit is testament to the dependability and reliability of our propulsion systems, and we look forward to working with our customers to ensure uninterrupted access to space,” said Steve Bouley, vice president of Space Launch Systems at Aerojet Rocketdyne.

The RL10A engine burned for 11 minutes and 43 seconds before MECO-1, main engine cutoff for the Centaur stage, occurred at about T+16 minutes. The vehicle coasted for just over three minutes before second stage separation occurred and WorldView-3 was released. The WorldView-3 spacecraft can be seen here – just prior to being ensconced in the Atlas’ payload fairing. Photo Credit: ULA

This was the sixth launch of a DigitalGlobe satellite, but the first to launch atop an Atlas rocket. The 401 designation of the specific Atlas V configuration that was used indicates that it has a 4-meter-diameter payload fairing, no solid rocket boosters, and a single RL10A engine on the Centaur stage.

WorldView-3, built by Ball Aerospace, is a modified version of WorldView-2 and is the first multi-payload, super-spectral, high-resolution commercial satellite for earth observations and advanced geospatial solutions.

It will be operating at an altitude of 383 miles (617 kilometers), and will be able to see features that are only about a foot long. According to DigitalGlobe’s blog, “that is the same as the distance between Southern California’s Hollywood sign and the Golden Gate Bridge in San Francisco,” and “if the imagery were located at the Hollywood sign, users would be able to count all of the people on the Golden Gate Bridge.”

The original WorldView satellite, WorldView-1, launched in September of 2007 and continues to operate at an altitude of about 308 miles (496 kilometers ) with a revisit time of 1.7 days. It’s capable of collecting more than 579,000 square miles (1.5 million square kilometers) of imagery per day.

WorldView-2, the first high-resolution 8-band multispectral commercial satellite, launched two years later in October of 2009. It operates at an altitude of some 478 miles (770 kilometers) with an average revisit time of 1.1 days, collecting up to 463,000 square miles (1.2 million square kilometers) worth of imagery per day.

Now, almost five years after the last WorldView launch, WorldView-3 is in orbit with the shorter revisit time of less than one day, able to collect up to 230,000 square miles (680,000 square kilometers) of imagery daily. Each WorldView satellite uses more sensors and captures images with better resolution than the previous one, so though WorldView-3 collects images from less total area each day, it is still collecting a vast quantity of new data.

To compare, WorldView-2 is only capable of providing 46-centimeter panchromatic resolution and has a 184-centimeter multispectral sensor. The CAVIS instrument is also new, as it is the first atmospheric sounder on a DigitalGlobe satellite. According to Ball Aerospace’s website, it “will enable WorldView-3 to collect scientific data based on ground reflection by correcting images for atmospheric interference.” The “401” in the Atlas V’s designation – stands for the four meter fairing (seen here) that the rocket uses to shield the spacecraft on ascent, that it has no solid rocket boosters and a single Centaur engine in its upper stage. Photo Credit: ULA

It is only because of a recent government decision that the extremely high-resolution images from WorldView-3 will be available for commercial purposes. Before June of this year, the U.S. government restricted satellite companies from selling images to commercial or foreign organizations if any features smaller than 50 centimeters were visible, for the sake of national security. Now, however, DigitalGlobe has the option to sell the 31-centimeter-resolution images to companies like Google, for applications like Google Earth, or Microsoft, after the satellite has been operational for six months.

The decision also allowed the company to immediately begin selling better images from their existing satellites. Without this change, WorldView-3’s best images would have been reserved for just one of DigitalGlobe’s major customers, the U.S. government.

Now that WorldView-3 is in orbit, it is expected to last for about seven and a half years, during which it will have applications like “civil government mapping, land-use planning, disaster relief, exploration, defense and intelligence, and visualization and simulation environments,” according to the Ball Aerospace website.

ULA has five more launches left on the company’s manifest for 2014. The next one scheduled is the CLIO mission, a highly classified satellite that was apparently ordered by a U.S. government agency, set for September 26 from Cape Canaveral. Like the WorldView-3 launch, CLIO will be sent up on another Atlas V 401 rocket.