With recent electrical issue resolved, Curiosity rover back in action 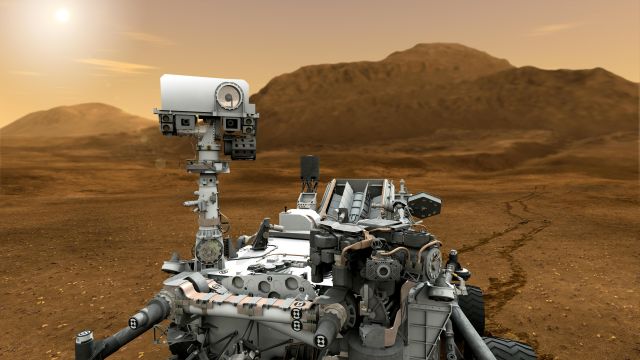 Bad news travels fast as they say, but apparently good news do too. Such was the case with NASA’s Mars Science Laboratory rover Curiosity. At the same time we were reporting here on SpaceFlight Insider on the recent electrical issue that had left the rover immobilized a few days earlier, NASA was well on its way to resuming operations on the intrepid robotic explorer. A self-portrait of Curiosity’s main deck, The Multi-Mission Radioisotope Thermoelectric Generator, visible at the center, was found to be the source of the recent drop in Curiosity’s power-to-chassis voltage. Image Credit: NASA/JPL-Caltech

The space agency announced Nov. 25, that it had resumed all of the rover’s activities following a voltage drop which occurred last week. That drop in power from 11 to 4 volts, had been observed between Curiosity’s chassis and its 32-volt power supply, which is responsible for delivering electrical power to all of the rover’s different parts and equipment. Engineers on the ground suspected the likely cause was what is known as a ‘soft short’, where electricity leaks from a conductive material to a less conductive one.

Although the rover comes with a design feature called a ‘floating bus’, which allows the rover to function even with low voltage, engineers wanted to be safe. Soft shorts are relatively harmless and are restricted to a certain area of an electrical distribution system, but for Curiosity every such short would leave the rover more vulnerable to similar events in the future. It could potentially lead to ‘hard’ shorts, which would endanger the entire mission. With that in mind, engineers halted all of Curiosity’s operations, in order to find out the root cause of the problem.

They were helped in their quest by the rover’s quick automated response as well. When Curiosity’s on board software detected the power loss, it started monitoring and recording all the relevant electrical readings and variables in the much faster rate of eight times per second, instead of the normal once per minute. It then started transmitting that data back to Earth, helping engineers on the ground have a more detailed view of the situation. The Curiosity rover’s return to operations after the recent electrical issue, came with this photo. It was acquired by the MAHLI camera that is mounted on the rover’s robotic arm, on the mission’s Sol 463 (24 November 2013). Some expected wear and tear on the middle wheel is visible. Image Credit: NASA/JPL-Caltech

“We made a list of potential causes, and then determined which we could cross off the list, one by one”, said Rob Zimmerman, electrical engineer of the MSL mission at NASA’s Jet Propulsion Laboratory. The culprit was found eventually to be a soft short that had occurred on Curiosity’s Multi-Mission Radioisotope Thermoelectric Generator, or “MMRTG”. MMRTG is a Radioisotope Thermoelectric Generator (or “RTG”), that utilizes the decay of Plutonium-238 oxide to produce electricity.

Identifying Curiosity’s RTG as the source of the soft short, was a cause for relief too. Soft shorts and space-bound RTGs are no strangers to one another. The RTGs onboard the Cassini spacecraft for instance (which is currently exploring Saturn), have faced similar events in the past. Despite this, Cassini is still going strong after 16 full years in space, without any major problems.

After the analysis work was over, the engineers received data from Curiosity, indicating that the power-to chassis voltage had returned to its pre-drop 11 volts rate. They also commanded Curiosity to perform some diagnostics during the following days, powering up some backup equipment, to make sure that power delivery from the RTG would not lead to any other soft shorts in certain sensors. With everything said and done, Curiosity was ready to return back to business. NASA engineers used the Mars Science Laboratory rover Curiosity’s MAHLI instrument to take images of the one-ton robot after the soft-short problem was believed to have been resolved. Photo Credit: NASA/JPL-Caltech / MSSS

It did so, by taking some photos of the rover’s underbelly and wheels with the robotic arm’s Mars Hand Lens Imager, or “MAHLI”. It also delivered some powdered rock samples to the Sample Analysis at Mars (SAM) instrument, that have been stored in its robotic arm. These samples had been collected from the inside of a rock named “Cumberland”, back in May. Curiosity had made a first analysis of the samples in the subsequent weeks through June, and stored some of the samples for later analysis. After this analysis is complete, engineers are planning to resume roving operations, with a 64-meter drive.

The rover is currently in the middle of it’s 8-km drive towards Mount Sharp, with its odometer already reading 4.3 km. Once there, Curiosity will jump-start a science investigation of the mountain’s different geologic layers, which represents a major science goal for the mission. It is hoped that close-up examination of the Mount Sharp’s different layered material accumulated over many hundreds of millions of years, will yield important discoveries about the past conditions and potential habitability of the Red Planet.