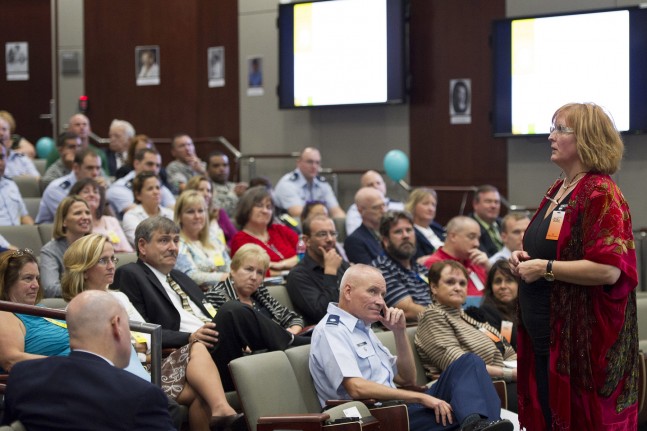 PATRICK AIR FORCE BASE, Fla – The Air Force Technical Applications Center (AFTAC ) at Patrick Air Force Base, Florida hosted their first Women In Science and Engineering (WISE) Symposium Sept. 10-11. The event was created to help encourage diversity not just in the general world of science, technology, engineering and mathematics (STEM) but in AFTAC itself.

“We looked like the cast of Mad Men,” said Col. Chris Worley, AFTAC commander, who has conducted focus groups within the Center during which he has repeatedly heard a need for more diversity there, especially in STEM fields. Though their new hires have been more diverse, he said, they have no role models. White males are still AFTAC’s primary demographic. The symposium is one of the steps he has been taking in response to the problem. According to Worley, the event marked a “bigger conversation” and the “beginning of a dialogue” about all diversity in the workplace, starting with women in STEM but eventually moving into other areas. He hopes to host a symposium every year.

The featured speaker on Wednesday, the first day of the two-day symposium, addressed that larger plan. Dr. Sue Wilson-Yates, former manager of environmental affairs and institutional products for the Colgate-Palmolive Company, gave a talk on “Embracing a Diverse Workforce,” and touched on everything from gender, age and race diversity to diversity of personal idiosyncrasies. “Scientists are sometimes strange!” she said, which drew appreciative laughter from the audience. “We had one scientist walk around in his socks all day — no shoes.”

The symposium was open to any interested U.S. citizen, and more than 225 civilians and Air Force personnel attended on both days. Wednesday’s events were held in the Doyle Northrup Auditorium, a cell-phone-free zone that put a damper on any potential live tweeting. It didn’t stop the overall good vibe, though, especially as Dr. Eileen K. Preisser, senior Air Force representative to the National Geospatial-Intelligence Agency, gave the keynote presentation: “The Science Behind the Pursuit of Happiness.”

Yates’ presentation followed Preisser’s. After lunch, attendees enjoyed a moderated panel of five noteworthy women in STEM, including Janet Petro, the deputy director of Kennedy Space Center, and Clara Wright, a materials engineer with NASA. The panel was entitled “Personal Career Perspectives from Notable STEM Leaders,” and the panel members answered questions about challenges they’d faced, people who influenced their career choice, mentorships, and other advice for women entering (or already in) STEM fields.

“The first lesson I learned was that your mentors don’t have to look like you,” Petro said while on the panel. When she graduated from West Point in 1981, female mentors in her field were few and far between, so she gladly accepted help from the men who went before her.

Petro and Wright were both asked to speak on the panel and were excited to do so. When asked in an interview later, they agreed that they have seen little to no change in gender diversity throughout the aerospace industry, but that hiring has also been down, which doesn’t help.

Still, they don’t intend to let any of that get in their way. “We’re really excited at Kennedy for the future,” Petro said. “We’ve got a lot of neat things going on, looking forward to the EFT-1 launch coming up this December. It’ll be a big proof of concept for our Orion capsule on a Delta IV so we are very excited for that.”

“It’s amazing at NASA the things we do regardless of what’s going on in the political arena,” Wright said. “We always find a way to get things done and the team really pulls together to get these things done.” The second day of the symposium was held in the Defense Equal Opportunity Management Institute (DEOMI) on the base, where all the usual electronic devices were permitted. “Diversity and Inclusion” was the keynote presentation, given by Preisser as well as Mary Lockhart, CEO and president of PEMDAS technologies.

After that, the crowd split up three times throughout the day to attend one of several talks that were given concurrently in different rooms. Some of the sessions included “What are Women in Defense and How We Support You,” “Preparing the Next Generation of WISE,” “Practical Advice for a Successful STEM Career,” “How to Handle Difficult Conversations,” and “Environmental Remediation.”

“I’m just glad to see women speakers and women in leadership positions,” said Jennifer Sachs, a mechanical engineer with Boeing, when SpaceFlight Insider asked her about the event. “We don’t have a whole lot of them in our area, especially in engineering. Whereas at this event it’s all pretty much women standing up, talking, and you want to emulate that.”

Sachs attended the event with her coworkers Amy Ebert, a structural analyst, and Kristin Freeman, a systems engineer. They all work on NASA’s Space Launch System (SLS) in Boeing’s aerospace division, and their director encouraged them to attend the symposium. All three said they have not encountered gender discrimination in their workplace, even when choosing to start a family.

“I’m kind of young enough that I was able to be part of all those efforts to encourage women to get into STEM and to stay with it,” Ebert said. “I was definitely one of those kids that did not get straight As in college. But I had a lot of support and the school that I chose to go to was one that was severely lacking in women, so there was lots of opportunity and lots of support there to keep me going doing what I was doing. And then the same thing once I got into the professional world.”

I attended the WiSE symposium last week. I retired from AFTAC after 22 years of active duty military service in 1998…and have supported AFTAC missions through various government contracts since. Our company, Kegman Inc, is an Economically Disadvantaged Women Owned/Veteran Owned small business in Melbourne FL. We support the Space Coast Women In Defense, where we helped established the Space Coast STEM Education Council. AFTAC scientist, engineers, and analyst are among the finest in our nation–we are excited for the opportunity to leverage this resource to inspire youthful talent in our county. Thank you for posting this article.