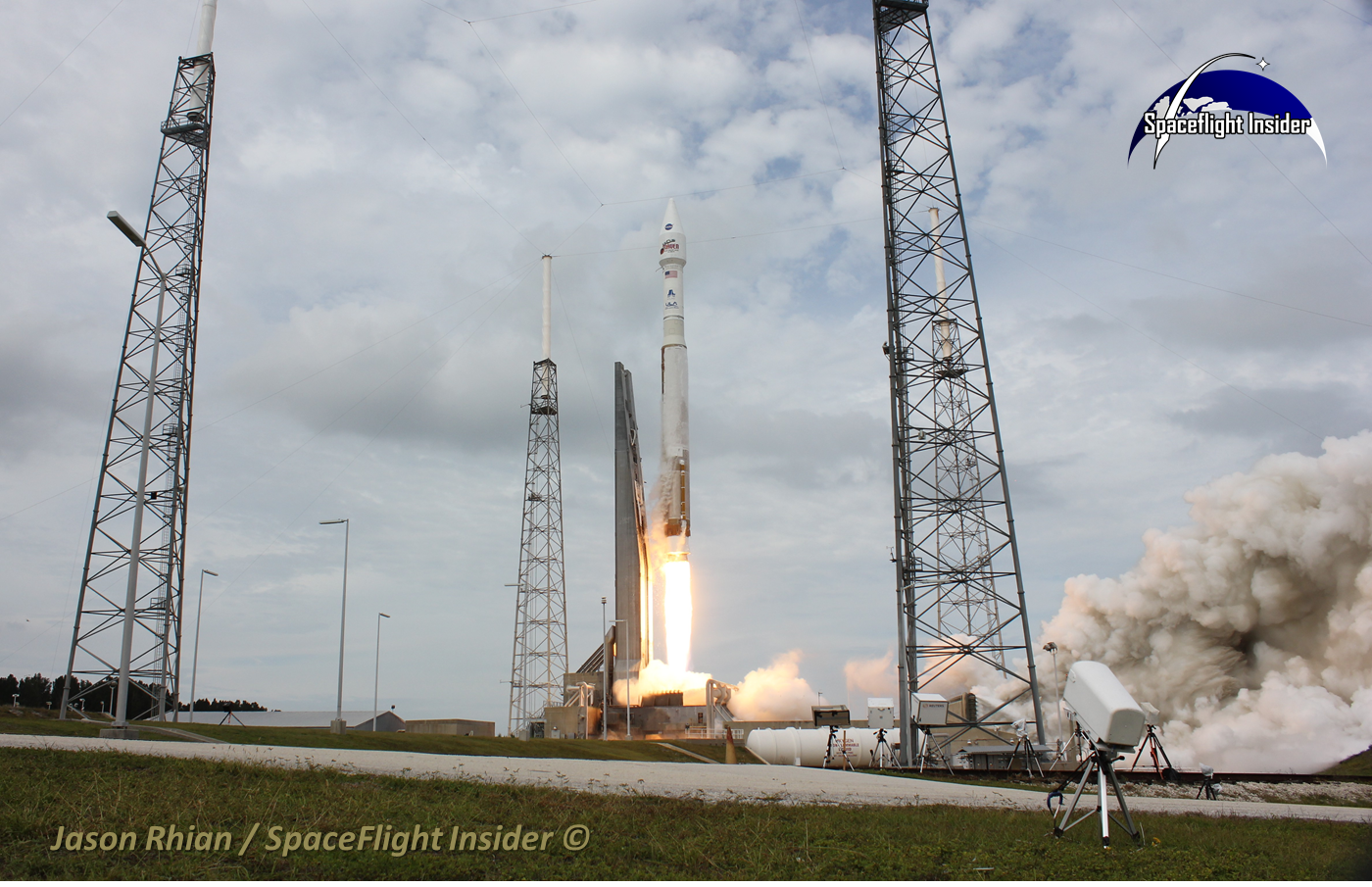 CAPE CANAVERAL, Fla. – “We’re going to Mars!” Those excited words were how the Principal Investigator for NASA’s Mars Atmosphere and Volatile EvolutionN (MAVEN) spacecraft summed up today’s events. United Launch Alliance (ULA) successfully sent the MAVEN spacecraft out of Earth’s gravity well and on its way to the Red Planet at 1:28 p.m. EST at the very beginning of the launch window. Liftoff occurred at historic Space Launch Complex 41 (SLC-41) located at Cape Canaveral Air Force Station in Florida.

ULA tapped the venerable Atlas V rocket in the “401” configuration (a four-meter fairing, no solid rocket boosters and a single engine in the rocket’s upper stage). Throughout the final hours leading to launch, the weather was mostly clear with light winds. Right before launch it became overcast – but still “green” in terms of launch conditions. Engineers did not see any technical issues and the lead up to launch was a textbook operation. This was a far cry from just a little over a month earlier when the chaotic state of the federal government threatened to see the mission delayed – by as much as two years.

Despite the disruption caused by the shutdown of the U.S. federal government, MAVEN launch at the opening of its launch window on Nov. 18 at 1:28 p.m. EST. Photo Credit: Jason Rhian / SpaceFlight Insider

MAVEN was allowed to continue processing despite the government shutdown which had stymied many of the space agency’s other efforts (an estimated 97 percent of NASA’s efforts were shuttered during the government shutdown). A special exception was issued which allowed work to continue. Had this exception not been agreed upon, MAVEN would have had to wait until 2016 before it could begin its mission. The mission would have had to wait until Mars and Earth were in the proper alignment for an optimal insertion into Mars orbit.

The Atlas V 401 is one of the smaller launch vehicles used in the U.S., one would not know it from today’s launch, however. The rumbling thunder of the RD-180 engine (the first stage has a single Russian-built RD-180 with two nozzles directing thrust) setting off car alarms and rattling windows across the center and for miles around. The MAVEN spacecraft will spend one year orbiting the surface of Mars working to determine why the thin Martian atmosphere is in the state we see it today. Photo Credit: Jeff Seibert / SpaceFlight Insider

MAVEN will study the thin atmosphere (Mars’ atmosphere is less than 1 percent that of Earth’s and is comprised predominantly of carbon dioxide) surrounding Mars – in an effort to determine why it is as we see it today. The mission’s primary objectives are as follows:

To complete its mission, MAVEN is carrying eight scientific instruments. For one of the MAVEN team members, David Mitchell, the NASA MAVEN mission Manager, each instrument is important in its own right.

“I can’t pick just one. That’s tough, that’s like which kid do you like the most, there’s eight of them and they’re all special in their own right,” Mitchell said.

“We really do believe that in the past Mars was a planet much like Earth is today and we want to know what happened,” said NASA’s Administrator Charles Bolden during a question-and-answer session held in front of the Atlas V pad the day before the launch. “MAVEN is going to help us to accomplish that […] this is another important step in the leading to when we send humans to Mars in the 2030s.”

Bolden had traveled to Florida’s Space Coast on a tour of recent activity at KSC. The day before the launch he was at the Operations and Checkout building to view the Orion spacecraft which will conduct the Exploration Flight Test 1 mission in September 2014. Shortly thereafter he was at SLC-41 where he made remarks tying the MAVEN and NASA’s other current Mars missions to plans to send astronauts to the Red Planet in the 2030s. As with many NASA events, this one hosted a social to allow regular citizens to attend the launch and to promote NASA’s efforts on various forms of social media. Signs directing viewers to “Barsoom,” the fictional name given to Mars by author Edgar Rice Burroughs were posted across the space center.

The spacecraft will join NASA’s Mars Reconnaissance Orbiter and Mars Odyssey spacecraft along with the European Space Agency’s Mars Express currently circling the Red Planet’s endless dunes and frozen vistas. There are also two rovers, the Mars Exploration Rover, Opportunity which touched down on the planet in 2004 and the Mars Science Laboratory rover Curiosity which landed in August of 2012. While the public might view this as just an unmanned mission, one key NASA official has a different perspective.

“[…] we have humans going to Mars with the MAVEN mission, because, in the end these robotic explorers are about people doing science and the last time I checked, being a scientist, at least people tell me – I am human (laughs), as are the other people on the science team,” said NASA’s Associate Administrator for the space agency’s Science Mission Directorate, John Grunsfeld. NASA’s Associate Administrator for the agency’s Science Mission Directorate John Grunsfeld detailed the need for a greater understanding of the dynamics behind the Martian atmosphere’s development during a Q&A at Space Launch Complex 41 the day prior to launch. Photo Credit: Jason Rhian / SpaceFlight Insider

For Jakosky, today’s events were just the most recent part on a journey that started a decade ago.

“We’ve been getting ready for this for ten years since we started the idea, we had to compete and people have been asking me all day today: ‘What is it like?’, ‘How do I feel?’ – and the only possible answer is that I am just beside myself,” Jakosky said. “To look around and see the launch services folks, Kennedy, all the support we’ve gotten – it’s been incredible. All I can say is ‘Hey we’re going to Mars!’”

If everything continues to go as planned, MAVEN should arrive at the Red Planet 10 months from now on Sept. 22, 2014. This will be NASA’s last mission to Mars until the planned InSight mission currently slated to launch in 2016. Photo Credit: Mike Barrett / SpaceFlight Insider

The launch marked a rare period of activity for Kennedy Space Center, which has been quiet since the end of the space  shuttle program. For ULA, the MAVEN mission is just one more flight to Mars. United Launch Alliance and its heritage companies, Boeing and Lockheed Martin have conducted every U.S. mission to Mars. MAVEN is the 11th launch the organization has conducted this year.

In terms of the overall mission’s current status, after an announcement that the spacecraft’s solar arrays had deployed about an hour after launch, the iconic voice of NASA’s George Diller stated in typical NASA understatement: “At this point everything is completely nominal.”