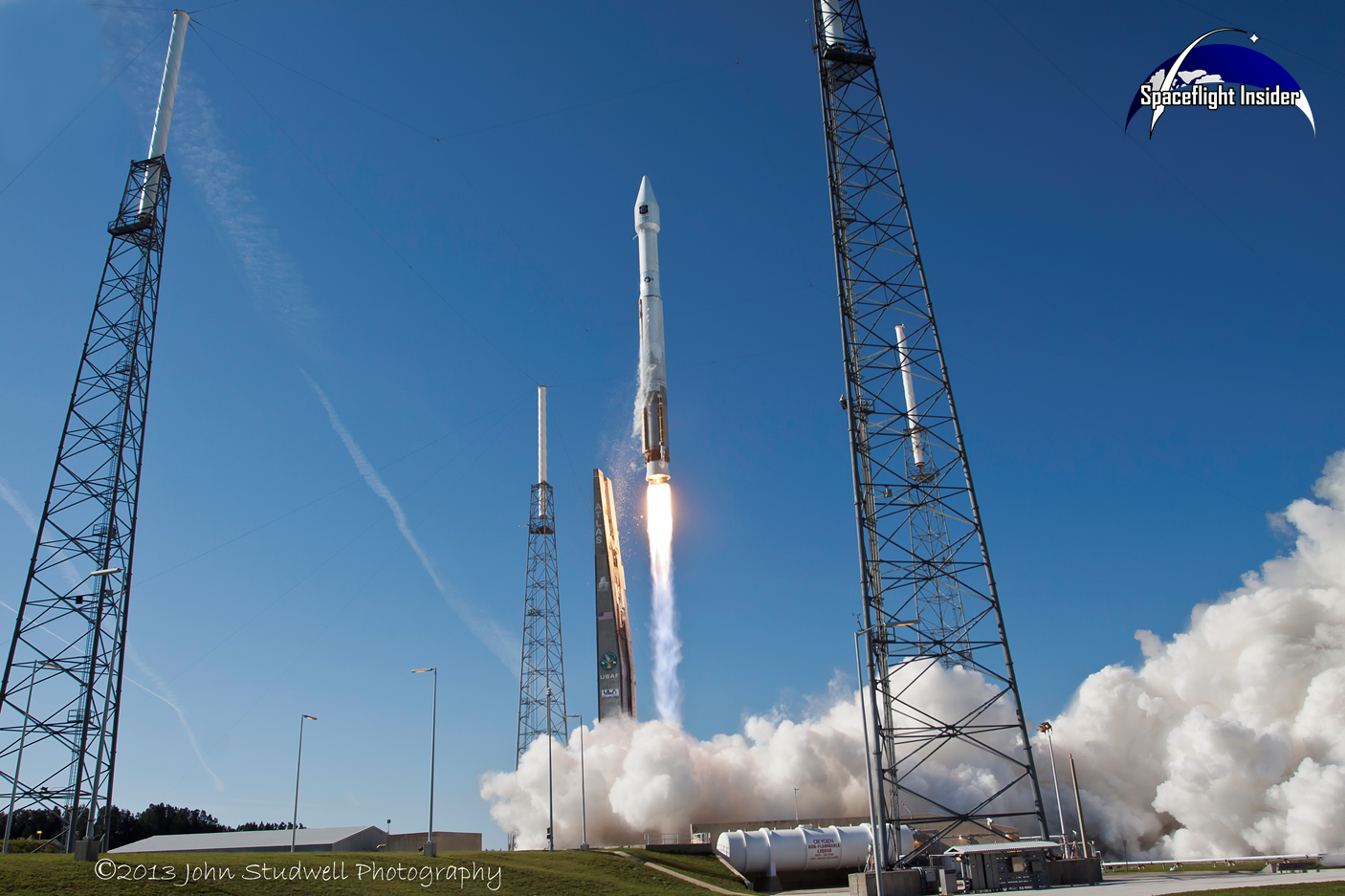 As with all Florida launches, the weather is the chief issue facing the planned launch of MAVEN. Liftoff is currently slated to take place at 1:28 p.m. EST. Photo Credit: John Studwell/ SpaceFlight Insider

CAPE CANAVERAL, Fla — United Launch Alliance (ULA) is getting ready to launch one of the company’s venerable Atlas V launch vehicles. This one? It will be ferrying NASA’s Mars Atmosphere and Volatile EvolutioN (MAVEN) spacecraft on its way to the Red Planet. Atlas will fly in the 401 configuration (that’s rocket scientist for a four meter fairing, no solid rocket boosters and a single engine in the rocket’s upper stage) from Cape Canaveral Air Force Station’s Space Launch Complex 41 (SLC-41) in Florida. Liftoff is currently set to take place November 18 at 1:28 p.m. EST. MAVEN will spend one year at the Red Planet looking for clues as to why Mar’s atmosphere is at its current tenuous state. Photo Credit: NASA / Kim Shiflett

The launch window extends for two hours. If you are in town and have never watched a rocket launch before? This is the one for you, it’s a NASA planetary mission on a launch vehicle that ascends very slowly (providing you with ample time to snap photos of the launch). Think only tourists are thinking about the best spots to watch the launch from? Think again.

“I’m hoping to be down to see the launch,” said NASA’s Chief Scientist Ellen Stofan during a recent interview. “I’m not sure where I would watch it from though.”

But where do you go to watch from? Which spots provide the best viewing opportunities? Which ones are horrible? What if you’re on a budget? Not all locations are ideal. While one spot might be perfect to view a Delta IV launch, that same spot could be terrible when viewing an Atlas V. This is due to the sheer geographical footprint of Cape Canaveral Air Force Station.

Okay, so you know that you’re going to see an Atlas V launch – one of the best, most affordable places to launch from – also happens to be at an iconic Florida location – the beach.

Playalinda Beach, just a short hop from Cape Canaveral has a clear view of SLC-41 as well as the rocket itself. Many experienced photojournalists have skipped going “on site” (Cape Canaveral) in order to record the launch from Playalinda. For a mere $5 you can gain entrance and enjoy one of the most amazing things the federal government does – while working on your tan. However, plan a bit ahead. The park closes at sunset and you should call to see if there are any other restrictions: 321-267-1110. There are a wide range of locations from which to view the launches of Cape Canaveral Air Force Station. However, which is the best in terms of Atlas launches? Photo Credit: John Studwell / SpaceFlight Insider

Going to be taking a cruise around that time – you are in for a treat. Port Canaveral is a highly popular public viewing spot – and it’s free! All you need to do is pull along the roadside on SR-528 or on SR-401. However, do yourself a favor, this method of rocket-watching has caught on and has become very popular – arrive early. You are approximately 10 miles away from the launch pad – but you can still hear the RD-180 engine proclaim loudly who’s the boss as it delivers MAVEN into the black.

While it might seem counter-intuitive, the Kennedy Space Center Visitor Complex is not the best spot to view the launch. From the Visitor Complex proper, the view is restricted with the many landmarks and guests making getting a clear view difficult. However, if you want to gain the full space “experience” – you can’t go wrong. You get to wander among the spacecraft and launch vehicles of days gone by, meet an astronaut and then cap all that off by seeing a launch. To find out more, click here: Kennedy Space Center Visitor Complex or call: 877.572.6401

As mentioned earlier, there are no solid rocket boosters on this rocket and it should rise skyward fairly slowly. Want to hear the iconic countdown procedure for yourself? No problem! Tune into 146.940 MHz and imagine you’re in launch control. As with all Florida launches, the weather is the chief issue facing the planned launch of MAVEN. Liftoff is currently slated to take place at 1:28 p.m. EST. Photo Credit: Jason Rhian / SpaceFlight Insider

Okay, you’ve figured out where you want to watch the launch from – how do you get there?

HOW TO GET TO PLAYALINDA BEACH:  Take HWY-1 through Titusville, be on the lookout for Garden Street / Route 406. Then you are going to want to go over the A Max Brewer Parkway Bridge. All you have to do know is stay on this road – it will take you right to Playalinda Beach. Normally there is loads of parking available, however, this is a launch day – one with a NASA spacecraft on board – cover your bases – get your spot as soon as possible. Click here for directions to Playalinda Beach

HOW TO GET TO PORT CANAVERAL:  Take SR-528, “The Beachline” toward Titusville. After you reach the Port Canaveral area, take “Exit A North Terminals.” Once you’ve done that you will cross over a small drawbridge, go around the curve in the road – this will take you right behind the port. If you are coming from the opposite direction (the east) you will travel from A1A (this will eventually become SR-528). Not to beat a dead horse – but be sure to arrive early! Click here for directions to the Port Canaveral area: Port Canaveral

Now what? Simple. Enjoy the experience. Take loads of pictures and video – to make everyone who couldn’t make it miserable!