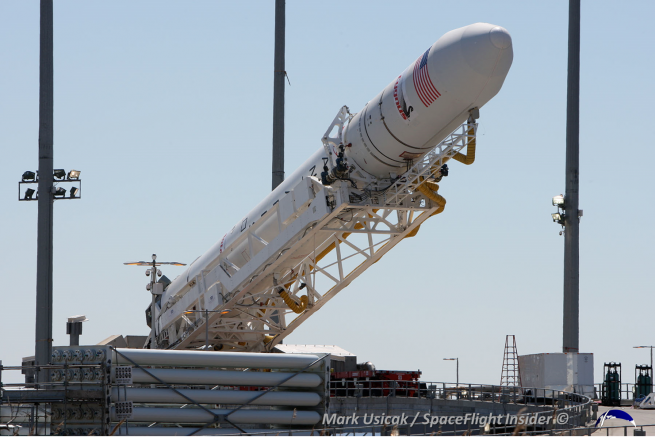 The decision to launch a cargo flight to the International Space Station next  week has been pushed back until Monday (Dec. 16) because of a cooling problem on  station that forced the shutdown of redundant systems, according to a NASA  update.

Orbital Sciences’ Cygnus commercial spacecraft is expected to blast off on  Dec. 18 from the Wallops Flight Facility in Virginia. However, with some station  systems offline, the launch does not now meet certain “commit criteria” to make  its journey to space next week, said Kenny Todd, the space station’s mission  integration and operations manager.

“We haven’t lost any primary functionality,” he said in a NASA Television  update today (Dec. 12), emphasizing that the six-person Expedition 38 crew is  fine. “There is some redundancy that we’re down right now, but that’s not  something I would call critical to day-to-day station operations.”

While a spacewalk is a possibility to fix the problem, it’s too early to say  what NASA and other space station partners will decide to do. Orbital Sciences Corporation has dubbed the next Cygnus spacecraft to berth to the ISS – the C. Gordon Fullerton, in honor of the astronaut who passed away earlier this year. Photo Credit: NASA

NASA controllers spent the night examining a control valve blamed for causing  an ammonia pump to shut down yesterday (Dec. 12). The space station uses  liquid ammonia to maintain its temperature, pumping the ammonia through external  radiators to bleed off heat. Astronauts have made periodic spacewalks to repair  parts of the ammonia system, most recently in May when Expedition 35 replaced a pump controller box on the P6  (far port) truss just days before some crew members went home.

“The pump module on one of ISS two external cooling loops automatically shut  down today when it got too cold,” stated the NASA Johnson Space Center Twitter feed yesterday (Dec.  11).

“The pump was brought back online, but they think a valve may not be working  correctly inside it. Some of the station’s internal electrical systems were  moved over to the second loop, and some noncritical things were powered down.  The crew was always safe and will work with the ground teams as they figure out  what caused the issue.”

Non-critical systems were powered down in the Harmony node, Columbus  Laboratory and Japanese Kibo laboratory. After confirming that the new  configuration was stable, controllers began this morning (EST) to move the  troublesome valve to several positions and monitor the effect on cooling  temperatures, according to a NASA TV update.

The crew is going about their activities as much as possible, although  they’re on a “reduced timeline” because some of the experiments aren’t running  as usual. (Science collected up to now is “not at risk”, Todd said.)

Responding to questions on social media, NASA astronaut Douglas Wheelock — who led three unplanned spacewalks in 2010 to replace a broken  ammonia pump module on the S1 truss in the same cooling loop — said he is  working with Mission Control to see what needs to be done next.

This article was written by Elizabeth Howell and originally appeared on Universe Today – it can be viewed here: ISS Issues