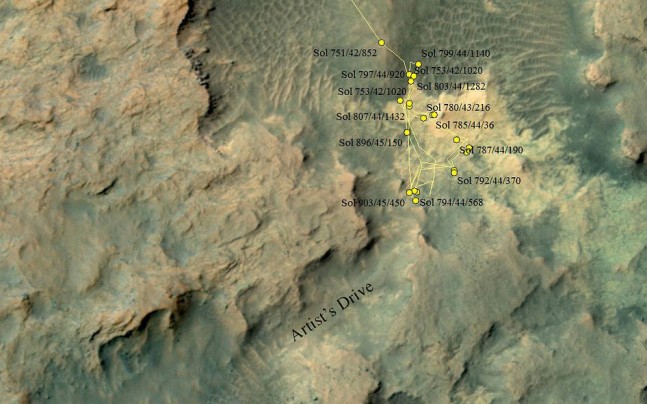 This area at the base of Mount Sharp on Mars includes a pale outcrop on the right, "Pahrump Hills", where NASA's Curiosity Mars rover worked for nearly six months, and the "Artist's Drive" route toward higher layers of the mountain. Image Credit: NASA/JPL-Caltech/Univ. of Arizona

After remaining still for several days in order to provide engineers a chance to diagnose a transient short circuit in its drill, NASA’s Mars Science Laboratory rover Curiosity is once again on the move. On Wednesday, March 11, Curiosity moved its robotic arm to transfer sample rock powder from its drill to its Chemistry and Mineralogy instrument (ChemMin). This is the same action that Curiosity was attempting when the short occurred on Feb. 27. The rock powder came from a rock target called “Telegraph Peak”, the third rock target that Curiosity drilled during nearly six months spent investigating the “Pahrump Hills” outcrop on Mount Sharp.

“That precious Telegraph Peak sample had been sitting in the arm, so tantalizingly close, for two weeks. We are really excited to get it delivered for analysis,” said Curiosity Project Scientist Ashwin Vasavada of NASA’s Jet Propulsion Laboratory, Pasadena, California.

The short circuit occurred while the rover was using the percussion action of its drill to shake sample rock powder from the drill to a sample collecting device on the arm. Tests conducted by the rover team determined that the most likely cause was a transient short in the motor for the drill’s percussion action. During numerous tests conducted in the last several days, the short was reproduced only once, on March 5. During that test, the short lasted less than one-hundredth of a second and did not stop the motor. The rover team is continuing to analyze data from the tests to develop guidelines for best use of Curiosity’s drill.

The rover has begun driving away from the Pahrump Hills outcrop where it had spent the last six months. On Thursday, March 12, it drove about 33 feet (about 10 meters) southwestward. The rover team plans on taking Curiosity through a valley called “Artist’s Drive” to reach higher geological layers of Mount Sharp. Curiosity is currently heading towards a rock outcrop known as “Garden City.” Great news and a huge credit to the Curiosity team.