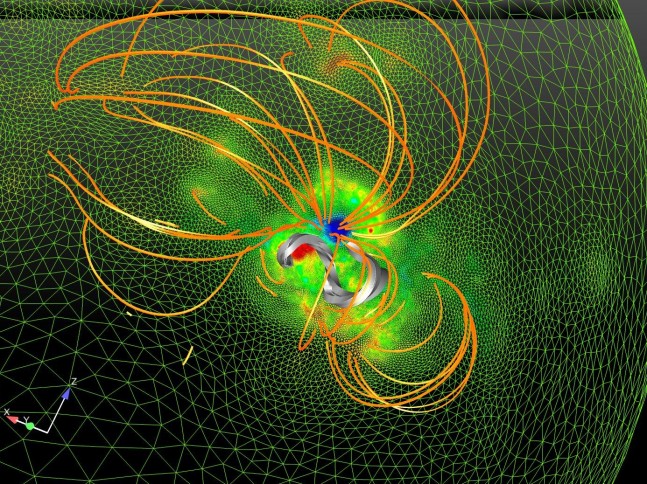 Cataclysmic explosions rock the solar system all the time, and most of humanity rarely notices. Such explosions are the subject of greater research as part of NASA’s Solar Dynamics Observatory (SDO), as scientists explore the phenomenon of these coronal mass ejections (CMEs). It turns out that even after 20 years worth of time examining the Sun’s violent weather – that there is still much to learn about the star that we orbit.

The Sun regularly spews out billions of tons of solar material in massive explosions measureable from Earth. Yet, while scientists know that such ejections are caused by the sudden release of built up magnetic energy, far less is known about how this magnetism builds in the first place, or what finally triggers an explosion. And understanding of how such explosions work is not only important for science, but also for better predicting when they will occur. Geomagnetic storms, which may be caused by CMEs, have the potential to damage satellites and even knock out power on the ground. Scientists are trying to understand the precise details of what creates giant explosions in the sun’s atmosphere, such as this solar eruption from Oct. 14, 2012. Image Credit: NASA/SDO/Amari.

As the NASA–European Space Agency (ESA) collaboration SOHO (the Solar and Heliospheric Observatory) turns twenty this year, the spacecraft is still contributing to our understanding of these questions. Coupled with data from Hinode (a solar collaboration between the US, UK, and Japan) and NASA’s SDO, a clearer picture of CMEs is taking shape.

SOHO was launched on Dec. 2, 1995 atop an Atlas IIAS rocket, before becoming fully operational in May 1996. In addition to studying the Sun in great detail, the observatory has discovered over 2,700 comets. Originally planned as a two year mission, SOHO is starting its 20th year in space and received approval to carry on until 2016.

Most recently, an article in the journal Nature published on Oct. 23, 2014 uses NASA data to elaborate on a theory of magnetic flux ropes. These ropes appear at the center of nascent coronal ejections, deep within the normal magnetic lines scientists are accustomed to seeing.

By incorporating a time-lapse measurement technique common in meteorology, the team investigating these explosions was able to explore two possibilities. “The first model,” as explained by NASA, “describes a situation in which a series of loops of magnetic fields on the sun – known as an arcade – is the start of every active region CME. This arcade has a weak point at the top, a place where the energy from below can burst through once it’s great enough. During the eruption a flux rope forms, which can be seen inside the CME as it surges away from the sun.”

“The second model assumes that the flux rope is there before the CME erupts. In this theory, no weak point is required. Instead, the flux rope gains more and more energy, and becomes increasingly unstable until a disturbance on the sun causes it to release the energy out into space.” A model of the eruption of a giant magnetic rope that led to a coronal mass ejection on the sun in Dec. 2006. The model showed that magnetic fields built up for several days before the eruption. Caption Credit: NASA; Image Credit: Image Credit: Amari/Ecole Poytechnique.

After a detailed evaluation of data on a CME from 2006, the team concluded that, “In this case no weak point up in the atmosphere was needed to allow the energy to be released.” According to Tahar Amari, first author on the Nature paper from Ecole Polytechnique in France, “There is, instead, a kind of critical value of energy, a value we can compute based on seeing an active magnetic region on the sun. Beneath that value the magnetic field will stay quiet. Above that, it is likely to erupt. There is also a critical height for rising flux rope, beyond which the magnetic loops above can no longer keep it confined.”

Yet, while this seems to suggest that the second model is more accurate in this case, Amari notes that this does not preclude other coronal mass ejections from erupting as a result of other factors.

Still, as NASA summarizes, “By measuring and calculating the magnetic fields on the sun, coupled with determining how to measure the critical tipping point where a CME can erupt, the paper offers new ways to determine the possibility of eruption from any given active area on the sun.” The paper’s conclusions bring us that much closer to truly understanding (and predicting) these enormous stellar eruptions.