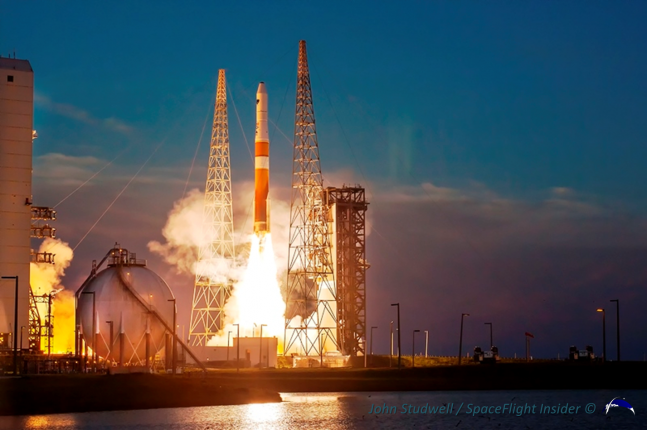 Tonight’s payload, a GPS IIF-6 satellite, is constructed by Boeing and is an integral part of the Global Positioning System – a constellation of satellites designed for both military and civilian use. Managed by the U.S. Air Force, GPS runs on a a twenty-four satellite network and broadcasts signals, collected by receivers in order to triangulate positions. For the GPS to run properly, four satellites must be visible to the location providing the positioning – currently there nine satellites visible at any time and at any location.

Each GPS satellite has a mass of 1,630 kilograms (3,530 lbs) and is designed with a twelve-year life expectancy. The GPS constellation is divided into six separate planes, labeled A-F, with four satellites and a space in each plane. GPS IIF-6 is on its way to plane D, filling the fourth spot. It will be replacing one of the oldest satellites in the system, a twenty year old satellite named USA-96 (GPS II-26/IIA-14). The weather for tonight’s launch saw clear skies and a light breeze – a far cry from the stormy conditions of the prior day. Photo Credit: Mike Howard / SpaceFlight Insider

GPS IIF-6 is part of the Block II or second generation satellite constellation and have all been redesigned and upgraded. The first generation consisted of 11 satellites and were originally intended to test the global navigation system. A total of nine Block II Rockwell-built GPS satellites were launch from February 1989 to October 1990 and are all no longer in service. Between 1990 and 1997, with the help of the Delta II 7925 rocket, 19 GPS IIA satellites were launched and the initial constellation was completed.

Originally Lockheed Martin was slated to construct 21 Block IIRs, which were designed to replace the older satellites in the constellation. The very first one, SVN42, was lost due to a Delta II failure in January 1997. The next twelve launches went off without a hitch, despite the initial failure and the next eight were upgraded to IIRM specifications. In 2009, the final IIRM lifted off from Space Launch Complex 17A carrying USA-206 into orbit.

In May 2010, the first IIF satellite, USA-213, was launched into orbit with tonight’s making the sixth IIF satellite launched. Block IIF satellite are able to be carried into orbit atop either an Atlas V or a Delta IV rocket. Every mission is named after a star, with today’s mission being named for the brightest star in the Orion Constellation – Rigel.

An Aerojet Rocketdyne RS-68 engine powers the Delta IV first stage, known as the Common Booster Core (CBC). The RS-68 was designed specifically for the Delta IV and tonight marks its 40th flight. Producing 2.95 meganewtons (301,000 kgf) of thrust at sea-level, the RS-68 burns cryogenic propellant (Hydrogen oxidized by liquid oxygen). The Delta Cryogenic Second Stage (DCSS), sits on top of the CBC and is powered by an RL 10B-2 engine. During liftoff, the two solid rocket motors help control thrust during the first stage.

“This successful launch demonstrates the reliability of our propulsion systems, coupled with the seamless integration of all our resources to provide vital capabilities for our military and benefits to our daily lives,” said Steve Bouley, vice president of Space Launch Systems at Aerojet Rocketdyne.

The Rocket responsible for carrying this payload into orbit is the Delta IV and is capable of five different flying configurations for different missions. The smallest, Delta IV Medium, has only been used in three missions, has no solid rocket boosters and only a 4-meter upper stage. Next is the Delta IV Medium +(4,2), used for tonight’s mission and has two solid rocket motors attached to the CBC. In this configuration, the stage has undergone modifications to provide the room needed for the GEM-60 solid rocket motors.

Approximately five seconds before liftoff, the RS-68 engine fired up, with the two solid rocket motors igniting as the countdown clock reached zero. Around eight seconds into the flight, the rocket began a series of pitch and yaw maneuvers necessary to attain the trajectory needed for orbital ascension. The Delta IV broke the sound barrier after 47 and a half seconds after liftoff. 13.2 second later, flying at an azimuth of 45.55 degrees, it passed through the area of maximum pressure. Ten minutes and 41.3 seconds later, the GPS IIF-6 satellite will separate from the rocket into its slot in medium Earth orbit. The satellite is expected to be called USA-251, will orbit the Earth at an altitude of 20,500 kilometers (12,700 miles) at an inclination of 55 degrees, completing one orbit every twelve hours.

This is the eighth American rocket to launch this year and the fifth by ULA in 2014. ULA was formed in 2006 and is a collaboration between Boeing and Lockheed Martin’s military launch departments. ULA is currently the sole provider of Evolved Expendable Launch Vehicle (EELV) and Delta II missions to the U.S. government as well as a subcontractor for commercial launches.

ULA’s Atlas V is set to launch yet again in just six days time. Next week’s mission will be for the National Reconnaissance Office’s NROL-33 mission. In July a rare Delta II mission is scheduled to deploy NASA’s Orbiting Carbon Observatory 2 satellite. Later in July, the Delta IV will launch the AFSPC-4 mission, deploying a pair of GSAAP satellites and the ANGELS technology demonstrator. The next GPS missions will liftoff in July and one in October, both aboard an Atlas V rocket.