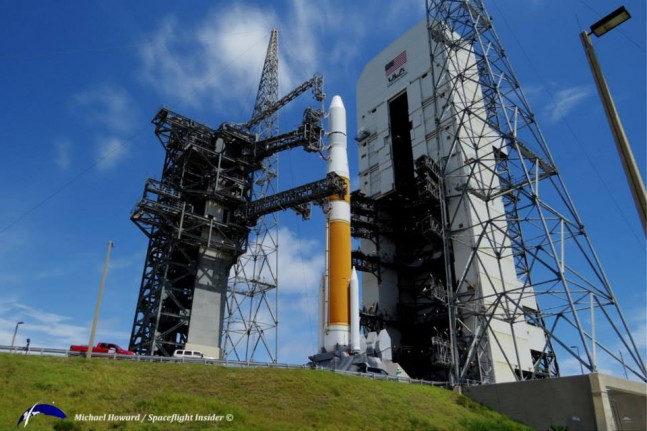 CAPE CANAVERAL, Fla. — Due to turbulent weather conditions, United Launch Alliance (ULA) will have to wait 24 hours before the next window opens to launch the United States Air Force’s GPS IIF-6 satellite aboard a Delta IV Medium+ (4,2) rocket. Liftoff was slated to take place at 8:08 p.m. EDT (0008 GMT) from Space Launch Complex 37 at Cape Canaveral Air Force Station. The launch has been rescheduled for Friday May 16, 2014 with a 19 minute launch window opening at 8:03 p.m. EDT (0003 GMT).

The scrub was announced within an hour of the launch time and was due to multiple weather criteria violations. Friday’s forecast dramatically improves with a 90 percent chance of favorable launch conditions compared to a 30 percent of favorable conditions on Thursday. Currently the only concerns for a Friday launch are potential solar activity and a minor chance of cloud violations.

SpaceFlight Insider will cover the launch live – tune into updates from Cape Canaveral starting one hour prior to launch!