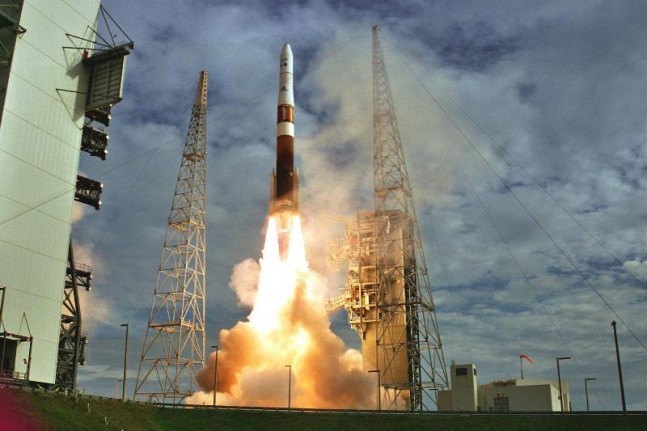 CAPE CANAVERAL, Fla – United Launch Alliance’s (ULA) Delta IV Medium+ (4,2) is set to launch the GPS IIF-6 satellite into orbit on May 15, 2014. This launch will mark the 6th of 12 Block IIF  satellites to launch and the second delivered to orbit so far in 2014, with a third to follow later in the year. Currently, liftoff is slated to take place at 8:08 p.m. EDT (0008 GMT) from Cape Canaveral Air Force Station’s Space Launch Complex 37B with a launch window lasting about 18 minutes.

The IIF satellites are viewed as being vital for the GPS constellation and the continuation of GPS services over the next 15 years as outdated satellites are replaced with newer, more capable versions.

The turbulent Florida weather will play a large role in whether-or-not this launch attempt is successful as currently there is a 70 percent chance of weather interfering with the launch. Right now there is an area of high pressure just north of the Cape, bringing in weather which has mission planners concerned.

As it gets closer to Thursday and the front moves in, anvil and cumulus clouds violations as well as lightning violations are likely. The 45th Weather Squadron issued the following weather forecast statement: There are two systems being monitored that could impact the launch. The first is a frontal system moving into the Southeast U.S. that will move into Central Florida on Thursday and clear the area by Friday morning. The second is a weak tropical wave moving through the Bahamas. Solar activity is also being closely monitored due to numerous active sunspots with the potential for solar flares, potentially causing high proton-flux levels – another violation of launch criteria. If the launch is delayed 24 hours, the weather conditions dramatically improve with a 70 percent favorable chance of acceptable conditions.

The Global Positioning System (GPS) is operated by the U.S. Air Force, this will mark the sixth launch as part of a maintenance/upgrading the constellation. The IIF-6 satellite is part of a new generation of Navigation Satellites, the first of these spacecraft was launched back in 1978. Right now there are 31 GPS satellites in the GPS constellation orbiting the planet, divided in to six different regions to ensure proper coverage. For GPS navigation to work properly, there needs to be four satellites visible to any one location providing the positioning data. Currently there are nine satellites visible from any given location at any time. GPS supplies accurate timing synchronization with amazing accuracy – to a few millionths of a second and positioning data with an accuracy of a few centimeters.

The Block IIF Satellites are based on the AS-4000 Satellite Bus and built by Boeing. Each satellite has a liftoff mass of 1,630 kilograms, and come equipped with two three-panel solar arrays that will be deployed for power generation. Together, the two solar arrays will supply the satellite with 1,900 Watts of power which will stored in NiH2 rechargeable batteries for use during any night passes. The GPS IIF class of satellites are stabilized with a three-axis zero momentum system, allowing the vehicles to fly with their nadir pointed at the Sun, in an Earth-oriented position.

Each satellite provides navigation data via Earth and Sun sensors and use reaction wheels for attitude control. They have a 16 Hydrazine thruster propulsion system perfect for any orbit adjustments. Thermal control is regulated with blankets, thermal coatings, radiators and electric heaters. The vehicle launches with 145 kilograms of propellant and twelve 4.5-Newton and four 22.2-Newton Rocket Engine Assemblies. Accurate navigation signals are provided by two high-stability Rubidium clocks and a single Caesium atomic clock. The IIF satellite signals are twice as accurate as previous models. Each satellite has the ability to supply M-Code Signals, which are secure, jam-resistant signals needed for military operations. The Block IIF satellites contain the L5 ‘Safety of Life’ Signal and RH32 reprogrammable central processors, capable of receiving in-orbit software updates. This IIF-6 satellite will orbit the planet for a minimum of 12 years and is replacing an outdated GPS IIA model.

“As each IIF satellite becomes operational, we continue the seamless transformation of the GPS constellation into an even more accurate, reliable and durable navigation resource for the U.S. military and the global civilian user community,” said Vice President and General Manager of Boeing Space & Intelligence Systems, Craig Cooning.

GPS IIF-6 will be launched into orbit at 20,459 kilometers at an inclination of 55 degrees aboard ULA’s Delta IV Medium 4.2 rocket. After orbital insertion, the satellite will undergo several weeks of testing before maneuvering into its final orbital position within the GPS constellation. An exploded view of the Delta IV Medium 4.2 along with the previous GPS IIF-5 payload. Image Credit: ULA

The Delta IV is the most advanced, reliable version of the Delta rocket to-date. With its simplistic design and demonstrated capability, the Delta IV is powered by the RS-68 engine – a hydrogen-burning rocket. The RS-68 is designed and manufactured by Aerojet Rocketdyne. The Delta IV also uses the RL 102B-2 and has the world’s largest carbon-carbon extendible nozzle. If a mission requires more thrust at liftoff, the Delta IV M configuration is used with either two or four Alliant Techsystems (ATK) manufactured GEM-60 solid rocket motors (SRMs).

The separation stage is initiated by ordinance thrusters with a radial thrust to eject the now empty SRMs. The Delta IV second stages use the RL10 propulsion system for second stage power. The impressive RL10 engine has a record of over 385 successful flights, 700 in space firings and are also manufactured by Pratt & Whitney Rocketdyne. Thursday’s launch will be a night launch and the added thrust of the Delta IV Medium means it will off the pad and on its way to space very quickly.