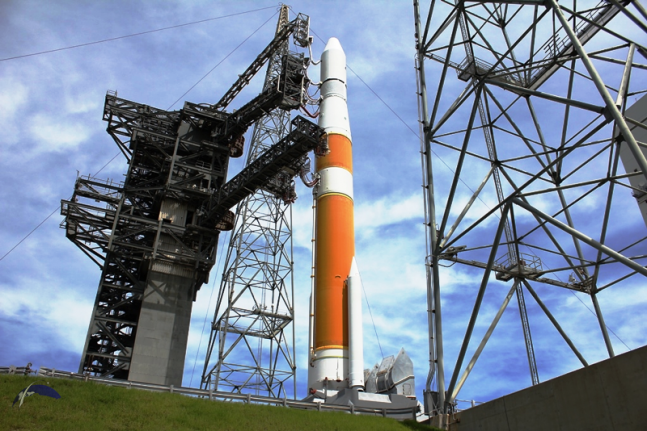 CAPE CANAVERAL, Fla — Colorado-based United Launch Alliance (ULA ) has one of the firm’s Delta IV Medium+ 4,2 rockets poised to launch several satellites on the AFSPC-4 mission for the U.S. Air Force. If all goes according to plan, the rocket will lift off from Cape Canaveral Air Force Station’s Space Launch Complex 37 Wednesday July 23 at 7:03 p.m. EDT (2303 GMT). At present, there is only a 30 percent chance of favorable weather for launch.

AFSPC-4 mission is a multi-satellite mission with part of the payload consisting of two Geosynchronous Space Situational Awareness Program (GSSAP) satellites. These will be placed in near-geosynchronous orbit. Also a part of this flight’s manifest is the Automated Navigation and Guidance Experiment for Local Space (ANGELS) satellite. One of the two GSSAP spacecraft. Image Credit: USAF / SNC

The two GSSAP spacecraft were constructed by Orbital Sciences Corporation (Orbital ) and will serve as part of the Space Surveillance Network (SSN) sensor. GSSAP will also be used by the Joint Functional Component Command for Space (JFCC SPACE). The twin GSSAP spacecraft are the first of their kind to be launched. They will be used to gain a better understanding of the nature and dynamics of items in near geosynchronous orbit as well as provide greater situational awareness of these objects. This should increase spaceflight safety and minimize the chances of objects striking one another on orbit.

With an increase in the volume of on orbit spacecraft and debris, the need for a system unhampered by Earth’s atmosphere to monitor these objects is becoming more and more critical. GSSAP will initially be controlled via the ground stations that are a part of the world-wide Air Force Satellite Control Network (AFSCN). stations. Normal operations will then be handed off to Schriever Air Force Base, CO where the 1st Space Operations Squadron (1 SOPS ) of the 50th Space Wing satellite operations will manage the two spacecraft.

A Space.com article about the recently-declassified mission details how GSSAP will orbit at a distance of some 22,300 miles above the Earth in the congest geosynchronous belt that encircles our world. In the article, written by SpaceFlight Now’s Stephen Clark, USAF General and the head of the U.S. Air Force’s Space Command, General William Shelton discussed the importance of this mission.

“GSSAP will produce a significant improvement in space object surveillance, not only for better collision avoidance but also for detecting threats,” Shelton said in a speech at the Air Warfare Symposium in Orlando, Fla. “GSSAP will bolster our ability to discern when adversaries attempt to avoid detection and to discover capabilities they may have which might be harmful to our critical assets at these higher altitudes.” The ANGELS satellite with the DCSS in the background. Image Credit: USAF

The ANGELS satellite will be managed by the U.S. Air Force’s Research Laboratory (AFRL) Space Vehicles Directorate.  Much like GSSAP, ANGELS is tasked with providing a better understanding of the environment on orbit, especially in regards of the nation’s space-based assets. The Department of Defense is one of the partners who will assist in both launch integration and flight operations of the ANGELS spacecraft.

ANGELS is a microsatellite with a planned mission life of about one year. The tiny spacecraft is tasked with testing out newly-devised spacecraft technologies along with operating methodologies. While small, the satellite has the needed equipment to validate these new systems. ANGELS contains a SSA sensor payload which will test techniques for detecting, tracking, and characterizing objects on orbit. ANGELS will test these techniques in a limited region, that surrounding the Delta IV’s second stage.

From its location the ANGELS spacecraft will validate maneuvering in geosynchronous earth orbit or “GEO.” ANGELS will also use a GPS system for GEO operations as well as accelerometers, devices that monitor the amount of acceleration. The GPS system is described by ULA as using advanced algorithms from NASA so the spacecraft can receive side lobe signals and create almost continuous navigation solutions. Tomorrow’s planned launch will mark the 8 of a total of 15 missions ULA is slated to carry out in 2014. Photo Credit: ULA

Over the course of several months, from a distance of approximately 31 miles (50 kilometers) the experimental satellite will negotiate its way to within a few kilometers of the Delta IV’s second stage. ANGELS will be aided in this effort by the accelerometers which will monitor the satellite’s speed in an attempt to increase guidance and navigations within the cluttered GEO environment. The ANGELS program began in 2007 and, like GSSAP, the prime contractor of the satellite is Orbital Sciences Corporation.

The Delta IV Medium+ 4,2 launch vehicle which has been tapped to carry out the first leg of this mission has been in service since 2002. Citing a lack of market for the vehicle, Boeing pulled the rocket from the commercial market. It was reintroduced in 2005 and a year later joined one of the three families of launch vehicles offered by the newly-formed United Launch Alliance (with the other two being the Atlas V and Delta II) which Boeing became a part of along with Lockheed Martin.

The version of the rocket which will take to the skies tomorrow is the Medium+ 4,2. Standing an impressive 206 feet (62 meters) tall, the rocket’s nomenclature details that this booster will utilize a four meter fairing and contain two GEM 60 Solid Rocket Motors provided by Utah-based ATK. Some 53 feet in length and five feet in diameter, the two SRMs are attached to the Delta IV via two ball-and-socket joints and structural thrusters.

ATK also produces the Payload Fairing or “PLF,” a composite two-piece shell that shields the spacecraft riding the Delta IV launch vehicle to orbit. The PLF adds some 38.5 feet (12 meters) to the Delta IV’s overall height.

The component that the ANGELS spacecraft will depend on to carry out its experiments, the Delta Cryogenic Second Stage (DCSS), uses structurally rigid propellant tanks that are composed of isogrid aluminum ring forgings as well as spun-formed aluminum domes. DCSS is fueled by a mixture of liquid hydrogen and liquid oxygen which serves as the propellant for the DCSS’ sole RL10B-2 engine. Given the extreme temperatures required to handle fuels of this nature, the DCSS’ tanks come insulated with a combination of sprayed-on and bonded-on insulation as well as helium-purge blankets. The vehicle’s electronics are supported via an equipment shelf affixed to the dome of the DCSS liquid oxygen tank. “As with all launches, mission success is our primary focus.  Extending our legacy of reliable propulsion, supporting on-time launch, and doing so while lifting our nation’s most critical spacecraft to their intended orbits, are at the heart of our jobs.  Spacecraft, like AFSPC-4 and others launched on our propulsion systems, enable national security objectives as well as benefit commercial activity in the U.S. and around the world.  We are proud to be part of the government industry team,” said Aerojet Rocketdyne’s vice president of Space Launch Systems Steve Bouley.

The RL10B-2, produced by Aerojet Rocketdyne, has a listed capability of producing an estimated 24,750 lbs of thrust. The RL10B-2 encountered an issue during the October 4, 2012 launch of the GPS-IIF-3 satellite. While in flight, a leak occurred at the narrow throat section of the thrust chamber of the engine. Due to the relatively small mass of the satellite and coupled with the abundant reserve of fuel, the GPS IIF-3 spacecraft was still able to be placed in its intended orbit. This anomaly caused the GPS IIF-5 mission to be delayed from October 2013 until February of 2014.

The Common Booster Core which comprises a majority of the rocket’s length is formed along similar lines as the DCSS. In terms of propulsion, the CBC’s thrust comes from the RS-68 rocket engine, which also utilizes liquid hydrogen and oxygen as fuel. The RS-68 is a substantially more powerful engine than the RL10-B, with an estimated capability of some 663,000 lbs of thrust at sea level. As noted, the CBC as the heart of the Delta IV launch system is controlled by the DCSS avionics system. AFSPC-4 will mark the 33rd mission that ULA has carried out on behalf of the U.S. Air Force. If everything goes according to plan, this mission will be the 85th launch the firm has conducted since its formation in 2006 and will be the 8th of fifteen planned launches the company has on its 2014 manifest.

This article was edited at 10:20 p.m. EDT to reflect the 10 percent decrease in favorable weather conditions for launch.