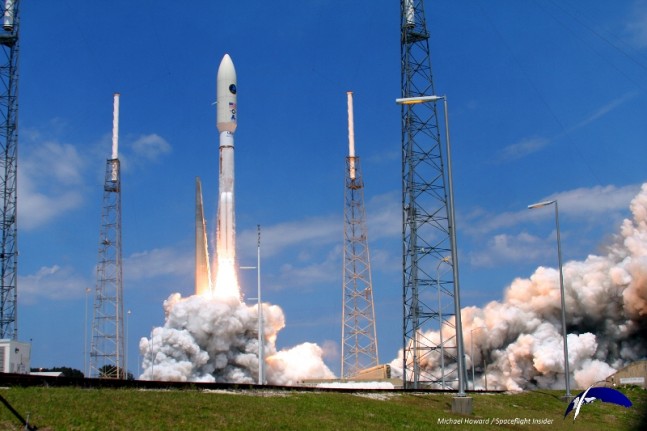 CAPE CANAVERAL, Fla — United Launch Alliance (ULA) successfully launched an Atlas V 541 rocket carrying the  NROL-67 payload from Cape Canaveral Air Force Station’s Space Launch Complex 41 on Thursday April 10 at  1:45 p.m. NROL-67 is a classified payload for the National Reconnaissance Office (NRO), the government department in charge of the nations surveillance satellites. The launch was originally scheduled for March 25 but was delayed due to a short circuit with the Eastern Range’s radar.  The 45th Space Wing, the group that manages the range, addressed the problems with a mandatory range asset that was necessary to conduct the launch.

The United States Air Force’s 45th Space Wing issued a release that detailed the range radar issue and its subsequent repair as follows: The Atlas V 541 rocket had been rolled back into the Vertical Assembly Building, which sits adjacent to SLC-41 after the range issues which scrubbed last month’s launch attempts. Photo Credit: ULA

An earlier investigation revealed a tracking radar experienced an electrical short, overheating the unit and rendering the radar inoperable. A radar that was previously in standby status has been brought back to operational status while the repair work is being accomplished.

Weather during the time of launch could not have been much better. Predictions proved accurate – with a 90 percent chance of favorable conditions for launch.

Moreover the team conducting today’s launch reported no issues which could have seen the mission halted or delayed.

NROL- 67 was launched atop a 541 variant of the Atlas V booster.  The 541 designation means that the rocket has a five meter fairing, four solid rocket boosters and a single engine in its Centaur booster.The first stage is powered by a RD-180 engine capable of producing 860,000 pounds of thrust at liftoff.

“We are honored to deliver this national security asset to orbit together with our customers the NRO Office of Space Launch and the Air Force,” said Jim Sponnick, ULA vice president, Atlas and Delta Programs. “Successfully launching two missions from two different coasts in just seven days is a testament to the team’s one-launch-at-a-time focus and ULA’s commitment to mission success and schedule reliability.”

The Atlas V’s tanks were brought up to pressure three minutes before liftoff. The rockets switched to internal power a minute later. The booster’s RD-180 engine ignited less than three seconds before liftoff. The rocket and its secret payload passed through the region of the atmosphere known as maximum dynamic pressure or “max-q” about a minute into the flight. This was the point of the mission when the Atlas was placed through the greatest amount of stress due to both the launch vehicle’s speed and the pressure of the atmosphere.  The RD-180 engine was throttled back at this point. Once the Atlas V launch vehicle had passed through max-q the engine was brought back up to full capacity. About 30 seconds later the four AJ60 solid rocket boosters had used up their fuel and were jettisoned. These four SRBs provided an estimated 1.5 million total pounds of thrust at liftoff, now however, they were little more than dead weight and were jettisoned. The spent boosters could easily be seen tumbling back to Earth. A short time later they splashed down in the Atlantic Ocean.

The Atlas V continued its flight powered only the RD-180 engine. About three and a half minutes into the flight the five-meter fairing, having completed its job of protecting the NROL-67 spacecraft as it made its way through Earth’s turbulent atmosphere, was jettisoned and fell back to Earth.

Once staging had occurred, the Centaur upper stage, powered by a single RL10A-4-2 rocket engine, took over the task of delivering the payload to orbit. This engine packs an impressive punch, some 22,300 pounds of thrust were delivered by the RL10A-4-2. The engine, fueled by a mixture of cryogenic liquid hydrogen and liquid oxygen, was aided in its mission by twelve thrusters, fueled by the highly-toxic substance hydrazine. The upper stage’s engine, along with these thrusters ensured that the classified payload reached its destination. Roll, yaw and pitch – all were provided by the Aerojet Rocketdyne-provided thrusters. This was a point highlighted by officials with the company.

At this point in the flight, the news blackout began. This is a common feature of NRO missions due to their classified status. No further updates on mission progress will be provided except for an eventual confirmation of successful orbital insertion.

The NROL-67 mission was ULA’s second Atlas V launch from the Cape this year following the launch of NASA’s Tracking and Data Relay Satellite “L” (TDRS-L) spacecraft in January. Meanwhile, SpaceX is currently preparing for the Falcon 9 v1.1 launch of CRS-3 which is scheduled to blast of from Cape Canaveral on April 14. For her part, the commander of the branch of the U.S. Air Force responsible for today’s mission expressed pride in the accomplishments of her staff.

“I am proud of the persistence and focus of the launch team, the wing, NRO, ULA and other mission partners, to make this launch happen,” said Brig. Gen. Nina Armango, 45th Space Wing commander, who also served as the Launch Decision Authority for the launch. “Our entire team worked together flawlessly once again to ensure mission success.”