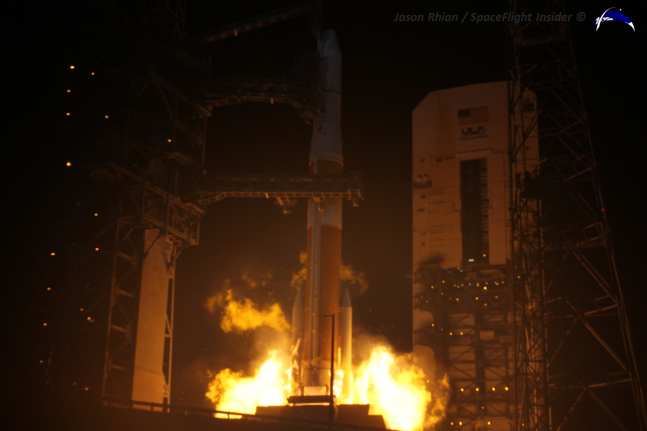 Tonight’s launch marked a comeback of sorts for the Delta IV which has not been used for the past six months due to concerns with the RL-10B-2 rocket engine in the Delta IV’s upper stage. Judging from the view (and sound) ULA provided this evening – it appears those issues are resolved and the rocket is back in service. A good thing too as the Delta IV family of rockets has four missions to carry out in 2014. Including a pivotal test flight for NASA. The Delta IV Medium + 4.2 is protected and worked on underneath what is known as the Mobile Service Tower. The day of launch, the building is moved back away from the rocket – the distance of a football field. Photo Credit: Jason Rhian / SpaceFlight Insider

The payload for this mission was the GPS IIF-5, a member of the Navstar GPS constellation of satellites constructed by Boeing. GPS IIF-5 will provide navigation to both civilian as well as military users. Once on orbit, it will be controlled by the U.S. Air Force’s 50th Space Wing, based out of Schriever Air Force Base in Colorado. This is the fifth of the Block II satellites to be sent aloft, the fourth on a Delta IV (GPS IIF-4 was launched atop an Atlas V 401). The GPS IIF-5 is encapsulated in its 4 meter fairing through its trip through Earth’s atmosphere. Photo Credit: Carleton Bailie / SpaceFlight Insider

The satellite weighs in at about 3, 590 lbs (1,630 kilograms) and is designed to provide services for about 12 years. GPS IIF-5 will be placed into a geosynchronous orbit of about 11,047 nautical miles at a 55 degree inclination.

The Delta IV is a flexible design with many variants in the launch vehicle’s family. This is possible due to the use of a Common Booster Core (CBC) design. The rocket can have various numbers of ATK-provided GEM-60 solid rocket motors (SRMs) attached to it depending on the orbital destination and weight of the payload. This means the Delta IV can fly with just a single CBC, between two to five SRMS or even three CBCs connected together to form the massive Delta IV Heavy version. All variants contain a Delta Cryogenic Second Stage or “DCSS.”

Officials on hand for this evening’s launch detailed how this particular version used different propulsion systems to achieve mission objectives.

The “4.2” in the rocket’s designation details that the rocket used a four-meter fairing which protects the payload through Earth’s turbulent atmosphere on ascent and two sold rocket motors. The fairing provides 38.5 feet to the rocket’s total height of 206 feet. Each of the SRMs measure some five feet in diameter and are 53 feet long. Both of the SRMs are affixed to the Delta IV by a pair of ball-and-socket joints and structural thrusters.

“The ‘structural thrusters’ are, essentially, springs. They push the SRMs a safe distance away from the rocket. The SRMs themselves are, in some aspects, similar to the solid boosters used on shuttle, the Delta II and what will be used on SLS.,” Meredith said. On a pillar of fire and smoke the Delta IV lifts off late in the launch window and in so doing conducted the 25th flight for this particular rocket. Photo Credit: Mike Howard / SpaceFlight Insider

On ascent, the rocket’s guidance, control and sequencing were handled by the DCSS’ avionics package for both the first and second stages of the mission. After transporting GPS IIF-5 out of the atmosphere, 16 pneumatic actuators pushed the fairing’s two segments apart. This evening’s launch had its own bit of drama taking place just prior to the launch window’s opening.

Concerns were raised by members of the launch control team some seven minutes prior to liftoff about solar radiation, this pushed the launch time back to the very close of the launch window. The conditions improved enough for the rocket to see a “green board” – and a thunderous ascent.

The roar of the RS-68 and GEM-60s caused an initial low rumble which built to a thunderous staccato crackling sound announcing to the surrounding wetlands that the Delta IV was on its way.

Launch itself started a few seconds before the rocket even left the pad. Just one second before liftoff, the two SRMs thundered to life – sending the rocket and its precious cargo leaping off the pad and into the night. These solid-fueled boosters were not activated until the RS-68 had been deemed in good shape and ready to conduct the mission.

As soon as the Delta IV had cleared the tower, the rocket went into a pitch-yaw-roll maneuver which placed it on the correct heading. In terms the trip “uphill” – the most challenging part of the rocket’s journey was yet to come.

About a minute into the mission, the Delta IV reached the part of Earth’s atmosphere that, when coupled with its speed, placed the launch vehicle under the greatest amount of stress during its flight. Dubbed maximum dynamic pressure, it is more commonly known as “max-q.”

A little more than 30 seconds later, the two GEM-60 SRMs were spent. At approximately 100 seconds elapsed mission time they were jettisoned, falling back to Earth and crashing into the Atlantic Ocean. About 15 seconds after what is known as “staging” (where the rocket’s first and second stages separate) the DCSS was ignited. The fairing, which shielded the satellite during its ride through Earth’s atmosphere at this point was no longer needed – and jettisoned. Its two halves were separated, revealing the GPS IIF-5 spacecraft. The first second stage cutoff or “SECO” took place at about 12 minutes into the flight, placing the DCSS and GPS IIF-5 into a parking orbit. The duo coasted for approximately nine more minutes. After this point, the DCSS reoriented itself for the next burn. SEO-2 took place after almost 25 minutes had elapsed.

Once SECO-3 was completed, the DCSS reoriented itself again, this time in preparation for payload separation which took place after three hours and 33 minutes.

The Delta IV flew in an easterly trajectory at a 105 degree azimuth, some three burns total were conducted to place GPS IIF-5 in the correct orbit. The flight’s telemetry was relayed via “TEL-4” located in Merritt Island as well as tracking stations located in Antigua, Ascension, Diego Garcia and Guam. Also providing telemetry assistances was one of NASA’s fleet of Tracking and Data Relay Satellites (TDRS).

The various elements which makeup the Delta IV come from points around the U.S. The RS-68 is manufactured in California, the RL-10B-2 in Florida, SRMs from Utah. The booster, second stage and payload fairing are all built in Alabama.

This year is a busy one for Colorado-based ULA. The firm has three more Delta IV launches planned, including the launch of the current heavy-weight in the U.S.’ launch vehicle arsenal – the Delta IV Heavy. The Heavy was tapped by NASA to send the first of its Orion Multi-Purpose Crew Vehicles on the Exploration Flight Test 1 this coming September. ULA will also launch the venerable Delta II this year, making a comeback of sorts and marking its 25th year of service. All total, ULA has some 15 missions on the 2014 launch manifest, with 13 still planed for the remainder of this year.

“The combination of propulsion systems on the Delta IV is truly impressive, and represents our ability to accurately and reliably position the nation’s most elite payloads into orbit,” said Steve Bouley, vice president of Space Launch Systems at Aerojet Rocketdyne. “It’s extremely rewarding for all of us here at Aerojet Rocketdyne to know we are contributing to the safety of our troops at home and overseas.”