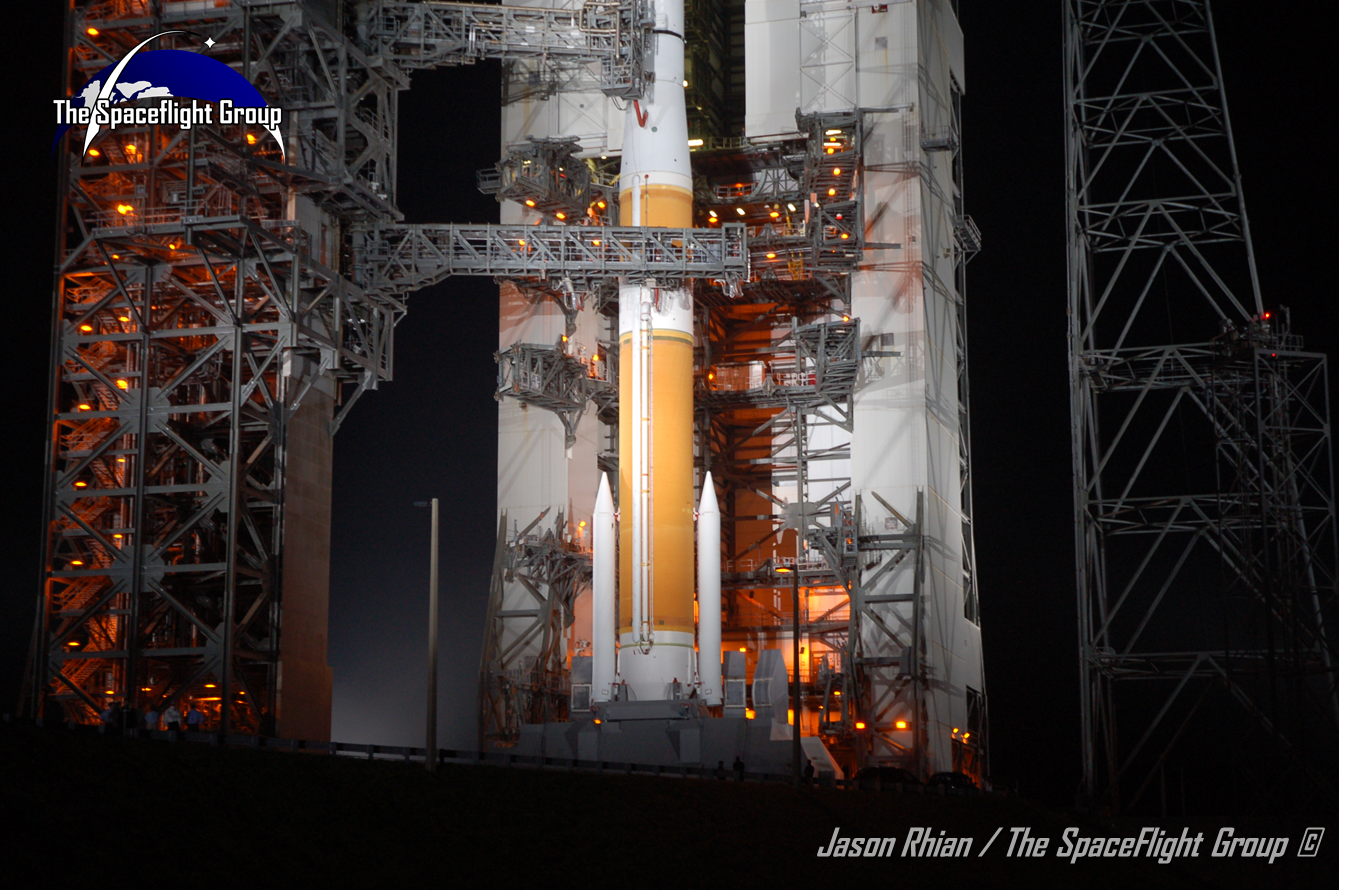 ULA has opted to delay the launch of a Delta IV Medium rocket that had been scheduled for next week. Photo Credit: Jason Rhian / The SpaceFlgith Group

CAPE CANAVERAL, FL – United Launch Alliance (ULA) has issued a statement regarding the launch delay of a Delta IV Medium+ 4.2 with its Global Positioning Satellite, GPS IIF-5, spacecraft payload. The launch had been slated to take place October 23. However, the launch of a similar Delta IV in October 2012 ran into problems with the RL-10 engine when the rocket’s engine encountered lower-than expected thrust.

Technicians who have been reviewing the data from last year’s flight have determined that the problems originated from a fuel leak. ULA issued the following statement about how it is proceeding: ULA opted to delay next week’s launch over issues that arose a year ago, during the launch of the GPS IIF 3 spacecraft. Photo Credit: Jason Rhian / The SpaceFlight Group

The ongoing Phase II investigation has included extremely detailed characterization and reconstructions of the instrumentation signatures obtained from the October 2012 launch and these have recently resulted in some updated conclusions related to dynamic responses that occurred on the engine system during the first engine start event.

ULA has decided to delay the launch to allow the technical team to ensure that they have the problem well-in-hand and that the modifications they have already implemented will perform as advertised. This is despite the fact that ULA has launched two Delta IV Medium and one Delta IV Heavy rockets since the October 2012 incident.

The Delta IV Medium tapped to launch the GPS IIF-5 mission had already completed the usual processing and checkout that is conducted at Space Launch Complex 37. Until a final determination can be made, the launch vehicle will be maintained at the pad until the assessment can be completed.

After this is done, launch processing will move forward and the GPS IIF-5 spacecraft will be mated to the Delta IV launch vehicle. Also after the launch assessment a new launch date will be set once the review is completed in the coming weeks.

The GPS IIF-5, as denoted by the final digit in its nomenclature, is the fifth in the series. The satellites are constructed mainly by Boeing. According to Spaceflight Now, the 3,400 pound satellite was delivered from Boeing’s factory in El Segundo, California to Florida where it underwent two month’s worth of testing.

In the interim, ULA will continue processing the Atlas V 401 rocket over at Space Launch Complex 41 for launch of NASA’s Mars Atmosphere Volatile EvolutioN or “MAVEN.” Launch is currently scheduled to take place on November 18. Despite the issues on the Oct. 12 launch, ULA launched two Delta IV Medium and one Delta IV Heavy rocket in between that incident and the current date. Photo Credit: John Studwell / The SpaceFlight Group